A heartbreaking photo of a Syrian child went viral. Here are 3 things we can do about it.

We can't unsee that photo of 5-year-old Omran Daqneesh. But now, we have a choice: We can turn away, or we can do something about it. 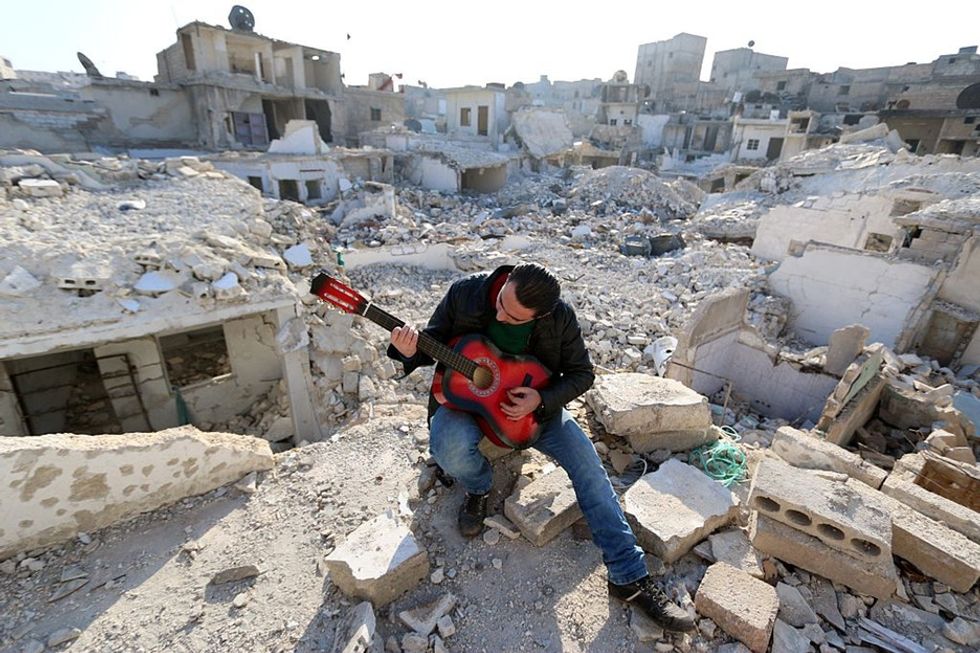 Plenty of other powerful and arresting moments have been caught on camera since the start of the Syrian civil war in 2011. But none of them have managed to send shockwaves around the world quite like this photo, taken by Mahmoud Raslan: a child dressed in dust and soot and a "CatDog" T-shirt, propped up in a bright orange ambulance seat that pops in sharp contrast to his ashen, gray appearance. He's young enough that he could even share a birthday with the raging conflict that still consumes his country — and judging by the blank expression on his bloodied, battered face, he may have lived his entire life in a war zone, too.

It's certainly an arresting image, and it's easy to understand why so many people have responded to it.

Perhaps the most remarkable thing about it is that Daqneesh and his family all survived the hospital airstrike that led to the moment the photograph was taken. Between the Assad regime and ISIS, nearly 500,000 other Syrians haven't been as lucky.

Over 18,000 of those casualties — including nearly 5,000 children — have come out of Aleppo, the city where Daqneesh and his family live. Military airstrikes from Russia and the Syrian government have targeted medical facilities in Aleppo held by rebels and humanitarian aid groups, in a blatant violation of Geneva Convention rules.

As a result, 95% of the doctors in the area have already fled the country, leaving only a handful of trained professionals to care for the 600 new urgent-care cases that happen every day in two hospitals. In fact, one of the very first casualties of the war was a cardiologist who was attending to injured protesters during the Arab Spring.

"By making it impossible for people to seek treatment when they were injured — even civilians and children and women who had nothing to do with the anti-government uprising but happened to live in areas that were under the control of opposition groups — they were being collectively punished," Ben Traub of the New Yorker explained in an interview with NPR.

We can't un-see that photo of Daqneesh. But now, we have a choice: We can turn away, or we can do something about it.

And if you're one to pick the latter option, here are three ways to start.

1. Donate to the doctors on the ground who continue bringing aid despite the threat of monstrous attacks.

But groups like the Syrian American Medical Society, INARA, Doctors Without Borders, and the International Medical Corps are out there risking life and limb to provide crucial care for those who need it most. You don't need surgery training of your own to help them out.

2. There are plenty of first-response groups in Aleppo trying to protect and save innocent people before they become casualties, and they could use your help as well.

Groups like The White Helmets, Islamic Relief, and the International Rescue Committee are in Syria, searching for victims after these horrendous airstrikes and finding ways to create some sort of "normal" society for them — providing beds, food, and education as best they can.

If more people volunteered their money and time, it would make it that much easier to make a difference.

3. Surviving through an armed conflict is a crucial first step. But people also need opportunities to build new communities and improve their lives.

Groups like the Karam Foundation, MercyCorps, UNICEF, and SOS Children's Villages provide educational programs to children along with that ever-important strategic training known as fun — giving children a chance at normalcy and relief, even in the most dire situations.

If you're interested in helping people of all ages get out of those scrappy, overcrowded refugee camps, you can donate to groups like Refugees Welcome, Migrant Offshore Aid Station, or the UNHCR. You can also take the time to educate yourself on your country's refugee entry policies and processes, and look into ways that your community can help improve those numbers and conditions.

Maybe it was easier to ignore the Syrian refugee crisis before it had a human face.

We can't put that knowledge back in the box. But we can do our best to understand this crisis and try to make a difference.

It's easy to feel down or overwhelmed by the awful state of violence in the world. It's easy to ignore the things you've seen and return to the bliss you felt before Omran Daqneesh's heartbreaking visage filled your screen.

But if we all step up and do our part in small ways, we can make the world better for kids like Daqneesh. Because remember: Despite the savagery of that photograph, Daqneesh is still alive. All is not lost.