A CNN reporter has a painfully obvious, must-watch lesson for men in the workplace. 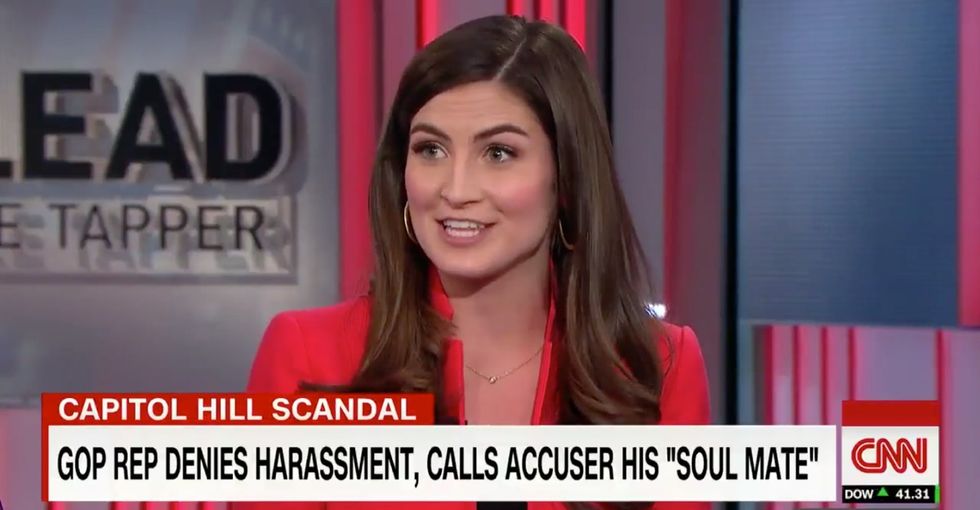 The 62-year-old married father of three admitted that he viewed the younger woman as "a soul mate" and allegedly got upset when he learned she was dating someone else, creating a hostile work environment that forced her out of her job. Based on interviews he's done since, it doesn't seem that he thinks there was anything wrong with his actions.

On the Jan. 24 episode of "The Lead with Jake Tapper," CNN White House reporter Kaitlan Collins shared a lesson for Meehan and other men.

"And when they start dating someone else, you cannot get angry with them for that and try to pay them money to cover it up," she continued, exasperated. "That is just a lesson I should not have to say to people. I'm a 25-year-old woman. I shouldn't have to say that to anyone, that when a woman goes to work, they don't want to date their boss."

It's really simple: If you're someone's boss, you shouldn't be getting hung up about who they're dating or expressing your own romantic feelings for them.

That's harassment. Even if feelings are mutual, supervisor-subordinate relationships are an extremely delicate issue that often invites trouble. With imbalances in power dynamics — say, if the person you're pursuing has to worry whether you'll fire them for rebuffing your advances — it's probably just best if you avoid the issue completely, keeping things professional in the workplace.

"When I discussed her boyfriend, I stated that I wished I could be better at accepting it right now but I probably needed a bit of time," Meehan told the Inquirer — a major indicator that his interest in his aide was inappropriate. In a letter to the woman, Meehan discussed going to the Vietnam Memorial, finding her last name, and tracing it back to someone with his own name.

Watch Collins offer up her lesson for grown men about the younger women who work for them below.