7 things we can learn about love from prehistoric humans.

Some of the lessons are funny, some are weird, and some are a relief! 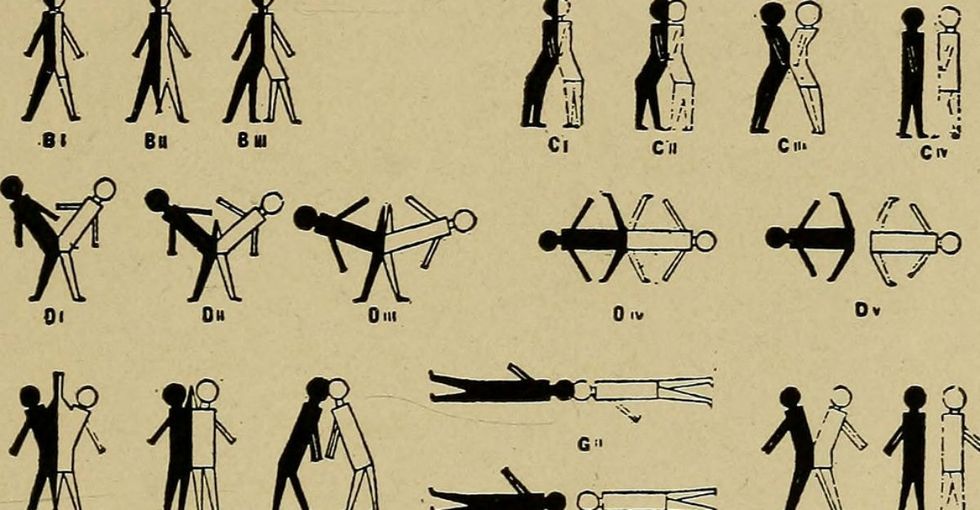 There's no time like the Valentine's Day season — a time when "traditional" love is celebrated — to ask, "What even IS traditional love?"

We're taught that it goes something like this: Be a virgin, find a soulmate, get married, NEVER CHEAT, share resources, have kids, and dance at your 50th wedding anniversary.

It's a lot of pressure. And, frankly, if it really worked that way, divorce rates would be at 0%.

Love, as we know it, doesn't work the same way for everyone.

Chris Ryan, co-author of "Sex at Dawn" puts it like this: "You can choose to wear shoes that are too small, but you can't choose to be comfortable in them."

In other words, our outdated beliefs about the nature of sex and relationships could be hurting many of us.

"Sex at Dawn" was published in 2010, but people are still talking about it.

The book looks into prehistoric human sexuality — it studies the behavior of bonobos and other primates in order to get at the true origins of human love. Though readers loved it for offering a more positive vision of evolutionary psychology than ones proposed by Darwin, Hobbes, and Freud, the book isn't without its critics.

Still, as a filter for anyone trying to make sense of modern love, "Sex at Dawn" has a lot to offer.

Some of the insights in "Sex at Dawn" might surprise you, some might comfort you, some may shock you. It's an interesting journey into the prehistoric past, and it might sound more familiar than you'd expect.

So let's enter the shame-free zone and discover seven things about love that everyone — single, married, and everything in-between — really needs to know.

1. Competition was never about who was the biggest, strongest, or richest.

Competition for mates didn't happen in our everyday actions, according to "Sex at Dawn." It all took place inside ... not our heads, but our bodies! The competitive advantage for males, prehistorically, wasn't decided in the ring of life, with men competing for wealth, status, and resources to woo a lady.

It was decided ... INSIDE THE FEMALE BODY. From the book:

"Rather, paternity was determined in the inner world of the female reproductive tract where every woman is equipped with mechanism for choosing among potential fathers at a cellular level."

So ovaries are the original matchmaker? And what they're matching is the right biological match from prehistoric ladies casting a very wide sex net?

The book is right when it states that this theory "turns the standard narrative inside out and upside down."

Though the book mostly offers observations, it does posit one solution to the problem many societies have with thinking of female sexuality as property. You know the kind — frustrated Internet commenters complaining about being put in the friend zone (as if they had some prior claim to sex with a woman but the zoning commission came and denied that access to them).

According to the authors, there's a way out.

"If you’re unhappy at the amount of sexual opportunity in your life, don’t blame the women. Instead, make sure they have equal access to power, wealth, and status. Then watch what happens."

3. It's totally natural to miss or still have strong feelings for your exes.

GIF via "The Notebook."

In the olden days, a man wouldn't have even known for sure if he was a child's dad. He (and every other dude — and lady for that matter) would have more likely just assumed that they were each child's parent and provided and cared for them accordingly.

"... we hypothesize that Socio-Erotic Exchanges [forms a] crucial, durable web of affection, affiliation, and mutual obligation. In evolutionary terms, it would be hard to overstate the importance of such networks."

So if you find yourself getting that old feeling, just chalk it up to some prehistoric memories of communal village life, in which overlapping relationships were more like a '70s rock band tour bus.

"For professional athletes, musicians, and their most enthusiastic female fans, as well as both male and female members of many foraging societies, overlapping, intersecting sexual relationships strengthen group cohesion and can offer a measure of security in an uncertain world."

Just not in the way you probably think.

It's all biology, baby. Meredith Small, an anthropologist cited in the book, suggests that during fertilization of a woman's egg, the egg actually may be reaching out and enveloping the sperm.

How's that for making the first move?

She goes on to emphasize:

"Female biology ... even at the level of egg and sperm interaction, doesn't necessarily dictate a docile stance."

5. Sexuality can be selfless.

Sex, in prehistory, was a way to bond your community together and provide a stable place for all the community's kids to grow, according to "Sex at Dawn."

I know. I'm a little scandalized by this as well. I'm a Methodist girl from Missouri; all this monogamish stuff is blowing my mind. But bear with me.

A story of elite World War II pilots stands out as an example of prehistory bumping into modernity.

In World War II, the book notes, elite pilots were facing the highest fatality rates in the military. They had wives and families; they had a community. But every time they went to fight, they risked abandoning and possibly hurting that community in their death.

How'd they respond? These elite fighter pilots started to ease up on the strictness of their marriages and began some of the first "key parties" on record. Rather than being scandalized, author Chris Ryan was moved.

"It was so moving to think about what motivated them to open their marriages with other couples. They were cultivating these webs of love, or at least real affection, because they knew that some of the men wouldn’t survive the war, and they wanted the widows to have as much support and love as possible. This confluence of selflessness and sexuality seemed to connect so directly to the hunter-gatherer groups, where men also have a high mortality rate from hunting accidents, falls, animal attacks, and so on. It was an unexpected yet very clear reflection of the distant past."

It's more subtle than that. And also, rude! This myth implies that all women trade sex for stuff, and that's not cool.

“As attentive readers may have noted, the standard narrative of heterosexual interaction boils down to prostitution: a woman exchanges her sexual services for access to resources."

Monogamy and relationships are assumed a default in our world. But they're not — they're a convenience born out of humans switching from hunter-gatherer mode to agriculture mode. The authors explain:

"... upheavals in human societies resulting from the shift to settled living in agricultural communities brought radical changes to women’s ability to survive. Suddenly, women lived in a world where they had to barter their reproductive capacity for access to the resources and protection they needed to survive."

The good news is because this possessiveness isn't an innate human thing, that means just as we were conditioned INTO objectifying and commodifying women, we can condition ourselves right on out of it.

7. Sex doesn't have to be so serious.

As Ryan said in an interview with Dan Savage, "We hope [the book] encourages and empowers people to give themselves a break, to cut themselves and their partners some slack."

"We need to chill out. Like music, sex can be sacred but it doesn't always have to be. Sometimes we hear God in a Bach toccata, but sometimes we're just dancing and having a good time listening to the Rolling Stones. Nothing sacred about it."

If you try sometimes, you get what you need. GIF via The Rolling Stones.

This book is an interesting read, and it definitely provides a different lens on the way human sexuality came to be.

And during this existential Valentine's Day season, new perspectives and no judgement are just what the world needs I think.