7 places around the world that have their own Thanksgiving-like holidays. 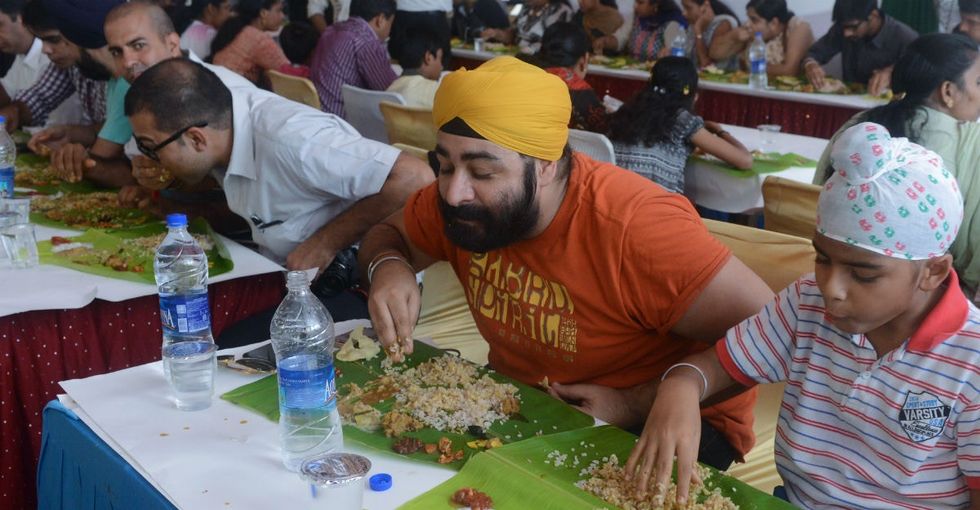 Food is something we all have a connection with — and not just because it keeps us alive.

Beyond the whole survival thing, food has a deeper meaning to most of us beyond chew, swallow, repeat. It plays a key role in many special occasions, from birthdays to weddings to funerals to political and religious traditions.

It serves as a centerpiece, gathering loved ones and strangers around it to feel comfort, energy, and security. No matter what’s going on around you, a good meal has the power to make everything feel OK, at least while it's being consumed.

As we honor Thanksgiving in the United States with turkey, green bean casserole (Midwest, represent!), and recliners, here’s a fun look at how different cultures around the world do something quite similar.

Koreans look forward to Chuseok every year, a major harvest festival and one their biggest holidays.

It's celebrated every year on the 15th day of the eighth month of the lunar calendar on the full moon. In 2016, it fell on Sept. 15.

The Chuseok festivities begin. Image via Republic of Korea/Flickr.

During Chuseok, family members from all over give thanks to their ancestors, spend time together, and celebrate with food and traditional Korean cultural experiences. You'll find families hosting ancestor memorial services, visiting grave sites, celebrating with traditional Korean wrestling and dancing, and feasting.

According to Visit Korea, one of the main dishes prepared during Chuseok is Songpyeon, a type of rice cake. It is formed into a small ball, filled with ingredients such as sesame seeds, beans, chestnuts, and then steamed.

Songpyeon, ready for consumption. Image via Republic of Korea/Flickr.

Traditional Korean folklore holds that the person who makes the best Songpyeon in the family will meet a good spouse or give birth to an adorable baby. I'm sure that provides a fun dose of competition between single family members.

You'll also find plenty of Jeon around the Chuseok holiday, which are Korean pancakes made by slicing fish, meat, and vegetables and then lightly frying them in a batter of flour and eggs. They. Are. Delicious.

Americans like to take credit for being first at a lot of things, but historians argue that Thanksgiving wouldn't make the list. That'd go to Canada.

Way back in 1578, an explorer named Martin Frobisher held a formal celebration to give thanks for surviving the treacherous voyage from Europe. That's decades before the Pilgrims arrived to the south.

Fast forward to today and Thanksgiving Day in Canada, also known as "Le Jour de l'Action de Grace," takes place every year on the second Monday in October. Why then and not in November like in the United States? One reason is that colder climates in Canada bring earlier harvest days; there is "thanks" to be given much sooner. (Also, holidays on Mondays are kind of amazing.)

Thanksgiving dishes in Canada mainly consist of the same dishes we eat in the U.S., though they are not always prepared on Thanksgiving Day — Canadians take advantage of their whole holiday weekend, often celebrating on any one of their days off.

Sharing is caring during the Thai Pongal festival in India.

Thai Pongal is a four-day harvest festival celebrated in Tamil Nadu, a southern state of India, as well as by millions of Tamilians living all over the world, in countries like Sri Lanka and Malaysia.

Taking place every January at the end of harvest season, it's a time of love and gratitude. Farmers express thanks for nature, for the sun, and for farm animals in helping with a successful harvest.

The food widely consumed during Pongal is actually in its name. Pongal means "to boil over" and it is a sweetened dish of rice boiled with lentils served on a banana leaf and dedicated to the sun god — Surya. You can bet every family has their own special recipe.

During Pongal, there's a big emphasis on sharing. Families share their Pongal and different fruits with neighbors and friends, and relatives to spread peace and gratitude for what they have in life.

For Jews, Sukkot is an incredibly joyful holiday that marks the end of harvest.

Taking place over seven days every fall, Sukkot is one of three biblically-based pilgrimage holidays in Judaism known as the Shalosh R'galim.

It's a significant holiday on two levels: It marks the end of harvest and commemorates the biblical Hebrews' 40 years of wandering the desert, living in temporary shelter, after their exodus from Egypt.

During Sukkot, you don't just talk about history, you re-enact parts of it. Some Jews build their own sukkah, a temporary hut-like structure, and eat in it throughout the days of the festival to pay homage to their ancestors.

A sukkah all set up. Image via RonAlmog/Flickr.

While there isn't a running list of traditional foods served during Sukkot, it's common to eat stuffed foods — like stuffed cabbage or stuffed peppers — that help to symbolize an overflowing harvest. Kreplach — a dish comprised of triangle-shaped pasta dough filled with meat — is also commonly served during Sukkot.

India's Onam festival is quite a sight with many bites.

The incredibly popular Hindu festival Onam is a harvest festival celebrated throughout the state of Kerala, India, between the months of August and September. People wait all year for this 10-day event.

I can see why.

Marked with many rituals, such as snake boat races and flower displays, the holiday is perhaps best known for its amount of food.

The Onam Sadhya is an elaborate feast during Onam where at least 11-12 dishes are prepared for one meal served on banana leaves. Some meals will have more than 25 types of curries to try. You could call it a food sampler's heaven.

Seren Taun — which literally translate as "to give" and "year" — is an annual Sundanese rice harvest festival and ceremony in West Java, Indonesia. Held in a number of traditional villages in the area, the festival marks the close of one agricultural year and the start of the next. It's a time to reflect, to thank God for an abundant harvest, and to pray for another successful harvest in the new year. And it's a time to dance and parade around. A lot.

During the Seren Taun ceremony, farmers have a ritual: They take their rice harvest and present it to a community leader to be stored in a communal barn.

It's all about the moon at China's Mid-Autumn Festival.

The festival, also referred to as the Lantern Festival or Mooncake Festival, is celebrated in China and in other east Asian countries when the moon is believed to be at its fullest and roundest. A full moon symbolizes fulfillment in life, with good fortune and love.

Loved ones reunite for meals and conversation. Lanterns light up the area, and people feast on mooncakes — a Chinese dessert — while admiring the moon above.

It's a mooncake! Image via Jimmie/Flickr.

Whether you eat mooncakes, turkey, 25 different curries, or cranberry sauce out of a can, every tradition is special in its own way.

Our cultures may vary from one another, but we're not all that different. We all have a shared longing to feel loved and secure. And eating and giving thanks together is a way to do just that.