6 weird, scientific tips for inspiring A+ ideas when you're stuck in a rut. 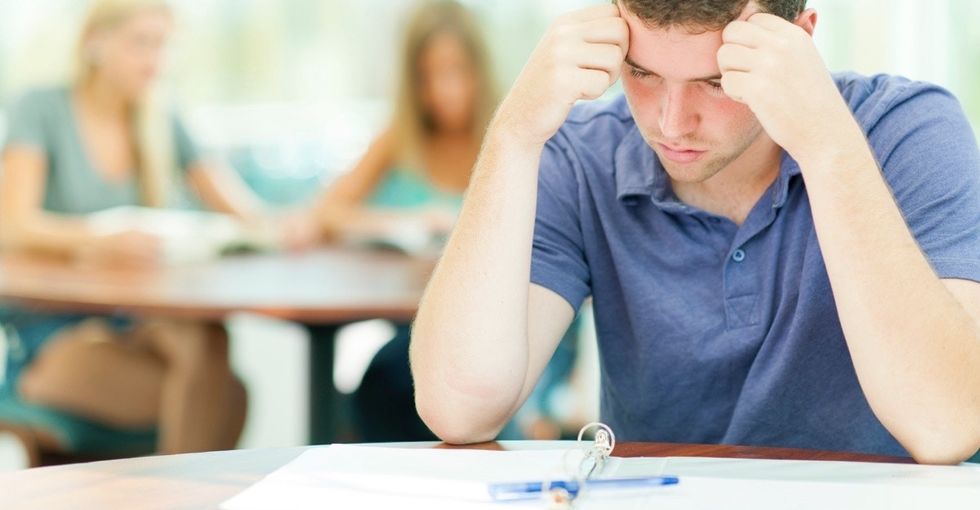 We've all experienced the struggle of trying to be creative on demand, only to be paralyzed by a major brain block.

You know how it goes. You sit down at your desk, ready to brainstorm some sweet ideas.

You have everything you need at your desk. You're good! You're high energy!

You need a big idea? Yeah! You have big ideas all the time!

When you're stuck for ideas, it might feel like you've hit a wall. Everyone's been in this position at some point or another, and we've all heard the standard "fixes" for this brain blockage — things to stimulate your brain like taking a walk, talking to a friend, or keeping a journal.

But ... what if those things don't work for you?

1. Work on your project at whatever time of day is usually your least productive.

Feel most alert early in the morning? You might want to wait 'til the late afternoon before trying to draft the next chapter in your novel.

In a 2011 experiment, participants were consistently more insightful at non-optimal times of the day compared to optimal ones.

It turns out that while being bright-eyed and bushy-tailed might be good for analytical tasks like logic puzzles or math, that highly focused energy can crowd out the eureka moments. But if you try writing that chapter at a time that doesn't feel optimal for you, you might find new solutions and possibilities come more easily.

2. Take a walk in a cemetery or think about death. No, seriously.

Trying to write a song and the lyrics just aren't coming? One weird way to force yourself to be more creative might be to think about death.

Many different studies — like this one about humor and this one about creative expression — have suggested that, under the right conditions, indulging our morbid sides might help unlock new ideas.

There are some caveats to this advice: For example, the humor study found that this only worked if participants were subconsciously shown morbid stuff, and the results of the creative expression study kind of fall apart if participants dwelled a little to much on their own mortality.

But if you're already in a creative rut, why not try doodling the reaper man, walking through a cemetery, or even just changing to your favorite "The Walking Dead" computer background? Who knows, a little subconscious morbidity might just help you find the inspiration for the muse you've been looking for.

3. Try turning off the lights and working in the dark.

If you need to come up with an elegant solution to a complicated coding problem, for example, it might be time to draw those shades and embrace the darkness like you're a vampire, or Batman.

We all want to be Batman. Photo via iStock.

“Darkness increases freedom from constraints, which in turn promotes creativity." That's according to two researchers in Germany who were studying employee creativity.

Turning the lights down low gives a greater sense of freedom and reduced inhibition, which can increase creativity and help us come up with new workarounds or solutions for whatever we're stuck on.

(By the way, if you regularly work in a dark environment, consider getting a screen dimmer, like f.lux, to reduce eyestrain.)

4. You know that co-worker or relative you never agree with? Show them where you're stuck.

If you've got to pitch an idea to your boss and it's just not coming, don't just reach out to your friends for help, because — in this case — your worst enemy might also be your creativity's best ally.

Craig, your exaggerated hand movements are getting problematic. Photo via iStock.

It might seem like every single office brainstorm starts with the phrase, "There are no bad ideas," but if you need something truly innovative, you should be seeking out dissent, not agreement.

Having to defend your ideas is not only a quick and easy way to expose any flaws in your thinking, but also helps bring up new viewpoints or snags you may not have considered before. If all your office buddy and you are doing is agreeing with each other, you're just listening to your own echoes and getting nowhere.

5. Take a few minutes to stir up some nostalgia by trawling through your old Facebook photos.

If all your paintings are starting to seem tired or you're stuck on the opening paragraph of your next essay, you might be able to jolt your creative muscle with a little nostalgia.

Like, remember that time we had actual physical photo albums? Photo via iStock.

In 2013, researchers in Hong Kong found that by asking study participants to remember nostalgic events, they could stimulate the participant's creative juices.

"Results showed that participants who were primed with nostalgic experience demonstrated higher creativity," said their paper.

So if you're feeling stuck, go ahead and open up those old pictures from college, try to ignore how awful your fashion sense was, and try to remember what that one professor's name was. It might just make your next painting a new Picasso or your essay an A-minus at least.

6. This last suggestion is the best one — have a drink.

Stuck on what to make your next YouTube video about? Can't figure out the perfect angle for the big pitch you need to deliver this week? I'm not advocating drinking at work or to excess (drink responsibly), but it turns out that being slightly tipsy can help people come up with more creative ideas.

Alcohol decreases focus, which is bad for analytical or intensive tasks but freeing for creative ones. Just don't take it too far — alcohol also makes it harder to weed out the bad ideas from the good ones! So brainstorm with a beer, sure, but it's still probably best you make any big decisions sober. The world doesn't need more "social experiment" videos.

Creativity is weird, but we can learn how to summon it.

We're still learning how the brain comes up with ideas, so take all these tips with a grain of salt. Creativity isn't as simple as the old left-brain = logic, right brain = emotion idea, for example. It's more like a conversation between many different parts of your brain.

And, of course, creativity only takes you so far if you're not also willing to work on it.

But if you're banging your head on a desk, despair not. Your brain is full of ideas, you've just got to unlock them. Maybe these tips can help.