23 photos from the '30s and '40s that prove your grandparents were so much more badass than you.

It's not even a contest. 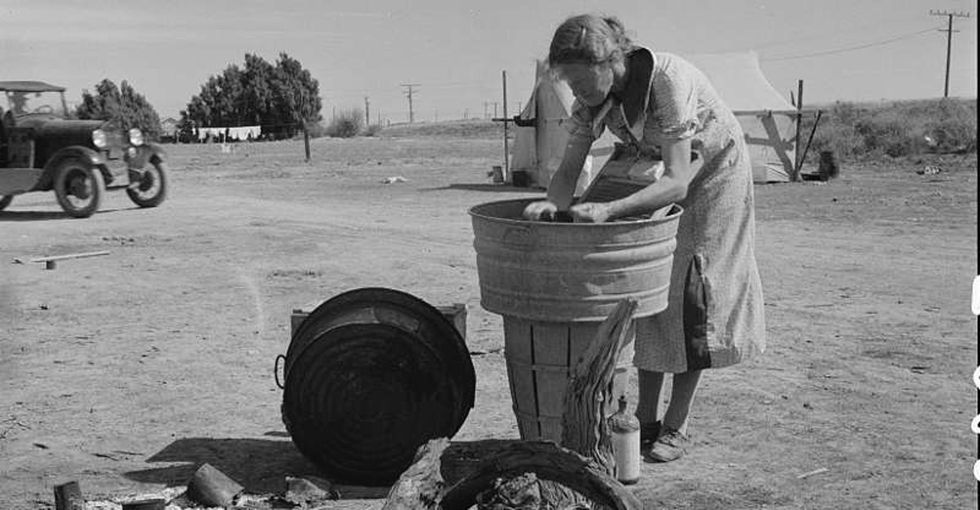 A light day at work for your grandpa in Pittsburgh, 1938. Photo by Arthur Rothstein/Farm Security Administration.

And now, there's photographic evidence to prove it.

Yale University recently released 170,000 photos from the Great Depression and World War II-era America: some classic, some obscure, many taken by New Deal government photographers, and all of them proving what bad MF'ers your grandparents were.

From California, to the Bronx, to Alabama, the parents of your parents did nothing but demonstrate their strength, hard work, and good ol' fashioned American can-do know-how just-try-coming-at-me-and-you'll-see-what-happens, time and time again.

Here are 23 of those times.

1. Your grandma, doing her laundry by hand in a metal bucket on top of a rickety wooden barrel

Oh, it's so hard to schlep your clothes all the way down to the basement? Well, here's your grandma in Dust Bowl-era California washing your dirty socks by hand in the middle of the street.

So, you know. Keep complaining.

Most likely, your grandma stuck it out in the cabbage fields until the beginning of World War II, when she and your grandpa found better paying industrial work that allowed them to move to the big city. Though if she was one of the thousands of the mostly Latino and Asian migrant workers who stuck around, there's a good chance she was part of one of the biggest workers' rights victories of all time two decades later, when many of California's agriculture laborers successfully agitated for their rights to unionize behind Cesar Chavez and United Farm Workers.

2. Your grandparents, dominating the dance floor so hard that everyone else just flat-out left

Little known fact: "The Club" was invented in Birney, Montana, in 1939, by your grandparents. There they are. Look at them go.

3. Your grandma, obviously knowing what's up

That's her in the middle. Her parents left their home, most likely in Oklahoma — or Texas, or Arkansas, or Missouri — and dragged her halfway across the country so they could find work picking vegetables.

Her friend on the left is jazzed, but your grandma knows the deal. She knows this is going to be some John Steinbeck ish. She's not here for any B.S.

4. Your grandpa, cutting these logs in half all by himself with nothing but an old rusty handsaw

How do you heat your home in winter when you live in rural Vermont and you've been waiting decades for the gas company to give you an activation date?

You burn wood. Lots of it.

Who volunteered to cut it? Your grandpa, that's who.

5. Your grandparents, working together to make humongous guns

The period between 1940 and 1945 saw a larger percentage increase of women in the labor force than at any other time in the 20th century, and right in the thick of it was your grandma, seen here in the top middle, making sure these giant guns were good 'n' killy.

6. Your grandpa, chilling on a stump

That beard. That is all.

7. Your grandma, straight-up carrying a chicken on her shoulder

That's your grandma, one of a small number of black farmers who received a loan from the Farm Security Administration. Like many New Deal programs, white farmers fared far better under the FSA, which provided much-needed financial assistance to struggling farmers. Not coincidentally, the resulting poverty, along with the persistence of socially sanctioned terrorism, prompted many black families from places like Manning, South Carolina, to join the Great Migration to northern cities that began several decades earlier, and would last until around 1970.

In the meantime, your grandma is happy just casually hanging onto this chicken that could peck her eyes out at literally any moment.

8. Your grandpa, manually cranking up his jamz on a radio rigged to the top of his tractor

This is how your grandpa did work — driving that farm machine real slow, bumping "Nice Work if You Can Get It" all around that Iowa cornfield.

9. Your 6-year-old grandma, babysitting your baby great-uncle by herself

Here's your grandma as a 6-year-old making sure her baby brother stays out of trouble. Her parents are hard at work at a nearby beet sugar farm in Hudson, Colorado, and she's on child care duty, despite being ... 6. Already more mature and responsible than you'll ever be.

10. Your grandma with the giant tree she just cut down while building a farm from scratch with her bare hands

There she is, clearing her own land in Thurston, Washington, leaning against the stump of a giant pine tree she probably just owned, looking suitably pleased with herself.

11. Your grandpa, rolling 200-pound barrels full of potatoes down the street

Or, as your grandpa called it, "the gym."

Migrant worker camps sprouted up all over agricultural areas during the Great Depression — not just out west. Here's one in Belle Glade, Florida, and there's your grandma, being a goddamn hero, and getting swole in the process.

13. Your grandpa, single-handedly dragging a car across the river on some old wooden planks

One morning in 1939, your grandpa was just hanging out, looking amazing in his hat somewhere in Gees Bend, Alabama, when a government agent and photographer rolled up and said, "Howdy, sir! You wouldn't mind taking our heavy-ass car across the river on your tiny ferry, would you?" And your grandpa was like, "Oh great. Sure. Yes. Love to. Totally..." while giving them the world's hardest side-eye.

But he did it. He freaking did it. All by himself.

14. Your grandma, churning butter with one hand basically tied behind her back like it's NBD

The most ridiculous part? Your grandma was a lefty.

15. Your grandpa, having the time of his life literally playing in the gutter.

Every time you feel a secret twinge of shame scrolling through Twitter in front of your grandpa, this is why.

16. Your grandpa, looking stone-cold in the world's dopest shades

As you sit at your desk, worried to the point of actual emotional distress that you might have to settle for the "bad" sandwich place for lunch today, here's a reminder that your grandpa worked in a factory in Ansonia, Connecticut, making metalworking equipment in 7-bazillion-degree heat, looking like the villain from a sci-fi horror film.

There he is holding onto some kind of rod, thinking a thought that will alter the universe as we know it.

17. Your grandpa ... actually, not sure about this one

Polishing the wheels of a go-kart? Checking the axles of a wheeled dogsled? I don't know. No idea what your grandpa is doing here. But whatever it is, it's obviously serious as all hell.

18. Your grandpa wrestling a cow, delighting the neighborhood children

These days, we try to amuse our kids by giving them free run of the iPad or plopping them in front of "Dolphin Tale 2" — yet somehow, they never seem satisfied. Your grandpa, on the other hand, understood that nothing entertains children more than watching man and beast locked in a physical struggle for supremacy.

The site of these events is now probably a Panera.

19. Your grandpa, watching the trains go by from on the actual train tracks

Your grandpa laughs in the face of danger.

20. Your grandpa, taking a nap on top of some dead fish

Oh, you stayed at the office 'til 9 p.m. last night putting together the pitch deck for the new clients?

Here's your grandpa sleeping on some fish barrels in Baltimore. By all means, feel sorry for yourself.

21. Your grandma, rocking out on a giant guitar

Here she is in her Salvation Army bonnet, bringing much-needed relief to the poor and needy in San Francisco. Though the Salvation Army hasn't looked quite so good recently, leading up to — and during — the Depression, the organization was omnipresent, feeding and housing what is technically referred to on the American West Coast as "hella" people. The Salvation Army also tried extra hard to make them Methodist, which, depending on your perspective, was likely either miracle balm for their eternal souls or annoying as hell.

These boys are all like, "Yo! Play that Woody Guthrie, Miss!" But your grandma just frowns and keeps rolling with the church music. Eventually, they like it. They always do.

22. Your grandpa, tolerating a ridiculous amount of racism just to get a drink of water

This is some B.S. your grandpa had to put up with on a daily basis.

Your daily reminder that racism ruins everything.

If this photo were taken today, it would launch a thousand Internet posts with titles like "This little girl and this calf are the best of friends and my heart just exploded." Some intrepid web reporters would somehow dig up a half-dozen more shots, and before too long, they'd have a book deal. As it is, we only have the one.

Let's just be glad we do.

Whether they're still alive or long passed on, your grandparents deserve our thanks, on behalf of America, for being the slam.

For more photos of your grandparents, check out the full archive here. You'll be glad you did.

And your grandparents will be like, "Told you so."

The owner of a donut store has been praised for defending a homeless man who hangs out outside of the store from an angry customer. The owner of Nomad Donuts, based in San Diego, defended the "intelligent and respectful" man after the customer implied that seeing him made them feel guilty about buying donuts.

The exchange was spotted by Reddit user beerbellybegone on Reddit, who shared screenshots on the social media site. The one-star review by the angry customer states: "A homeless guy has *lived* (morning noon and night) against the front entrance for about a year. Really makes me feel great about spending $5 on a jelly donut."

In a reply, owner Brad Keiller explained that the homeless man, Ray, was actually an asset to the store. He went on to explain Ray's background in a thought-provoking defense.

Keep Reading Show less
humanity
Get stories worth sharing delivered to your inbox
By signing up you agree to Upworthy's privacy policy.
Trending Stories
parenting
Family