21 things even a pessimist can be thankful for. 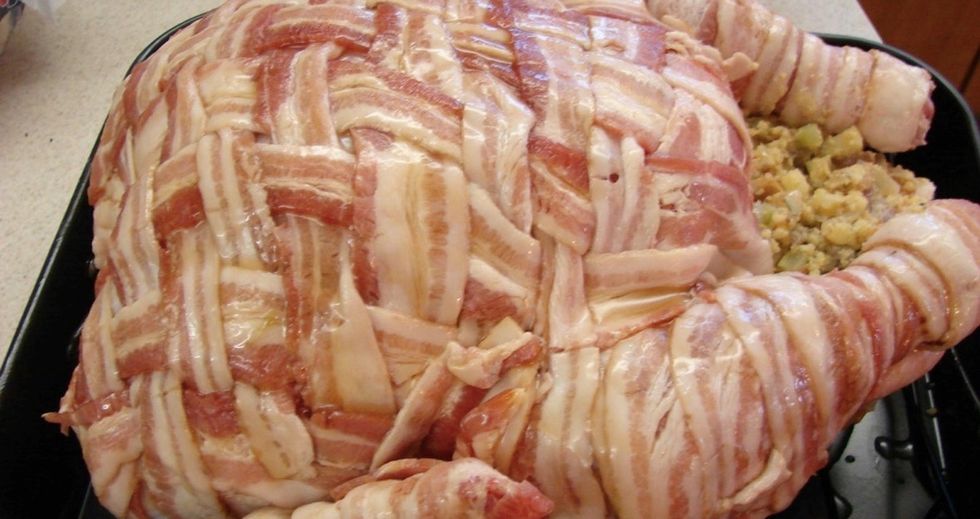 Thanksgiving must be really hard for pessimists.

It's the one day when we're all supposed to happily focus on the good things that exist in our lives and the world, but all you can think about is how it's not supposed to be this warm in November but "thanks, climate change," and the food that we're eating is covered in pesticides and preservatives, so we're all going to die from it, which is actually very fitting since that's what the Pilgrims brought to America anyway — disease and death — and speaking of death, are we really going to keep calling it the death tax, or are we finally going to get real about inequality once and for all, and...

And I get it. Those things are bad. No argument there.

But gratitude has proven positive emotional and psychological impact — and all the realist, half-glass-empty people deserve those benefits just as much as anyone else!

So here are 21 things from 2015 that even a pessimist can be grateful for.

Rainbow Brite would be proud. Photo by Mladen Antonov/Getty Images.

When marriage equality became the law of the land on June 26, the White House lit up in a rainbow to commemorate the occasion. The White House. Was a rainbow. That happened.

Huggable wasn't invented just to give us all the feels. He was made by MIT engineers this year to help children in cancer hospitals deal with the emotional and psychological trauma of battling the disease. But it's just one of many examples of how us humans continue to use science, creativity, and compassion to make people's lives better.

Everywhere you look, people are standing up and fighting back. From college campuses to multinational corporations, from protests and boycotts to marches and campaigns, it's clear that people are recognizing their power. And that means they haven't lost faith and still believe they really can change the world. "Oh, they're just naive," the pessimist in your head says. But not so fast. Their activism is actually working. See #1, #11, and #17 as proof.

4. A lot of Americans have finally stopped denying science.

According to a poll by the National Surveys on Energy and Environment, fewer people than ever are denying the existence of climate change. Or — to put it more glass-half-full — 70% of Americans believe that climate change is real, and that's more than ever before!

His name is Chris Ulmer. He's a Florida special education teacher, and a video of him complimenting his entire class, student by student, went viral last week.

But he's not the only amazing teacher out there. Not by a long shot. Despite all the horrible stories and statistics that exist about our education system, there are still thousands of passionate, smart, creative, and compassionate people working their butts off to make children's lives better every single day. They don't get a lot of attention, but they are out there. And those kids are probably going to grow into better adult humans because of them. So yeah. Thanks, teachers.

(OMG, the widdle paws and eyes and tongue and nose and ears!)

7. Social media is being used to connect people around the world to fight for justice and equality.

For all the selfies and silly trends that give social media a bad rap, it's undeniably been a game-changer for positive social change. Several items on this very list happened a lot sooner thanks to social media than they would have if sites like Facebook and Twitter didn't exist. It's easier now than ever for people to make their voices heard and actually have influence.

8. "America's Next Top Model" has finally been canceled.

Tyra Banks, smizing. An art form that she taught with passion on "ANTM." Photo via David Shankbone/Wikimedia Commons.

Sorry, I couldn't help myself. (On the off chance you actually liked the show responsible for giving a man a facial hair weave, you can be grateful for the 22 — TWENTY-TWO (!) — cycles you already had.)

9. STEM is finally starting to love (and respect!) the ladies.

There's undoubtedly still a ton of reasons why being a woman in a male-dominated field is hard, but here's something that should help: A study this April found that women are now favored for tenure-track positions in university science departments. They are twice as likely to be hired as an equally qualified man. Take that, patriarchy!

Remember when everyone said it was just a hashtag? Wrong. All across the country, young people are standing up to fight racism — winning tangible victories (University of Missouri, anyone?) and forcing presidential candidates to take note. They will not let racism go unchecked on their watch. And they're just getting started.

11. Barbie is stepping into the 21st century.

Actress Zendaya and the doll made to look like her and her famous dreadlocked hairstyle. Photo by Kevin Winter/Getty Images.

From introducing eight new skin colors to creating a doll with locs (above — isn't she pretty?) to inclduing a boy for the first time ever in their newest commericial, the still-popular iconic doll company is making sure that children across America might actually have play experiences that reflect real life. Now if they could only get over that unrealistic body shape and size. But I digress.

12. People are finding creative ways to do something about the refugee crisis.

It was hard to find something to be grateful for when looking at the current refugee crises around the world.

But then I stumbled on the story of the mom who is helping thousands of refugees by giving away free baby carriers to help getting children across the border and lightening the load. Or the organization that actually meets refugees at the water's edge to give them warm blankets and care for them as they get out of their boats. Remember that while the bigger picture may look terrible, you can always see goodness and kindness and love if you look a little closer. We just need the governments of the world to follow suit.

Sorry, just had to get meta real quick here. Life may not be perfect, it may not be exactly want you want it to be, and it may be downright unfair sometimes. But you being here right now means that you have another day to maybe help someone else, maybe get some help yourself, and at the very least have another opportunity to enjoy #15 on this list which brings me to...

Yeah, sure, there's a chance it could kill you, but odds are it probably won't. This holiday, don't just be grateful for this fatty, salty treat. Be grateful that the odds are forever in our favor.

On the off chance the bacon strips do make you sick, be grateful the Supreme Court upheld the ACA this year. Millions of people continue to have access to affordable health insurance.

16. Diversity in media. It's getting better. And better.

2015 has actually been a really good year when it comes to increased gender and racial diversity in media.

From Aziz Ansari's "Master of None" to Amy Schumer's hit, viral-clip-ready "Inside with Amy Schumer" to Viola Davis' and Regina King's Emmy wins to ABC's "Fresh Off the Boat," now is a good time to turn on the television and maybe, just maybe, see someone other than a white man as the lead. Nothing against white men, but it's about time.

People have been fighting the pipeline for years on the grounds that it would cause major harm to the environment. Looks like the environment — and those activists — won.

18. Diseases are being wiped off the face of the earth.

No matter how much pink we wear or how many concerts Bono holds, it's easy to think that deadly diseases like cancer and AIDS will never go away. But guess what? We are actually beating diseases that once killed millions of people.

Guinea worm (which I know you may have never heard of but was killing 3.5 million people a year in the mid-1980s) is now set to become the second human disease in history, after smallpox, to be eradicated. Only 15 cases were reported in the first eight months of this year. Almost gone! And if that doesn't move you, poliovirus type 2 was completely eradicated this year as well.

19. Some young celebs totally get it. "It" being equality.

Move over, Raven-Symoné. There's a new crop of young female celebs, and they're using their voice and their platforms to tackle inequality head on. From Amandla Stenberg and Zendaya to Ariana Grande and Emma Watson, 2015 saw the rise of the conscious young female celeb. They talked about race, diversity, gender inequality, feminism, and well — that's a good sign for the future, right?

What? Everyone in the world isn't getting poorer? That's right. Even though the wealth gap is growing and far too many people still don't have what they need to survive, the data actually says we're doing a bit better than before.

The World Bank announced that they project less than 10% of the world's population will be living in extreme poverty by the end of this year for the first time. If nothing else, that's proof that we could maybe actually eradicate extreme poverty one day. We're making progress.

Whether it's the romantic kind or the family kind or the friend kind or the I-don't-know-you-but-let-me-help-you kind or the severely-underrated-but-really-incredible self kind, love in all its forms is pretty amazing.

If you think things in the world are bad now, Debbie Downer, imagine how they would be without any love at all.

Now go enjoy some turkey or some ham and add a small plate of thankfulness to your gigantic mug of haterade this year. It will feel good, and it's good for you.

P.S. To practice feeling good right away, go ahead and give the video of teacher Chris Ulmer and his students (from #3 above) a watch. I dare you not to smile.