199 labs turned him down. This teen made a groundbreaking discovery at the 200th. 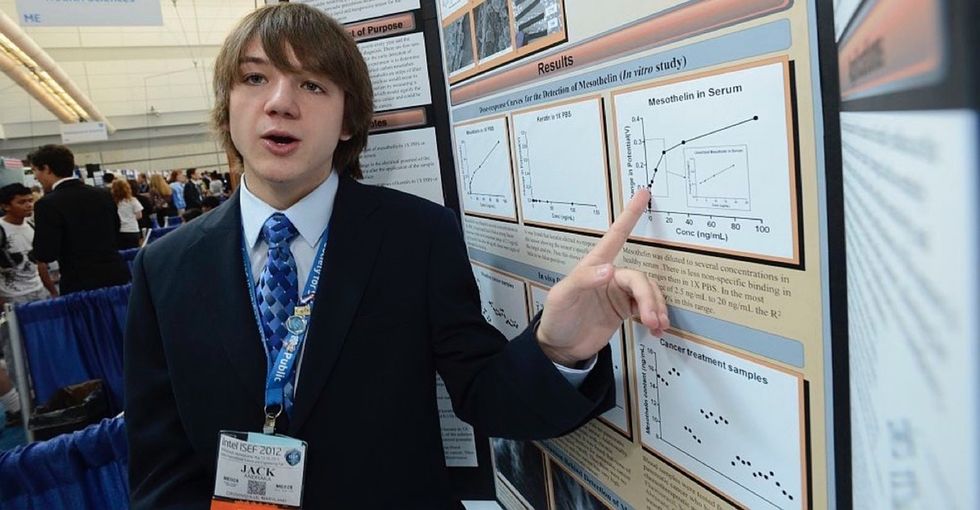 This is Jack Andraka. And trust me, you're going to want to remember that name.

Check out this short video on Jack's unbelievable scientific breakthrough, and then scroll down to see how this teenage whiz kid made it happen.

Jack's beef with pancreatic cancer is a personal one.

At 14, he lost a close family friend to the ruthless and aggressive disease. The pancreas sits deep inside the body and is difficult to scan. There's no hallmark symptom or lump to alert people to the growing danger.

The pancreas (enlarged in red) is nestled right in your abdomen near your liver, stomach, and gallbladder. Image by iStock.

But Jack turned his grief into action and set about developing a reliable test for pancreatic cancer.

Jack's test for pancreatic cancer is based on a few important but seemingly unrelated ideas. Hold on tight, because it's about to get real science-y in here.

1. Carbon nanotubes are smaller than small — about 1/50,000th the diameter of a human hair. But you can use these microscopic tubes to make tiny networks that conduct electricity.

2. Antibodies like to attach to different proteins in the blood.

3. Mesothelin is one of the biomarkers of pancreatic cancer. It's a protein that the body produces when the cancer is in its early stage.

While Jack was sitting in class one day, it all came together.

As he surreptitiously read an article about carbon nanotubes during class, his biology teacher was giving a lecture on antibodies.

That's when it hit him.

Jack had the brilliant idea to coat a carbon nanotube network with mesothelin. The antibodies would bind to it and get bigger.

As the molecules enlarged, the nanotubes would expand too, changing the network's electrical properties. That change in electricity is quick, easy, and affordable to measure. Eureka!

While Jack had a great working theory, he needed a way to test his hypothesis.

He went home and wrote up his budget, procedure, materials, and timeline, then sent it to 200 cancer research labs, asking for their help. 199 said no.

But one, Dr. Anirban Maitra, then a professor of oncology at Johns Hopkins University and now the chief pancreatic cancer researcher at the University of Texas MD Anderson Cancer Center in Houston, said yes.

With Dr. Maitra's good news, Jack likely did something like this. Photo by iStock.

"It was a very unusual e-mail,” Maitra told Smithsonian Magazine. “I often don’t get e-mails like this from postdoctoral fellows, let alone high-school freshmen.”

Dr. Maitra let him come into the lab at Johns Hopkins to work on his project.

Maitra's yes didn't just come with lab access; it came with the assistance of Maitra's team of Ph.D. researchers, just the kind of team Jack needed to get the job done.

Jack went in after school and on weekends to work on his research. After seven months of preliminary tests and refinements, it started to work.

For his research, Jack has received international recognition and numerous accolades.

Since taking home the 2012 Gordon E. Moore Award, the top prize at the Intel International Science and Engineering Fair, Jack has earned awards and honors from organizations around the globe.

Notably, he received the 2012 Smithsonian American Ingenuity Award, named a Champion of Change by the White House, and received a fellowship as a National Geographic Explorer. And Jack (who came out as gay while still in high school), even earned a spot on Advocate's "40 Under 40" list.

Though Jack's test is promising, it's far from a silver bullet.

His work is extremely preliminary and has yet to be published in a peer-reviewed journal — the industry standard for measuring the merit and veracity of scientific research. Additionally, scientists who have read Andraka's work suggest a need for further research about the speed and price of his test.

Success is within reach but not guaranteed just yet. Photo by iStock.

However, Jack holds a patent on his test and is licensing it to pharmaceutical companies so they can run the often-monotonous clinical trials, a necessary step to ensure patient safety and accurate diagnoses.

"I don't wanna ... end up as a lab rat," Jack said in an interview with "60 Minutes." "I kind of want to be able to come up with a new idea and then really just move on to the next idea, and have other people do the repetitive trials."

In the meantime, Jack, who just turned 19, is keeping busy.

He's a first-year student at Stanford University, gives talks and lectures all over the world, and even co-wrote a memoir, "Breakthrough", about his experience.

And when he's not in the lab, studying for finals, advocating for LGBT youth in STEM careers, or championing pancreatic cancer research, you might find him in his whitewater kayak or catching up with friends and colleagues on social media. You know, typical teenage whiz-kid author/scientist stuff.

He may not fight crime or have special powers, but when it comes to helping others, Jack Andraka has all the makings of a hero.