#YouDo: Why I decided to spend November thanking the women who've inspired me. 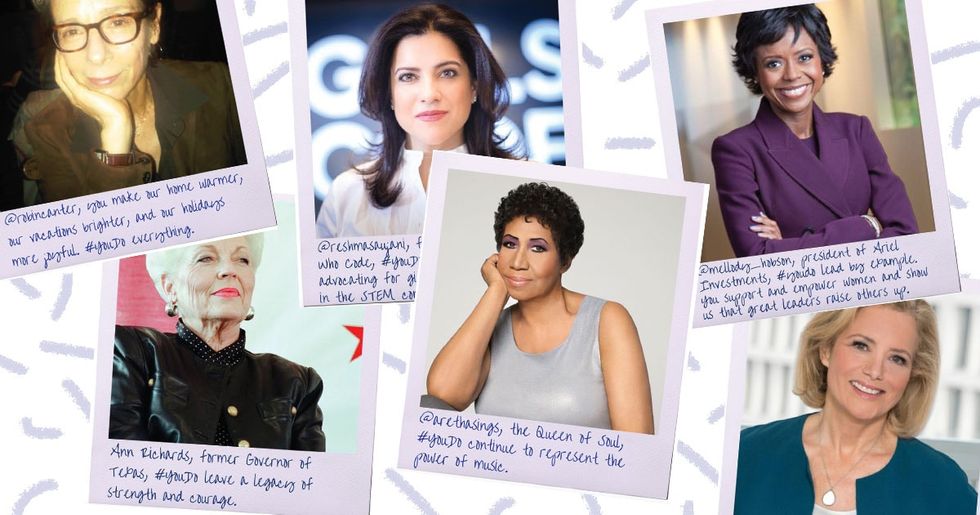 When the #MeToo movement broke just over a year ago, I was gutted.

It was startling to see men I’d admired revealed as predators and heartbreaking to learn of so many women who had suffered unwanted sexual advances and endured harassment in the workplace. I knew how important it was to shine a light on these atrocious acts.

To borrow a phrase, time was up. Kudos to those who stood up and spoke out.

A year on, with stories still unfolding, I decided to test an idea — examine another way to look at the world.

Rather than think about what some men had done to women, I decided to focus on what women have done for themselves, and more specifically, how they have helped me.

So, for the month of November, I committed to a daily posting under the hashtag #YouDo. I’ve honored women who shined a beacon of goodness, challenged a status quo, inspired us and led by example.

My first honoree was Susan Desmond-Hellmann whom I know through her previous work in biopharmaceutical research and now as CEO of the Bill and Melinda Gates Foundation. I applauded Sue for her commitment to eradicating disease around the world.

Later in the month, I saluted the poet Mary Oliver. I’ve never met Mary, however, I hear her words every morning as I read one of her poems to remind me of nature’s power to heal and inspire.

The day after the mid-term elections I congratulated Rhode Island’s Governor Gina Raimondo on her reelection. Governor Raimondo is a pragmatic solution seeker, a strong and caring elected official and someone I truly admire.

Every day for the month, I posted a woman’s image with the hashtag #YouDo and referenced her specific acts.

There was no celebrity spokesperson. No advertising support. No public relations blitz. Just a lot of heart and homespun gratefulness.

The results surprised me. Compared to the previous month, viewership of my LinkedIn profile increased by nearly 350% and I gained more than 1,000 new followers. It was a thrill for me to see Billie Jean King and other women I admire engage with #YouDo.

The effect on my mindset was even greater. My anger and discouragement have tempered. More importantly, I feel a connection to a community at a time when people feel more at odds than ever. In a world where insults dominate, I found the power of gratitude.

I encourage you to try it. Give kindness a go. Whether under #YouDo, or in your own creative voice, express your thankfulness. #YouDo feel better when you shed a positive light on others.

Sally Susman is the Executive Vice President and Chief Corporate Affairs Officer at Pfizer where she leads reputation management and directs the company’s communications, public affairs and philanthropic activities around the world. Her work takes her from the offices of Pfizer to remote villages in Africa to the corridors of Capitol Hill, and she is motivated by the many different hats she wears – business leader, engaged citizen, and influencer. Sally can be found on LinkedIn and Instagram.

Editor's Note: GOOD Media Group is a paid consultant of Pfizer. This op-ed was produced independent of that partnership.

Keep Reading Show less
science
Get stories worth sharing delivered to your inbox
By signing up you agree to Upworthy's privacy policy.
Trending Stories
women
popular