Yep, Chrissy Teigen is still being as real as it gets after giving birth again. 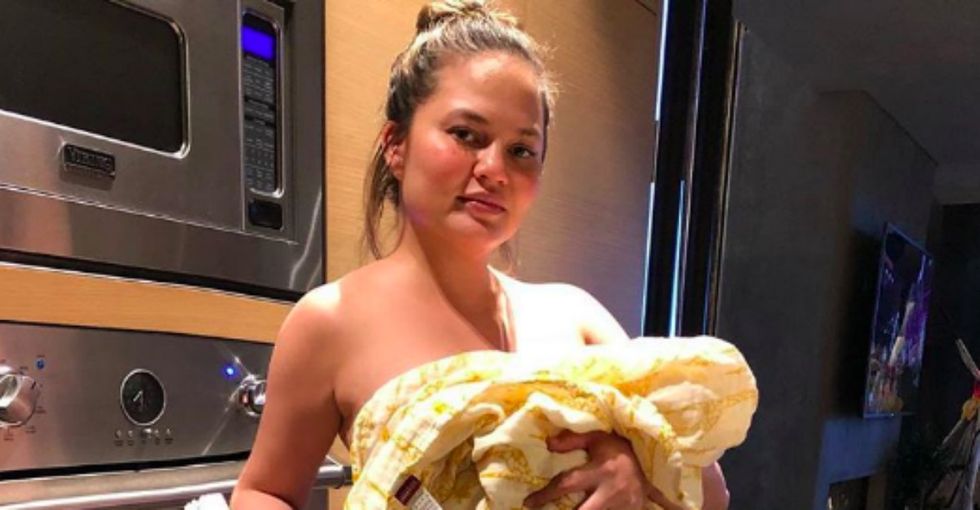 "This is Miles Theodore Stephens," Teigen captioned a photo posted on May 17, 2018. "We are drowning in his little peeps and nuzzles. Our household feels overwhelmed with love."

Don't let the adorable pic and delightful caption above fool you though: Teigen's still being as real as it gets when it comes to postpartum life.

Hours after Miles' Instagram debut, she posted a slightly less magical shot sporting post-birth underwear, giving a shout-out to comedian Ali Wong for cleverly pointing out the clothing item looks just like the material Korean pears are wrapped in at the grocery store.

On May 20, Teigen threw a (lighthearted) dig at Legend for attending an awards show while she was at home fulfilling her less glamorous mommy duties.

"Wow," she wrote from the couch, wrapped in a blanket with Miles in her arms. "Didn’t u just have a baby John [shake my head] go take care of it !!!!!! disgusting"

Then there was this tweet — an incredibly honest revelation about the birthing process. "I can confirm postpartum life is 90% better when you don't rip to your butthole," she confirmed.

(The replies to that one were particularly amazing. "My baby boy will be 25 in August and my butt still hurts," one follower chimed in.)

None of this should be surprising. Teigen's been dropping mommy candor since giving birth to her now 2-year-old, Luna.

Luna — like every little one — has had her rascal moments. And Teigen's been happy to share many of them with fans.

Because many parents have been there, done that.

But Teigen's relatable mom life has gone beyond the jokes and lighthearted digs at daddy. She's opened up about the more serious sides of parenthood as well.

Last year, Teigen penned a powerful essay in Glamour about her struggles with postpartum depression.

"How can I feel this way when everything is so great?" she wrote.

"When I wasn’t in the studio, I never left the house. I mean, never. Not even a tiptoe outside. I’d ask people who came inside why they were wet. Was it raining? How would I know — I had every shade closed. Most days were spent on the exact same spot on the couch and rarely would I muster up the energy to make it upstairs for bed. John would sleep on the couch with me, sometimes four nights in a row. I started keeping robes and comfy clothes in the pantry so I wouldn’t have to go upstairs when John went to work. There was a lot of spontaneous crying."

After being diagnosed with postpartum depression and anxiety, Teigen began taking an anti-depressant and opening up to family and friends about what she was going through.

"I remember being so exhausted but happy to know that we could finally get on the path of getting better," she wrote. "John had that same excitement."

Sure, many aspects of Teigen's life aren't ordinary or relatable. She's wealthy and a famous model, cookbook author, and TV personality. Her (well-deserved) career has afforded her many luxuries most of us will never benefit from. But that's why her parenting candor — both the funny anecdotes and her more sobering revelations — are all the more important.

If a star like Teigen's going through it, you know you're not alone.