Will you swear with Gillian Anderson to help support mental health in young people?

Now's the time to swear your support for mental health. 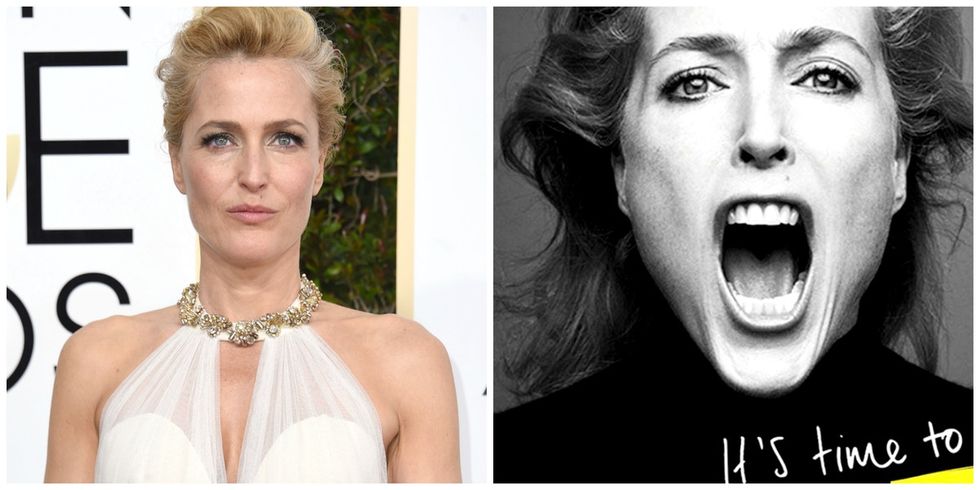 Before she was chasing aliens on "The X-Files" and fighting for equal pay in Hollywood, Gillian Anderson was a self-described "confident f*ck-up."

She was 11 when her family moved from London to Grand Rapids, Michigan — a move that left her feeling lost and alone. As a result, she rebelled as teenager: She acted out, did drugs, and got into all kinds of trouble.

When she went into therapy, however, everything changed. "[Therapy] started a different path for me, and all the energy I was putting into self-destruction and ‘poor me, and nobody understands me’, I started to funnel into what I was going to do with my life," she told The Guardian.

Today, Anderson is a successful actress, writer, producer, and director who believes it's vital to start tackling mental illness and mental health at a young age.

That's why she's pledged her support to MQ — a nonprofit organization working to improve mental health awareness and treatment for young people.

1 out of every 4 to 5 young people meet the criteria for a mental health disorder that will affect them their entire lives. 8.1% of young people ages 12 to 17 will have at least one depressive episode, and 13.8% ages 10 to 24 will seriously consider suicide.

Despite these statistics, mental heath research has remained underfunded and under-prioritized. MQ is determined to do something about that.

MQ's mission is "to create a world where mental illness is understood, effectively treated, and ultimately prevented." The first step on that path is awareness.

And what better way to raise awareness than a bunch of celebrities swearing their support by actually, literally swearing it?

It may be a bit vulgar, but it got your attention, didn't it?

While it's great that more and more celebrities are opening up about their own experiences with mental illness and mental health treatment, celebrity stories like Gillian Anderson's are the tip of the iceberg.

MQ also shares the stories of everyday people to show just how difficult getting mental health treatment can be — and how dramatically people's lives improve with the right treatment. In this Facebook post, Kirsty shares her story of enduring 10 years of experimental treatment before doctors realized she was bipolar and put her on an effective treatment plan. It's a story that is all too common.

Kirsty started self-harming when she was just 11 years old. She tells us her personal story of mental illness and why research brings her hope: http://bit.ly/KirstyStoryMQ

With the Affordable Care Act on the line, there could not be a more pressing time to fight for mental health support, services, and care. Find out more about MQ's work and take the pledge yourself here.