Why guidelines regulating legal cannabis businesses may be doing more harm than good. 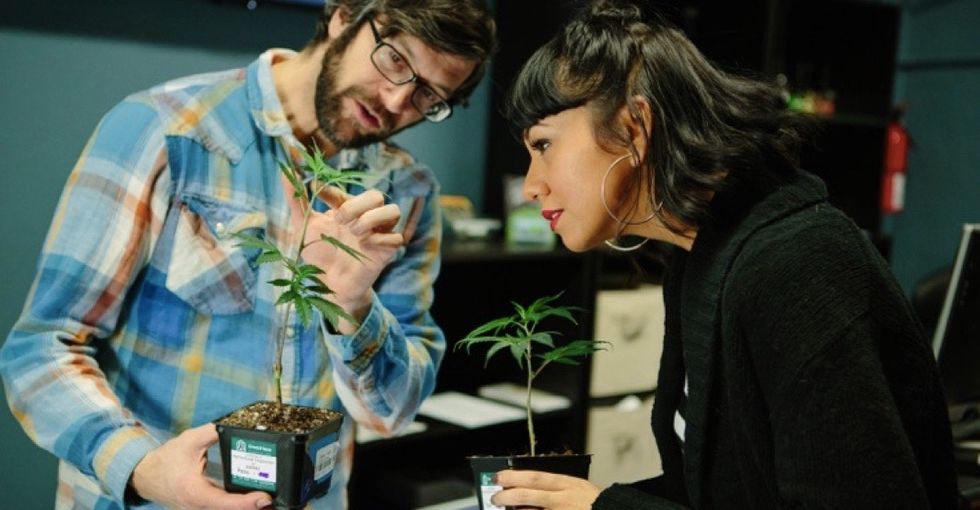 Matt Walstatter fell into the cannabis business like many people do; he got sick. Really sick.

In 2003, a bad case of flu and pneumonia turned into painful gastrointestinal symptoms that wouldn't go away. For 10 years he vomited every day. He lost 50 pounds in the first six months.

After trying everything and seeing multiple doctors, acupuncturists, and naturopaths, cannabis was the only thing that provided relief. He applied for the Oregon Medical Marijuana Program to grow cannabis for himself and soon started growing for others. For nearly three years, he's run Pure Green dispensary in Portland, Oregon.

As much as he enjoys his new career, it's not without challenges.

"I liken operating a cannabis business to running with ankle weights," Walstatter says, "because everything is a little harder."

Medical and recreational marijuana are legal in Oregon but not at the federal level, putting businesses like Walstatter's at odds with the government and the financial industry.

Cannabis-related businesses operate in a challenging limbo, able to grow, produce, and sell products but bound by piecemeal rules and regulations. Since marijuana is still an illegal Schedule I substance at the federal level (grouped together with the likes of heroin, LSD, and ecstasy), providing banking services for these entrepreneurs violates multiple federal statutes and laws including the Controlled Substance Act, the Bank Secrecy Act, and even the Patriot Act.

This means cannabis businesses often have to operate without routine banking services like checking accounts, payroll assistance, or credit cards and instead work entirely in cash.

"The biggest hassle is paying bills. Instead of just writing a check and being done with it, you have to walk and drive somewhere," Walstatter says. "Money moves from place to place, but most of the time it happens electronically. But when you don’t have a bank account, if you want money to get from point A to point B, you’ve gotta bring it there yourself.”

But it's more than an issue of inconvenience, it's a matter of feeling safe.

"You’re always at risk," says Sally Alworth, co-owner of Luminous Botanicals, a Portland-based company that makes natural medicinal cannabis serums. "Anybody who looks around and sees where you’re located and that you’re a cannabis business knows that you likely have a stockpile of cash on site, and even if it’s in a safe, it just feels like you’re a target. There’s a big bull's-eye on you."

And while dispensary robberies are rare, they do occur. In Portland last August, a dispensary owner was robbed, bound, and held at gunpoint in his own store. It's enough to keep proprietors on edge.

Though zoning varies from state to state and region to region, cannabis businesses and dispensaries are located in every corner of Portland, with 100 licensed medical dispensaries in the county alone. No one is immune to the potential criminality.

Traditional banking is happening in the industry, if you know where to look.

Two years ago, the Financial Crimes Enforcement Network (FinCEN) part of the Department of the Treasury, gave banks permission to work with cannabis businesses and professionals as long as certain guidelines and provisions were met. Most national banks (think Chase or Wells Fargo) are chartered, regulated, and insured at the federal level. But smaller, local banks and credit unions are chartered at the state level and answer to state and federal regulators.

Different strains of marijuana for sale on a digital board at a dispensary in Eugene, Oregon. Photo by Andrew Caballero-Reynolds/AFP/Getty Images.

Since the legality of cannabis is still a state-to-state issue, some community banks are willing to take the risk, follow FinCEN guidance, and offer accounts to marijuana-related businesses or, as they're called in the financial industry, MRBs.

Walstatter works with a community bank to manage his funds but declined to share which one. "They actually make most clients sign an NDA for some reason," he says, likely out of fear of drawing unwanted attention from regulators.

But not every financial institution is so secretive about its forays into the industry.

"We saw it as a really good opportunity and the way to advance the medical research behind cannabis. We do think it has some medicinal benefits, but unfortunately the testing has been limited due to its federal illegalities," says Carmella Murphy Houston, vice president of business services for Washington-based Salal Credit Union.

Salal works with more than 300 MRBs in Washington and Oregon, most of them larger producers, processors, and retail businesses.

Per FinCEN guidelines, financial institutions that elect to work with MRBs have to vet and monitor the businesses closely to ensure none of the money is going toward criminal enterprises.

"We have monthly, quarterly, and annual ongoing monitoring that we do on the businesses as well," Houston says. The hefty monthly fees for the MRB accounts help offset the cost of this additional due diligence.

While some banks are willing to take the chance, it's simply not enough to manage the needs of a nearly $7 billion industry.

Less than 3% of the country's 11,954 federally regulated banks and credit unions service the cannabis industry, a total of 301 in 2016.

Seven additional states legalized medical or recreational marijuana during the last election, bringing the total up to 28. This is quickly becoming an issue of national concern, and it's finally getting some attention in Washington, D.C.

The first week of January, Sen. Elizabeth Warren of Massachusetts led a cadre of senators to push FinCEN to issue additional guidance to banks wishing to work with MRBs.

"You make sure that people are really paying their taxes. You know that the money is not being diverted to some kind of criminal enterprise," Warren said recently, The Associated Press reported. "And it’s just a plain old safety issue. You don’t want people walking in with guns and masks and saying, 'Give me all your cash.'"

Those in the cannabis business say these changes can't come soon enough.

For retailers and producers like Walstatter and Alworth, the uncertainty and challenges of the business are worth it to provide a product they believe in. A fix would mean big changes for their businesses and might allow them to focus on other challenging regulations like the tax code, which doesn't allow cannabis businesses to deduct typical business expenses like marketing or administrative costs.

"We’re transitioning from the black and grey markets, so there’s just obstacles and bumps that most businesses don’t encounter," Walstatter says. "Sure, you have to pay taxes like everybody else, but you don’t get to deduct anything. You wanna pay bills, you probably don’t have a bank account. We’re in the hyper-regulated environment, and about two or three times a year, the rules just change in a way that often turns our business model upside down."

Rules may change. Policies may shift. And with the new administration, the way legal marijuana (medical or otherwise) exists in this country may change dramatically. But Walstatter's been through worse. And he's not giving up now.

A man shops at Farma, a marijuana dispensary, in Portland, Oregon. Photo by Josh Edelson/AFP/Getty Images.