What a hopeful first-generation immigrant wants you to remember on Election Day.

We have the choice to determine what tomorrow will look like. Let's not get it wrong. 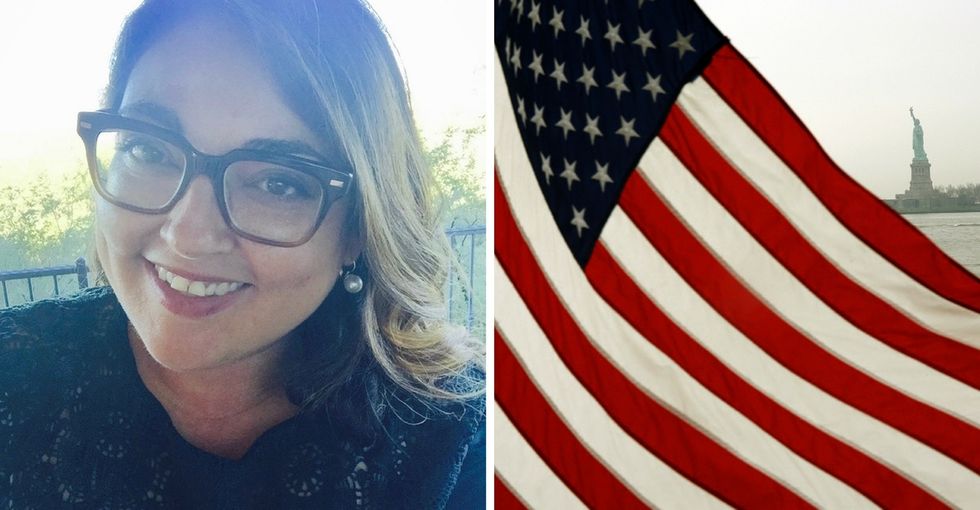 When I was a first-generation immigrant kid in the late-1980s, Ronald Reagan was president.

It was a big deal. I didn't even know whether he was Republican or Democrat, but I knew he was a good man. People liked him. He had my family and my community's respect. I also knew he had been an actor, but that wasn't what defined him or his presidency.

When I was a kid, I could walk to and from Arizona to Mexico without too much of a fuss.

Because I'm the only U.S. citizen in my immediate family (born in Tucson, Arizona), I always felt a special sense of pride in being able to say "U.S. citizen" before the customs agent waved me across.

When I was kid, I wasn't scared the government would deport my parents.

Maybe it's because I knew my parents and my older brother and sister had permanent residence cards. They became U.S. citizens about 10 years ago, once I was grown up, but still, I never even worried about the words "resident alien" on my family's passport cards when I was younger.

When I was a kid, I wasn’t aware of the fact that I was an “other.”

When I turned on the television, I never saw families that looked like mine, but I was oblivious that I wasn't represented in Hollywood. As long as I enjoyed the actors and the storyline in any given TV show or movie, life was grand. Representation wasn't an issue because I was unaware I was a minority. No one treated me differently. I thought everyone was just like me, Mexican-American — made up of two cultures.

When I was a kid, it really did feel like you could accomplish anything with hard work. It was "Morning in America."

My family was considered middle-to-upper class. It felt like we had a fighting chance in the land of opportunity. My father was the owner of a successful auto parts wholesale warehouse. He also owned at least a dozen rental properties on both sides of the border that kept us living comfortably. It felt like that sense of financial security would last forever. The devastating devaluation of the peso wasn't an issue ... yet.

My family and I posing at one of my dad's business locales in Mexico in the late-1980s.

When I was a kid, I knew that people were engaged in the political process, but they didn’t live and breathe it like some do today.

I remember picking up snippets of news here and there, hearing about politics from my parents, neighbors, maybe teachers at school. But there was no constant barrage of information. I knew who my parents were endorsing in election years. I also knew who was running in the Mexican presidential election. But that news was delivered either via newspaper or the TV news, promptly at 5 or 10 p.m. That was it.

When I was a kid, I felt that if I got a good grades, everything else would just fall into place.

My parents didn’t have to worry about how to pay for my tuition. I felt secure that the opportunity to attend college was readily available if I worked hard and earned the grades to get in. I knew it was up to me how far I wanted to get in school too. The idea of "how are my parents going to pay for this?" was never a factor when I was accepted into grad school. The fact that I don't have student debt is a blessing.

Now, I’m an adult. I live in Phoenix, Arizona. And I see things with a lot more clarity and cautious optimism.

Today, I'm worried about my nieces and nephews and their children, and about first-generation immigrant kids everywhere.

I want them to have what I had growing up. I want them to live without fear of being discriminated against, without the financial burden of taking out high-interest loans to pay for college. I want them to know that, in spite of the constant downpour of any salacious or unnecessary details related to the 2016 presidential election, the process matters.

Today, I have no idea what the border checkpoints would look like under a Trump presidency, let alone his plan to build a giant 10-foot-tall wall.

Part of the proposed structure would be built right smack in my hometown. It would send a divisive message of "us versus Mexico" — literally and figuratively.

Today, many kids are scared to death that their parents will be deported back to their country of origin.

Kids today are more aware about social issues (like illegal immigration) than I was as a child in the late-1980s, and a presidential candidate publicly calling Mexicans "rapists" and "criminals" is part of that. Some kids saw that and they are well aware of how that candidate feels. There were no minced words. They worry that they don't belong.

Today, many minority kids are more likely to feel like they are a minority.

The racial divide has never been more apparent.

Today, for many folks, America can feel more like the land of little-to-no-opportunity.

If Trump wins, it feels like another win for “the man,” for the top 1% — with nothing to offer lower- and middle-class families. I worry that the opportunity to get ahead will not be the same for everyone across the board. I worry that the children of my family and friends won't be able to fight for their dreams. I fear that Trump's anti-immigrant rhetoric will further rub off on society.

We no longer have to wait for the daily newspaper or the evening news to hear the highlights. We’re infiltrated with every single news tidbit throughout the day via social media and constant TV coverage. It's exhausting. It’s difficult. It's almost impossible to have an objective opinion about the world (much less politics) because of the filter bubble.

Sometimes, I fear that we are all over-informed and that we're not talking about the issues that affect our everyday lives, like LGBTQ rights or who will be appointed to the Supreme Court.

Today, I worry about how the heck kids are paying for college.

Today, even if you have stellar grades, you worry about how to pay for your education. Today, if I wanted an education, I would be one of millions taking out a student loan. The last thing I want is for my nieces and nephews to graduate with a mountain of debt I never had to endure.

But despite all of this, today, I am still hopeful we can make progress.

What I had and saw as a child in America can still exist, in some sense. And the choice to make progress is ours to make.

As a first-generation immigrant, I'm incredibly proud to be an American.

I was given opportunities to succeed. I am where I am today because of America.

That's why it's super important to me, and to other people who know how great America is, that we all cast our vote for the kind of America that doesn't build walls or function on fear. On Nov. 8, let's not waste this choice that we have.

There's way too much at stake.