This ragtag group of arty inventors have made a $9 computer. It's kind of a big deal. Here's why.

We talked with one of the inventors. Minds exploded. 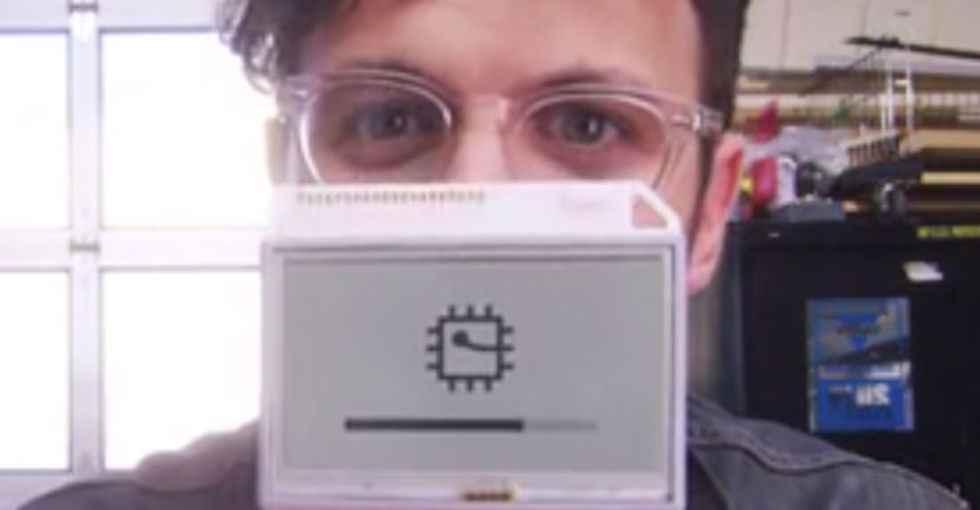 Can a $9 computer help humankind?

But to figure out just how CHIP, the $9 computer, came about and what it means, I hunted down one of the makers, Dave Rauchwerk.

There are tons of smart inventors in the world. But for a long time, there just wasn't an inexpensive way for them to develop products with computing power. That privilege was left in the hands of mythical Steve Jobs-like characters and big, unapproachable computer chip companies.

That's me, learning about CHIP on a Skype call with Dave.

1. The very creation of CHIP demystifies how cool electronics are made.

If you're anything like me, computers might as well be made on Mars ... that's how impossible the process seems. But the CHIP team didn't have to go to Mars to make CHIP. The CHIP team got some really cool help from a program called the Hackcelerator.

Hackcelerator is a program that gives money to people with cool ideas for computer hardware and sends 'em to China, the world's manufacturing HQ, to make the right connections that will make cool ideas turn into REAL THINGS.

That's right. We don't have to wait for some genius Steve Jobs-like person to come up with idea. I, you, we, all of us — we can follow this model for inventing things ... and invent things. Real things!

2. CHIP redefines what computers even ARE!

"When everyone can have a computer ... that doesn't look like 'a computer' anymore, that means that the people who grow up with things like this aren't going to have the same bias about what a computer is and what it isn't as they have now."
— Dave Rauchwerk, co-maker of CHIP

Sure. CHIP does computer things.

But because of CHIP, we can turn almost anything into a computer.

Anything that COULD have a computer brain in it now CAN — and cheaply! If you have the idea and you can program, you can make the thing. No huge costs keeping you from doing it. No difficult hardware to order or construct.

Did we mention that CHIP also teaches you how to code? It does. It comes preloaded with Scratch, an easy-to-learn language that teaches the basics of programing by making stories, games, and animations.

3. CHIP is so cheap, it makes computing a right for everyone, not just a privilege for some.


That's me on the lower right, at the moment my mind kinda exploded.

Turning an old TV into a computer monitor is nothing new. But what is new is how easy and affordable it is with the advent of CHIP. You used to need money, connections, power, or genius to get your hands on a computer. But with CHIP, you can turn an old TV and a mouse and a keyboard you found in the trash into a computer. BAM!

Computers — and the opportunities that come with them — aren't just for the powerful anymore. They're for everyone.

It's radical. It's the future.

Computing rights for everyone? The power to invent new things? A whole new world?

CHIP is your density.

Go get a CHIP on Kickstarter while you still can!

Or you can just lean back and imagine all the cool inventions that are about to happen once other teams of ragtag artists get their hands on CHIP ... oh the possibilities!