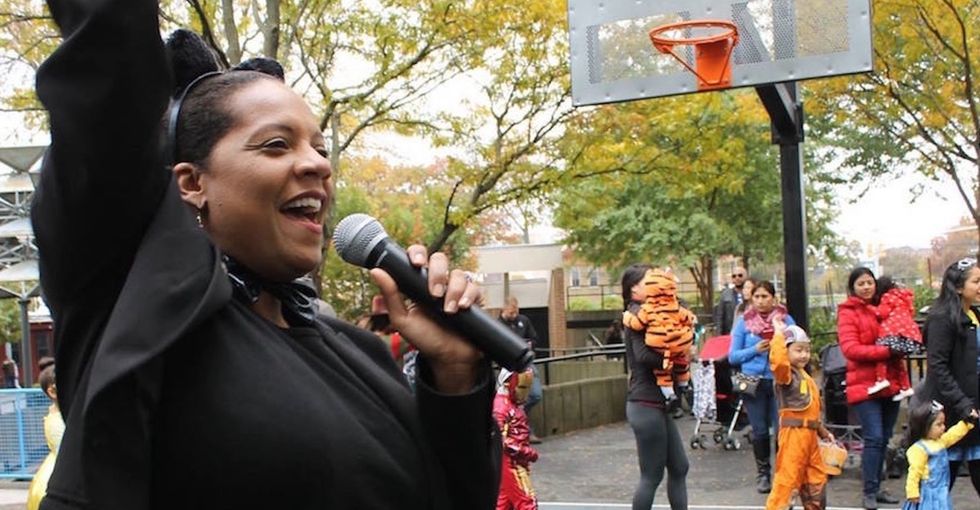 Unless you're a character in a Judy Blume novel, getting your period is rarely an event met with elation.

Most people who menstruate take it in stride. It's a normal bodily function, and it's usually manageable, especially if you have access to the period products you need (tampons, pads, menstrual cups, ibuprofen ... the occasional heating pad and chocolate bar).

But for many women, that access isn't a given.

Women who get their periods while homeless, in jail or prison, or at school often don't have access to tampons or pads when they need them.

And even folks who can stop by the store and pick up a box of tampons on the regular pay a "luxury tax" tacked onto their purchase in most states. That can really add up — especially if you're living paycheck to paycheck.

Here's the good news: New York City Council members are teaming up to fight back against this tax and lack of access in some awesome ways.

Ferreras-Copeland in action, via her Facebook page, used with permission.

According to The Atlantic, Ferreras-Copeland got involved after she read an op-ed about the tampon tax in The New York Times and decided to talk to the author, Jennifer Weiss-Wolf from the Brennan Center for Justice.

"After meeting with Jennifer Weiss-Wolf, who shared with me what she had written about the tax, I thought, 'OK, what can I do from a municipal level?'" Ferreras-Copeland told Upworthy.

Their conversation prompted Ferreras-Copeland to hold a roundtable in June, where she heard from advocates for homeless, incarcerated, and low-income women and girls.

“I couldn’t believe I could just go to a lawmaker with an idea and have her listen and do something about it,” Weiss-Wolf told The Atlantic. “That should be how government works.

Based on this, Ferreras-Copeland has a few big plans for the women of New York.

1. She launched a hugely successful initiative that put free tampons and pads in every girls bathroom in a Queens high school, and she wants to take it citywide.

We put toilet paper in bathrooms for free. Why not tampons? Image from Wikimedia Commons.

"Many [female students] found themselves cutting class or leaving school [after getting their period], where young men don't even have to think about this as a challenge in their school day," Ferreras-Copeland said.

Her pilot program provided pads and tampons to the school, keeping the school's bathrooms well stocked, for free. "[The pilot program] was so well received. The parents also very much supported it. The young girls thought, 'Wow, this is such a simple solution.' They could just be normal students— focused on their midterms, focused on their finals," she said.

2. She's drafting a package of legislation about period product access.

"There are many women out there that are struggling," Ferreras-Copeland said. "They have to decide between putting food on the table and being healthy and keeping their bodies healthy."

3. She's also planning to introduce a resolution that calls on the New York state assembly to get rid of the luxury tax on pads and tampons altogether.

Thankfully, New York City isn't the only place where tampons and pads may soon become more accessible. Several other states, including California and Ohio, are considering eliminating taxes on feminine hygiene products, too. The New York Times is even calling for an end to the tampon tax altogether.

What can we all do personally? Keep talking about periods and why everyone deserves to experience them with dignity. Change happens when people choose to ignore stigma and speak out.

Politics has always been a mixed bag of genuine discussions about governance, inane partisan bickering, and ongoing struggles for power. As much as I wish we could engage in the first more often, it feels like politics in America has become far more of the latter.

Within those partisan power struggles, the language of politics gets skewed and molded to fit specific purposes. Sometimes, phrases are used as dog whistles calling on people's prejudices. Far too often, the manipulation of words and their meanings—political rhetoric—renders certain terms meaningless as they get tossed around without nuance or context. Ultimately, the repeated use of certain terminology ends up destroying discourse instead of adding to it.

This is by no means an exhaustive list, but here are 10 terms I'd love to see us flush from American political discussions:

There's no excuse for anyone ever using this term. To call certain people "real Americans" implies some kind of defining characteristic that some Americans have and some don't, which is the complete opposite of the country's diverse reality. And who would get to determine that definition, anyway? Do we go by majority? A full 82% of Americans live in urban areas. Does that mean city people are "real Americans" and the rural minority are not? Obviously, that's ludicrous—just as ludicrous as the idea that Americans in diners talking about the Bible are "real Americans." There's simply no such thing.

When your party and its leader are plagued by accusations that they support white supremacists, it's probably best to avoid staging large events with symbols reminiscent of those used by the Third Reich.

The Republican Party failed to do that at the Conservative Political Action Conference (CPAC) last weekend. Instead, the main stage at the event was in the shape of the othala rune, a symbol used interchangeably with the swastika in Nazi Germany.

The conference was held at the Hyatt Regency in Orlando, Florida.