This gay Egyptian woman had a homophobic dad. But he went through a 'miraculous' change.

"It's hard when you are young. And it stays hard, but it gets easier." 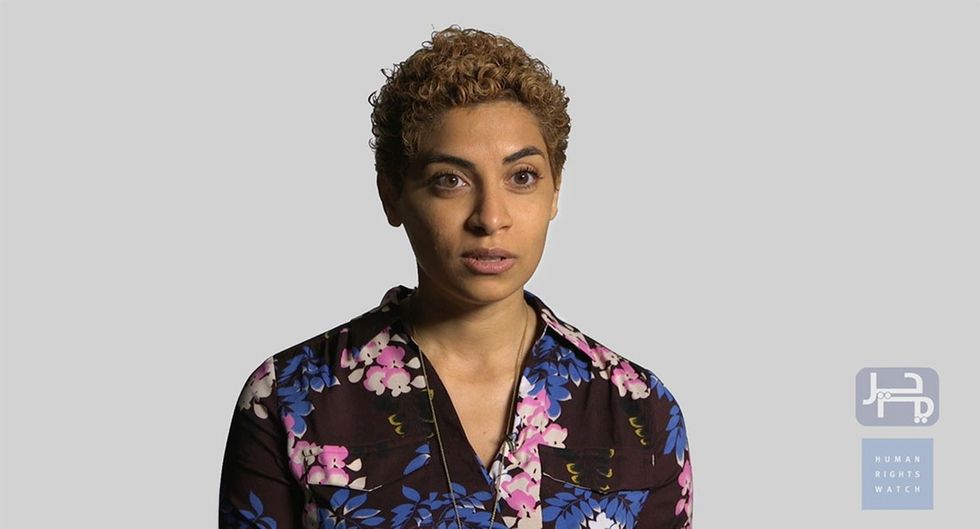 For many living in the Middle East and North Africa, being openly LGBTQ is one of the bravest things one can do.

And some incredible queer people in the region are doing just that.

Dalia, a gay Egyptian woman, was one of the activists who shared her remarkable journey of acceptance, growth, and, ultimately, understanding. Recognizing her attraction to women early on, Dalia's family wasn't very supportive. But as Dalia accepted herself and began living her truth, she saw a miraculous ideological shift in her own father.

Dalia. All images via "No Longer Alone: LGBT Voices from the Middle East and North Africa"/Human Rights Watch.

"My father was against me in every way," said Dalia. "But he transformed from hateful to accepting and tolerant. He accepted me as his daughter and loved me unconditionally. This was in itself a miracle."

These intrepid humans — many of whom are Muslim — discussed the challenges of reconciling their queer identity with their faith and regional understanding of queerness.

Hamed Sinno, a queer man from Lebanon who sings in a band, faced these challenges. It took him some time to come to terms with his sexuality in a society that constantly made him feel less-than.

But Sinno pushed against the ridicule and got to a place where he accepted himself. "What I didn't understand is that there was nothing wrong with me," said Sinno. "It's the people around me who were wrong."

Norma, a queer Lebanese citizen who decided to not show their face, also went through a long journey to acceptance that began in childhood. Norma talked about one of the earliest moments they felt happy and comfortable.

"I remember the moment perfectly," said Norma. "It was Halloween. It was the first time I wore my sister's skirt and my mom put makeup on me. I still remember that day. How happy I was and how comfortable I felt."

As the report notes, many LGBTQ people in the region deal with hostility, criminalization, and governments that refuse to acknowledge and protect their identities. Because of these pervasive societal norms, queer people in the region can face persecution, estrangement, and even death. But, as Abedellah Taïa of Morocco noted in "No Longer Alone," being queer never has and never will hurt anyone.

Regional activists also show that there's never a single story, and with time and understanding, things do indeed get better.

As Algerian activist Zoheir Djazeri told HRW, it's important to not paint the entire region with one brush stroke. "We don't want the image anymore of just being victims," Djazeiri said. "We want to speak about reality, speak about violence, but also to [show what is] positive."

Living your truth, regardless of what society deems is worthy or acceptable, is the most powerful thing you can do in life.

In the video, and in conversations around the world, accepting one's identity is one of the most important steps in moving toward progress. And, as we've seen over the last decade, societal norms can shift with time. Instead of fighting against the truth, we should empower queer people to create their own spaces and tell their stories.

"At the beginning, I was at war with myself, trying to change myself," said Hajar from Morocco. "In reality, it's not a choice. I cannot change."

The cause for LGBTQ rights to be seen as human rights is a long, ongoing push for justice. While progress has been made, there are still policies both in the United States and around the world that make queer people vulnerable to continued oppression.

By supporting queer rights, fighting to ensure that all people have access to safe and affordable health care, and holding governments accountable for protecting queer constituents, we can create a world where LGBTQ people — no matter their nation of birth  — no longer feel alone. "It's hard when you are young," said Sinno. "And it stays hard, but it gets easier."

Watch "No Longer Alone: LGBT Voices from the Middle East and North Africa" below.