This British weatherman interrupted a live debate on crime with a point we all need to hear. 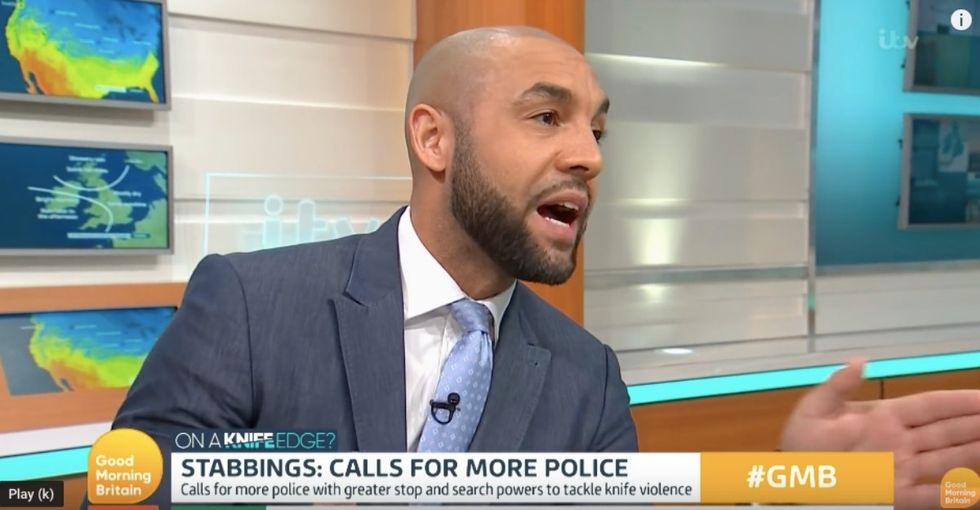 Alex Beresford just couldn't stay silent while listening to a Good Morning Britain debate about knife crime in the UK.

With an increase in knife attacks over the past few years, debates over how to handle knife crime in the United Kingdom are common. Similar to gang-related gun violence in the U.S., the majority of victims and perpetrators of such crimes are black youths living in urban areas. And also like gun violence debates in the U.S., such discussions are too often held without representation from the communities being debated.

That fact compelled weatherman Alex Beresford to interject from off camera during a live Good Morning Britain debate on knife crime.

Police Federation chair, John Apter, was in the middle of arguing for the need for stronger sentencing and more prisons when Beresford shouted from across the studio, "Prison doesn't work, though!" He apologized for interrupting, then made a crucial point that we all need to hear.

Beresford pointed out that prison isn't a good deterrent and won't change the environment that produces and perpetuates violence.

Beresford went on to discuss the issue of stop and search policies targeting young black men. While not saying such searches should never be done, he said he's personally felt the frustration that builds when the innocent are frequently questioned and searched by the police.

"Listen, before I started this job, I was pulled over quite a lot and it used to frustrate me," he said. "You know, I got pulled up just because I had my hood up in the wintertime. And the officer said, 'Why are you driving with your hood up?' and I said, 'Because it's minus one outside. Why can't I have my hood up?'"

Later that day, Beresford explained in a video why he felt the need to chime in on the live segment.

"The reason I really felt that I had to interrupt in the debate around knife crime today," he said, "was because I sat there, in a way actually getting enraged, because it's quite hard for me as a mixed-race person that has grown up in some of the areas that these boys come from just to sit back and say nothing. Because it's easy to point the finger when you've not actually lived that life or had experience of what it's like to be in that environment."

Beresford pointed out that we know the statistics, and the black community knows this is a problem, but stop and search is the wrong thing to focus on. "We need to intervene much earlier down the line," he said. "Let's try and stop this before it gets too far down the road. I think what we see in the media is the end result. You don't see that person, that young boy, that young black boy as a child, you know? We just see the end result."

He added that the media has a responsibility to portray these stories accurately, to share positive stories of black male role models, and to make sure the voices of the communities affected by these issues are represented.

"Whenever we have these debates on television, you often find that the people that are being debated aren't always represented on the program," he said. "For instance, today we were debating a subject about knife crime, but in hindsight it would be lovely to have someone from the community come on and balance the argument and actually talk from experience."

"Don't put these boys into prison if you can help it, that's what I say," he continued. "Teach them something else, show them a different way, because often that's when you you lose young boys into the system forever. They go into prison often for doing something quite petty and then they join up with other like-minded people that give them other ways in which they can commit crime...Prison, for me, I don't think is always the answer."

And his full explanation of why he felt he needed to speak up here: