Think you can't have firsts with an adopted teen? Think again. 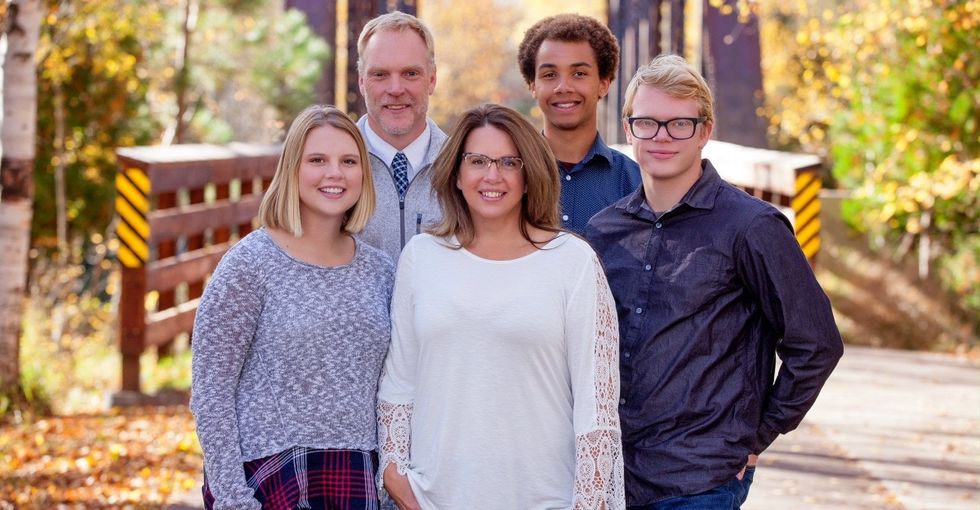 For Scott and Amy Arntson the idea of adoption was always in the back of their minds.

They thought about adoption and talked about it over the years as their biological kids grew up, but the timing just never felt right. Then, two summers ago, they saw a news segment featuring a teenage boy who was waiting for an adoptive family. The segment showcased the hundreds of other teens in their state waiting for permanent families too.

That was it for them. "We looked at each other and said, 'yup, this is our time,'" recalls Amy.

So Scott and Amy began to research adoption from foster care, and quickly realized the great need for families to adopt teens. Roughly 43% of youths actively listed on AdoptUSKids.org are between the ages of 15 and 18 years old. This only solidified their desire to bring a teenager into their family.

The next step was discussing adoption with their kids, Ashleigh and Devan. They wanted it to be a family decision, so everyone had to be on board.

After several discussions over a few days, the kids felt good about it, and the Arntsons were ready to move forward with looking for their new family member.

Amy and Scott reached out to an adoption agency in their hometown of Duluth, Minnesota called North Homes Children and Family Services, and began the process. Eventually they were matched with a 17-year-old boy named Isaiah.

Almost immediately, Amy knew he was going to be a part of their family.

Isaiah is an athlete who enjoys running, and Scott is the head track and field coach at a local high school. Isaiah also has an amazing smile that can only be described as contagious.

Isaiah. All photos via the Arntsons, used with permission.

So Scott and Amy drove four hours to Isaiah's foster home to meet him.

"He’s the only child we ever met," says Amy. "As soon as I met him I knew that he would join our family."

Over dinner, they talked about the sports Isaiah plays and the town of Duluth, which Isaiah had visited and enjoyed. They also talked about math being a difficult subject for him and how Scott might be able to help, as he's also a math teacher. Even though it was their first time meeting, the family felt a connection almost instantly.

The Arntsons invited Isaiah to spend Thanksgiving with them, which was the day after they met him. Amy and her daughter, Ashleigh, drove eight hours to bring Isaiah back to their home for the holiday the very next day.

Between the Thanksgiving and Christmas holidays, Isaiah spent most of his weekends with the Arntsons, getting to know them and all their quirks. He was there for some sibling squabbles, two car breakdowns, and a performance by their family band. By the end of December, the Arntsons knew they wanted Isaiah to join their family, but recognized it had to be his decision.

Thankfully, it didn't take long for him to say, 'yes.'

"When you hold a newborn baby in your arms, it’s the exact same thing as when you have a teenager who says they want to join your family," says Amy. "It's the most humbling, loving experience."

The official adoption day was moving for Isaiah too.

"Seeing my dad smile, that was pretty cool," he recalls. "He’s a serious guy, he always has that coach’s face and he smiled. It was a good day."

There was definitely an adjustment period for everyone after Isaiah moved in with the Arnstons.

For example, Amy felt like she needed to put extra effort in so Isaiah always knew that he was loved. One of the things Isaiah loves is scary movies, so she would go see them all in the theaters with him, even though she's not a scary movie person.

Scott also had some adjustments to make.

"I thought after raising two other teens I had an idea of how to raise a teen," he notes. "I was wrong."

The family also took Isaiah on vacations — something he hadn't really experienced before. They spent nights camping, playing games and sharing stories — and that's when Amy feels like Isaiah really started to let his guard down and opened up to them.

Back at home, Isaiah had no trouble starting at his new school. Devan, now his older brother, was a senior there and took Isaiah under his wing at first, but Isaiah's infectious laughter and friendly personality helped him make new friends in no time.

And before the Arntsons knew it, they were experiencing all kinds of firsts with him — prom, getting his driver's license, high school graduation, and moving him into his freshman dorm at college.

Devan and Isaiah ready for prom.

Moving to college was a big deal and left Scott and Amy feeling incredibly proud and emotional, especially since Isaiah is their last child to leave the nest.

While these moments may not have been every first of his life, they were every bit as special.

Amy says she didn't need to rock Isaiah to sleep to love him — she loves him because he's her son.

She wants other prospective parents to know that when you adopt an older child, it doesn't mean they're going to leave when they turn 18. Just like any child, they want a family who will be there for them throughout their life.

When kids in foster care age out of the system, they often have little to no support. A permanent family provides a support system that will forever change their future.

"That's what having a family is," says Amy. "Someone who's there no matter what."

The learn more about the Arntsons, check out the video below: