This 8-minute video will make you think twice before buying bottled water. 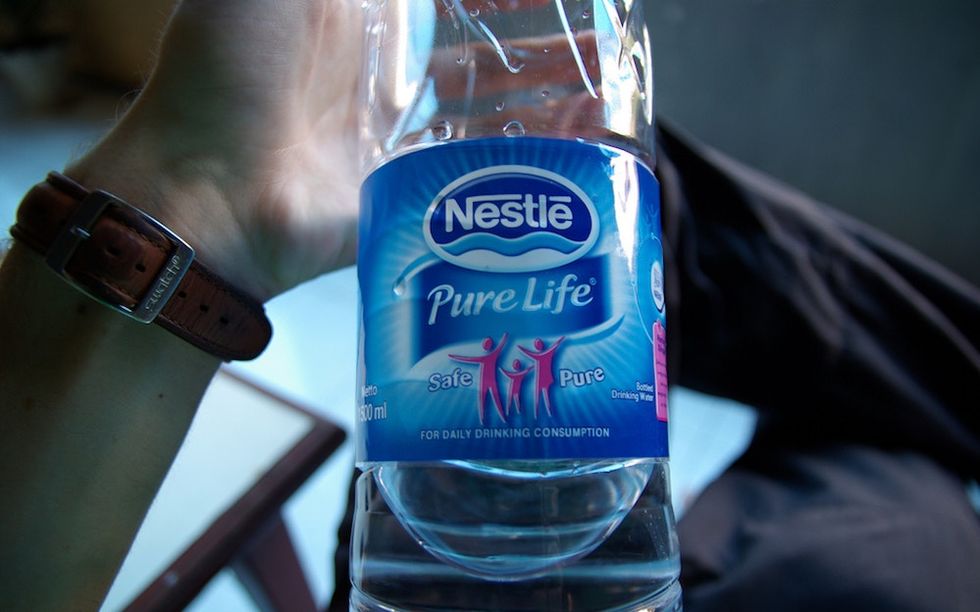 When someone asks if you want bottled or tap water, which do you choose?

It seems like an innocuous decision — just a matter of preference. But there's actually a lot riding on that choice, according to " The Story of Bottled Water," an eight-minute video that's drawn millions of views since it was posted in 2010.

A 2008 Nestlé advertisement in Canada infamously read, "Bottled water is the most environmentally responsible consumer product in the world."

The bold claim by the world's largest bottled water company drew the ire of environmentalists across Canada. Nestlé never proved the claim, but they sent it to print, so it must have been true, right?

Well, as "The Story of Bottled Water" notes, the energy in the oil it takes to make the plastic water bottles sold every year in the U.S. could fuel a million cars.

All GIFs from The Story of Stuff Project/YouTube.

Since when was it "environmentally responsible" to burn huge volumes of fossil fuels?

"It is another product we do not need. Bottled water companies are wasting resources and exacerbating climate change. Transport is the fastest growing source of greenhouse gas emissions, and transporting water adds to that."

It's tough to know exactly how much fuel is used for shipping bottled water, but with the industry showing consistent growth, it's safe to bet its fuel needs are, too.

Bottled water also takes a toll on the global climate long after it quenches our thirst.

Up to 80% of empty water bottles end up in landfills, where waste decomposes over time, releasing methane, a potent greenhouse gas. According to the EPA, landfills are the third largest source of methane emissions in the U.S.

Discarded plastic bottles that don't meet land or sea are sometimes burned in incinerators that release more heat-trapping gases into the atmosphere.

There's no known statement on whether Nestlé woke up to the fallacy of their claims, but it is clear bottled water is far from "the most environmentally responsible consumer product in the world." And we'd all be doing the Earth a favor by avoiding it like a planet-warming plague.

NOTE: Though we reached out to Nestlé Waters North America to see if the company's perspective has shifted on the environmental impacts of bottled water, they declined to comment and instead pointed us to their sustainability page.

Watch "The Story of Bottled Water" to learn more:

Want to be a part of the solution? Here are a few ways to get involved:

"Thank you in advance!" — Earth