These 6 women got written out of tech history. They're finally being recognized.

The dawn of the Digital Revolution was ushered in by 6 women in Philadelphia in the mid-1900s. 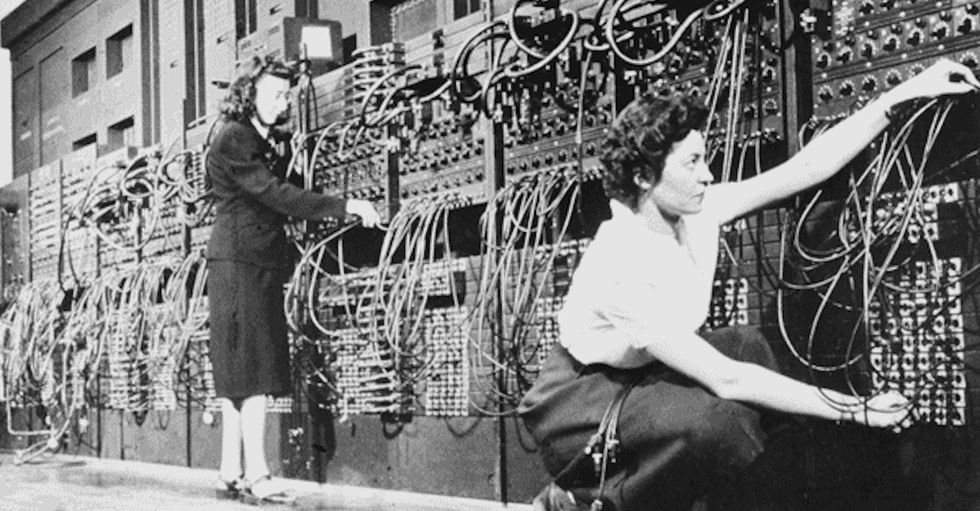 70 years ago, six Philadelphia women were recruited by the United States Army for a very special project.

Considered to be the world's first "general-purpose" computer, the ENIAC was built with the goal of more quickly calculating the ballistics trajectories of missiles during wartime.

Even though the women all hailed from mathematical backgrounds, they'd never operated such a massive computer before.

So they started out with a three-month crash course in Aberdeen, Pennsylvania, where they learned the many different computing systems necessary to run the ENIAC.

Upon their return to the Moore School of Engineering in Philadelphia, the six women were thrust headfirst into the ENIAC program and given little more than a stack of wiring diagrams for the computer's many panels as their guide.

Weighing a few dozen tons and filling a 1,500-square-foot room, it was a monstrosity that was as physically demanding to operate as it was mentally tasking.

Working double and triple shifts six days a week, this ragtag crew of six female "computers" (which was a job title back then) lugged cables and trays between panels on the massive machine. Occasionally they even had to crawl inside it to fix faulty tubes.

"Betty [Holberton] and I were the workhorses and finishers, tying up loose ends," said Jean Bartik in a 2011 interview, echoing Holberton's notorious motto, "Look like a girl, act like a lady, and work like a dog."

It was exhausting, backbreaking work, but these six women helped to usher in the dawn of the Digital Revolution.

They were essentially the first computer programmers in the U.S.

Meanwhile, I still can't figure out how to hook up an HDMI cable to my TV. GIF via Computer History Archives, used with permission.

When the ENIAC was unveiled on Feb. 15, 1946, it was lauded by the press as a "Giant Brain" because of its otherworldly speed. It could compute complex mathematical equations up to 10,000 times faster than any other electro-mechanical machines in existence.

Of course, being that this was the 1940s, the revolutionary work of these women specifically was almost completely overlooked.

Despite debugging every last issue that the ENIAC faced and teaching the technology to their male replacements when they returned home from World War II, the women were treated as little more than models to show off the machine. In fact, they weren't even invited to the celebratory dinner that was held after the unveiling ceremony.

A utility model of the ENIAC. Photo by Keystone for Getty Images.

"We thought that was terrible," said Bartik in an interview with CNN. "It was not a secret. The only problem was nobody was interested. They didn't know anything about it."

Thankfully, these technological trailblazers are finally receiving their due credit ... more than 50 years later.

In 1997, all six women were inducted into the Women in Technology International Hall of Fame. That same year, Holberton received the Augusta Ada Lovelace Award, the highest award given by the Association of Women in Computing.

In 2011, the Philadelphia City Council officially declared Feb. 15 as ENIAC Day in honor of the group's extraordinary work, and just last year, the Holberton School, a project-based school for software engineers, was founded in San Francisco.

The long-unexplored story of the team's groundbreaking work was also brought to light in the 2014 documentary, "The Computers," thanks to the efforts of The ENIAC Programmers Project.

Another batch of female computer engineers. Photo from U.S. Army.

Anyone who owns a smartphone or computer owes a huge debt of gratitude to the work of these pioneering women.

But let's not forget that there's still progress to be made for women who work in technology, even now.

To this day, women still only account for a fraction of technology-based jobs, due in part to the ridiculous stereotype that they "just aren't cut out for it." Sadly, Google's 30% female employment rate represents one of the highest percentages in the tech industry — this despite a recent gender-blind study of GitHub coding suggesting that women measure up as slightly better coders than men.

To put it simply, diversity in business is good for business (duh).

A more diverse talent pool means a broader range of perspectives when it comes to problem-solving and innovation. Statistically speaking, women have also risen to become one of the most important demographic in the technology industry and users of a far wider variety of technology than their male counterparts.

A lack of diversity in tech can actually hurt businesses, according to a study published in McKinsey: "Businesses in the top quartile in terms of racial and ethnic diversity are 35% more like to have financial returns above their respective national industry medians."

We should already know this. Holberton, Antonelli, and four other women proved it over 70 years ago. Thousands of women are still proving it today.

And since this whole "technology" thing ain't slowing down any time soon, we're left with two simple options: We start giving women the recognition (and employment) they deserve in the tech industry, or we get used to "reprogramming" our smartphones the only way that most of us know how:

"Can you hang on a sec? I think you're BREAKING UP." GIF via "Entourage."