There's a Guinness World Record for origami elephants. The story behind it is delightful. 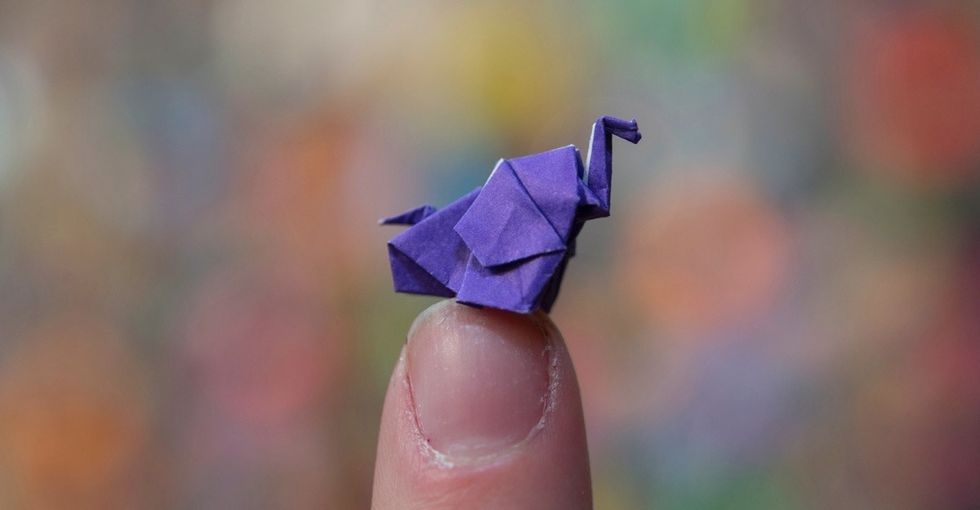 The Wildlife Conservation Society and the Bronx Zoo just set a weird, colorful world record in the name of elephant conservation.

A lot of wild elephants are in danger. Habitat loss and ivory poaching have been pushing their numbers lower and lower.

In an effort to support elephant conservation, the Bronx Zoo and the Wildlife Conservation Society's 96 elephants campaign joined together. They wanted to make an impactful statement by collecting as many origami elephants as possible to show that people really do care about these animals.

They put out the call on social media with the #JoinTheFold and #ElephantOrigamiChallenge hashtags and campaigns.

The world responded with a truly gigantic outpouring of elephant love.

How gigantic was this? The zoo received a grand total of over 204,000 papercraft pachyderms from all around the world.

It was a veritable origami menagerie.

Some of the elephants were quite small.

Others were pretty dang big.

They weren't all the same style either! Turns out, there's a bunch of different ways to make your own little papercraft pachyderm.

They came in from as far as Iran, Kazakhstan, and Egypt.

The zoo received origami elephants from more than 40 different countries and all 50 U.S. states. Participants included 45 other zoos, a class of deaf students, and a 109-year-old woman — all sending in their colorful additions to the project.

Using this amazing outpouring of love, the zoo put together a 78,564-strong elephant display.

It even got into the Guinness Book of World Records as the largest origami elephant herd ever!

They more than doubled the previous record, which was set by the London/Whipsnade Zoo at a now relatively measly 33,764 elephants. The Bronx Zoo's full display won't be open to the public, but they say they're planning on incorporating them into a holiday exhibit.

The zoo and Wildlife Conservation Society hope the exhibit will inspire people to help save elephants.