The reason this woman walked from Mexico to Canada over 5 months is highly personal. 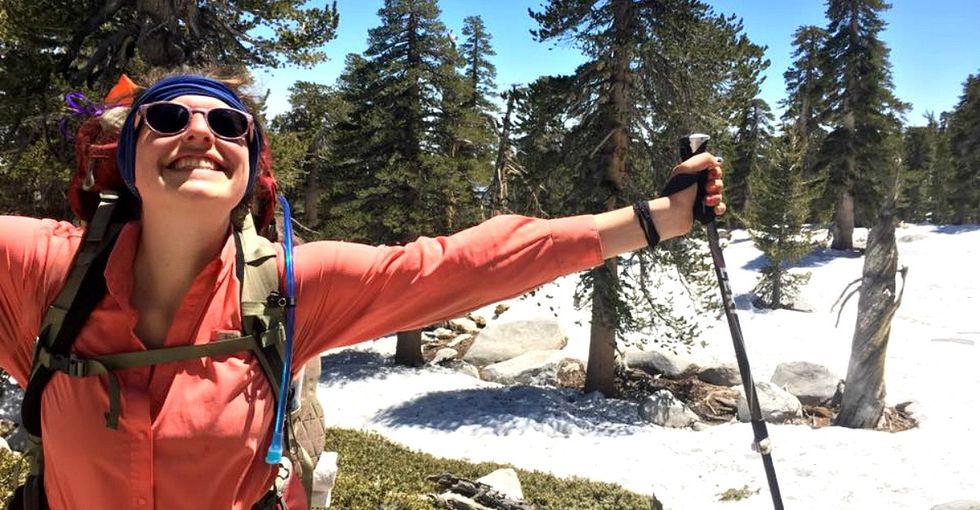 Sophia Spooner's dad always finished what he started. That's one thing that kept Sophia going during her 2,659-mile hike.

Sophia's dad, Ray, passed away from ALS (amyotrophic lateral sclerosis) — a neuromuscular disease that causes weakness and eventual paralysis of all voluntary muscles, including those used for breathing and swallowing — on Aug. 8, 2016.

10 months later, Sophia started hiking the Pacific Crest Trail, which spans from the Mexico/California border all the way up to the Washington/Canada border, to raise money for the Muscular Dystrophy Association (MDA) and its ALS Care Centers, which provide specialized care for people like Ray.

"I wanted to do something I thought my dad would be proud of," Spooner says. "I know he would’ve been proud of me for doing this.”

Spooner on the PCT. Photo via Sophia Spooner.

Ray was no stranger to tackling major feats of endurance either.

Immediately after finding out he had ALS in 2014, Ray decided to bike across the country from San Diego, California, to St. Augustine, Florida, to raise funds for MDA. Not only did he complete his mission, he also raised $85,000 in the process and encouraged others to fundraise too, bringing the total to more than $120,000.

This was the initial inspiration for Sophia's walk.

"One thing I learned from him is if you do something crazy, people will give you money for a cause that you care about," Spooner says.

But what led her to the Pacific Crest Trail wasn't just this one example of strength. It was a culmination of everything her family went through after Ray's diagnosis.

Sophia and her dad Ray. Photo via Sophia Spooner.

Sophia had just returned from a semester abroad in India when her family sat her down and told her that her dad had ALS. It was January 2015, which meant she had to go back to school after being dealt this enormous blow.

Her last year and a half of college was anything but easy because she felt so removed from everything that was going on back home in Urbana, Illinois. Then she graduated and things changed dramatically.

Her father's condition had advanced rapidly, and she was immediately thrown into the role of caregiver along with her mother and siblings.

Going from being totally disconnected to caring for her father full-time was hard but ultimately life-affirming.

The experience solidified a bond between Sophia and her family in a way that nothing else could. It often involved challenges, especially when Ray lost the ability to speak, but there were still beautiful moments that Sophia cherishes.

The family had a ritual of putting on Leonard Cohen's album "Popular Problems" while they got Ray ready for bed; then they'd all lie down with him until he fell asleep.

And even when he could no longer speak, he'd tell his family he loved them through a series of breaths.

Despite the difficulties, Sophia and her dad's relationship grew stronger, especially because he got to see how capable his daughter really was.

Ray faced life and death head-on. Sophia wanted to do the same, and that meant stepping out of her comfort zone.

Sophia looking out on a sunset while on her hike. Photo via Sophia Spooner.

While her dad was a prolific hiker, Sophia had no such experience when she set out alone to hike the Pacific Crest Trail. It was altogether exciting and terrifying at first, but then she made some new friends on the trail and things started to get easier.

"I set up my tent the first night and yelled out, ‘Does anyone want to play Euchre with me?’ I got a couple takers and ended up hiking with them for more than 1,000 miles,” Sophia recalls.

She was by far the youngest — and probably the least experienced — among her group, but her confidence made up for it.

Sophia with her hiking buddies. Photo via Sophia Spooner.

Covering almost 20 miles a day was certainly taxing, but her emotional journey hit her just as hard, if not harder.

Her new friends were incredibly supportive, but she longed to have someone there who really understood what the past year had been like for her. Thankfully, her boyfriend Yoni was able to join her at mile 485.

Sophia with Yoni on the PCT. Photo via Sophia Spooner.

"Just being around someone who was aware of what I was going through was so liberating," Sophia says.

However, that didn't mean there weren't extremely difficult days.

Sophia with her hiking crew trudging through the mountains. Photo by Kayla Miller.

Some days the hikers trudging through heavy snow; others, they were laboring under oppressive heat. On one of the hottest days, they had to scale an impossibly steep hill. Sophia thought they could take a breather under a small tree at the top of it, but when they reached it, it provided little to no shade. That's when she heard her dad for the first time on the trail.

He told her, "Whelp, you better keep going!"

So she did, knowing he still had her back.

He was with her at night too in the form of the Lou Reed song "Perfect Day," from the album "Transformer" that Ray had “assigned” Sophia to listen to before and after his death. She would also play it over and over again on her phone as she hiked.

Her dad wasn't the only one pushing her forward when things got tough though. The MDA was also behind her.

Sophia at mile 500 on the PCT. Photo via Sophia Spooner.

MDA helped Sophia launch her campaign to raise money for ALS care and cheered her on just when she was about to give up.

"I was in Northern California and very very ready to quit the trail," Sophia recalls.

Then MDA reached out to her with messages of encouragement. She knew she couldn't let her cause or the MDA and ALS communities down.

Sophia finished her walk on Sept. 9 and is eager to get back home and start on a new adventure — life after college.

She'll always carry the lessons she learned on the trail and while caring for her father: live life beyond limits, keep your loved ones close, and always finish what you start.

For more about Sophia's story, check out the video below:

Read more about MDA and give to Sophia’s #LiveUnlimited fundraiser.