Teachers and kids around the country are celebrating this $29 million act of generosity. 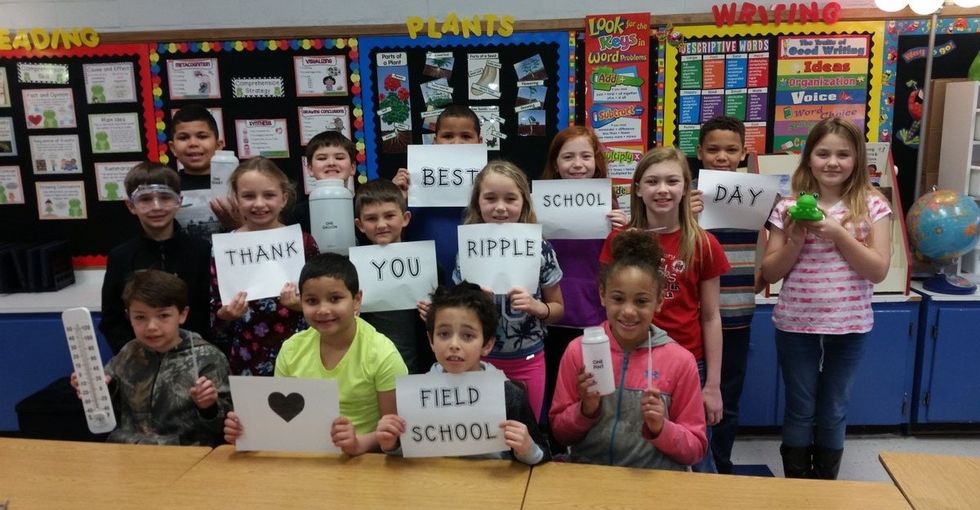 DonorsChoose.org is where teachers go to crowdfund classroom supplies and where awesomely empathetic people go to support them.

It's an absolutely fantastic charity and has helped tens of millions of students since its founding in 2000. Current projects on the site include a teacher raising money to buy classroom laptops for students in Worcester, Massachusetts, a push to buy bean bag chairs for a class in Section, Alabama, and more than 22,000 other campaigns.

For one brief moment in late March, there was nothing on the website. Every single campaign was paid for. What seemed like a glitch turned out to be something much better.

"Late Show" host Stephen Colbert announced the donation on air. A big supporter of DonorsChoose, in 2015, Colbert paid off every campaign in his home state of South Carolina, an $800,000 donation. Ripple's $29-million act of generosity took care of more than 35,647 funding requests.

DonorsChoose founder Charles Best posted a video with Ripple senior vice president of marketing Monica Long, giving some more info on how the donation went down.

We can’t believe that just happened. With the largest single donation in our history, Ripple just funded EVERY SINGLE CLASSROOM PROJECT on DonorsChoose.org.THANK YOU to Ripple for making it the #BestSchoolDay for 28,000 teachers and over a million students!

Don't take it from them though. Why not hear directly from some of the teachers whose projects were funded?

Using the hashtag #BestSchoolDay, teachers across the country posted heartwarming videos and notes on social media. Some were on the verge of tears as they posted their videos, and others showed photos of the students who would be helped. There was just a lot of gratitude to go around.

Thank you @Ripple for your generosity! Thank you @DonorsChoose for helping me bring hands-on learning to my student… https://t.co/IouO1PQbDC
— Heather Cleland (@Heather Cleland)1522214040.0

Thank you Ripple! Tomorrow will be the #bestschoolday ever! My class is getting a brand new computer!
— Ashley Elizabeth (@Ashley Elizabeth)1522209637.0

Thank you @ripple for funding our Donors Choose project "Next Generation Scientists!" We can't wait to get our new,… https://t.co/h0FXnL2hcD
— Tiffany Acree (@Tiffany Acree)1522245741.0

Now imagine what it'd be like if every day was a #BestSchoolDay? Believe it or not, we can make that happen, and here's how.

Again, DonorsChoose is a wonderful organization that does important work in the world — but how messed up is it that teachers are in a position where they need to count on the kindness of strangers to be able to give their students the best education possible? Teachers are real-life heroes, and their time would almost certainly be better spent developing lesson plans and building up new generations instead of trying to find creative ways to supplement their classrooms' shoestring budgets.

In several states across the country, teachers are rising up to demand better wages and working conditions — and it's in everyone's best interest to ensure they get it. At the start of April, teachers in Kentucky marched on the state capitol building to call on Gov. Matt Bevin to veto an overhaul of their pension plan. Oklahoma and West Virginia teachers recently walked off the job for better pay and funding.

Kentucky public school teachers outside the state capitol on April 2, 2018, calling on Gov. Matt Bevin to veto a bill that would gut their pension plan. Photo by Bill Pugliano/Getty Images.

We have the power to fix this by electing politicians, especially at the state and local levels, who pledge to fund schools and take care of our teachers.

According to the U.S. Department of Education, roughly 90 cents out of every dollar spent on education comes from sources other than the federal government. That means that if you want to change things like teacher pay or school funding, the best place to get started is at the state and local level. We owe it to our teachers and their students to create the best learning environment possible, so let's elect officials willing to give them what they need.

People rallying outside the Oklahoma state capitol for increases in pay and school funding. Photo by J. Pat Carter/Getty Images.

Until then, we can all be thankful that groups like DonorsChoose exist to help bridge the funding gap.