She turned code into 'spells,' and the results are very Harry Potter. In the best way. 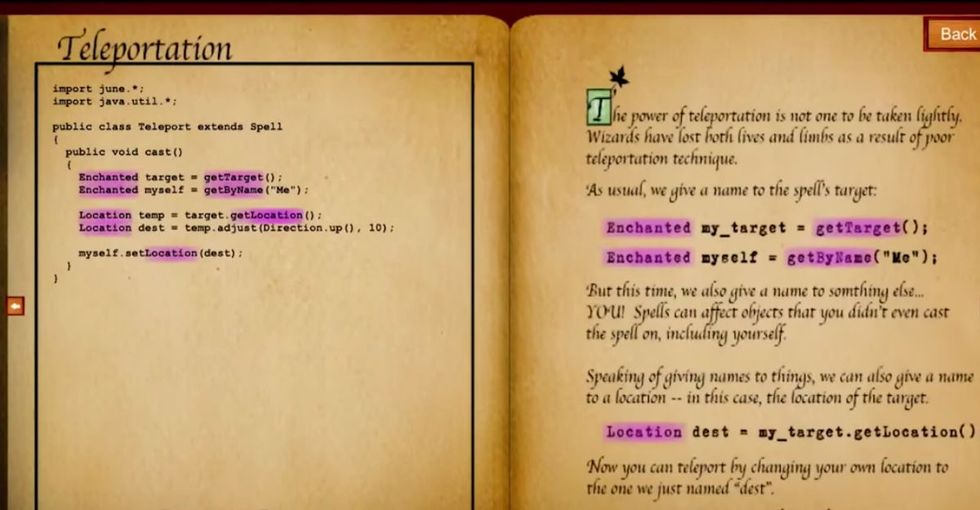 When one teacher turned coding into casting spells, things got very Harry Potter in the very best way.

Until University of California San Diego's Sarah Guthals came up with this new approach to educational games, most were like chocolate covered broccoli: a thin layer of yummy (play) hiding a big old piece of yuck (learning).

"I love this term chocolate covered broccoli. And that has been what educational games have been up until now." Sarah says.

So she created CodeSpells, an educational game that teaches coding and computer science. And the results are truly magical.

All the spell-casting, none of the pure-evil life-threatening stuff. Here's how it works:

With a pen and paper!

"Getting the kids to actually write the spells down on paper, it's a slower process, and they actually think about it more"

The spells start out pretty basic. But as the CodeSpells Kickstarter points out, as players get more fluent in the coding of CodeSpells, they can eventually "code in typed Javascript!" That's huge.

Then they team them up to cast their spells.

It's the industry standard of a driver and a navigator in coding to work as a specific type of team, so these kids are learning early.

The teamwork not only helps them work together, it makes them better computer scientists!

"Because they have to articulate what it is they want, they start to use the language of computer science much more expertly."

And once they've learned spells, it's time to make stuff.

Stuff THEY want to make.

Guthals uses the concept of STEAM (science, technology, engineering, art, and math) in her lessons.

And the results are so creative!

"It's important to show that computer science is expressive."

"Everything related to STEM, you're going to have to have some creativity."

The personal touch that the A in STEAM — art — has done wonders to inspire kids to keep pursuing coding, even outside of the classroom.

Instead of using their code to create boring things — one thing a lot of computer science programs do is make kids write code that makes a calculator (snooze) — they make their own art projects. Comic books, video games — art that moves!

Guthals' goal is to make this teaching system accessible for schools everywhere.

Guthal's ideas could change all that.

I don't have to tell you that we're living in a world where computer and smartphone technology is becoming more and more important and exciting. Or that teaching kids how to MAKE technology should be as important teaching them to ENJOY and USE technology.

But I told you anyway. Because our kids are missing out.

I'm sharing this so that more people know about the exciting future ahead and the work being done to give our kids such a gift and so that we can all watch the young wizards who are already making it happen.

For more of a peek at the game Guthals created, check out this video!