Sessions used the Bible to justify separating families at the border. Colbert shot back. 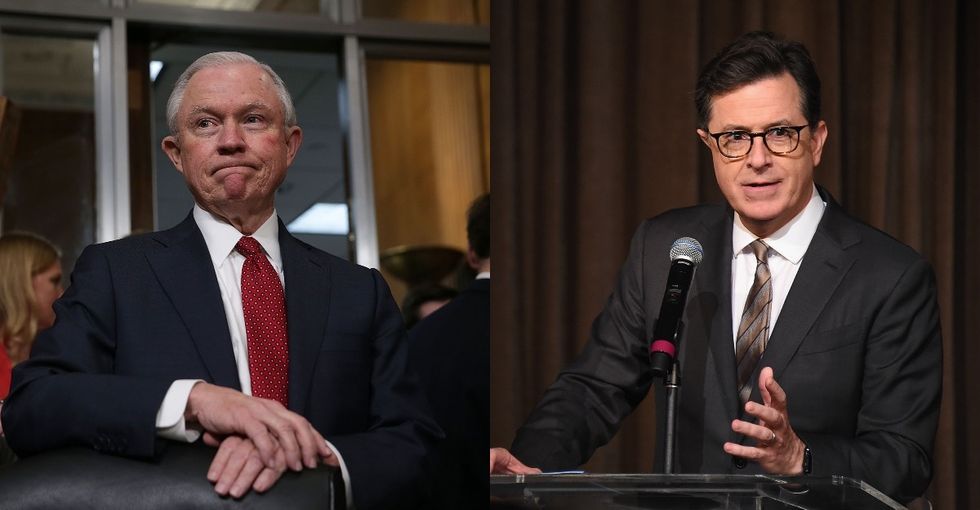 Due to new border policy, there's been no end to the horrifying stories of parents and children being separated as they try to cross into America.

Under the "zero tolerance" policy in 2018 that criminalizes all border crossings — previously only a civil offense — even those seeking refuge and asylum are punished as criminals. And families are being ripped apart. It all feels like something out of a novel about a terrifying dystopian regime. And yet it's all truly, terrifying real.

Attorney General Jeff Sessions is defending the law using some circular logic — and the Bible.

Speaking in Indiana on June 14, 2018, Sessions justified the policy by suggesting that it's "good" because "it's a law." His primary source of evidence?  The Bible.

"First, illegal entry into the United States is a crime, as it should be. Persons who violate the law of our nation are subject to prosecution. I would cite you to the Apostle Paul and his clear and wise command in Romans 13, to obey the laws of the government because God has ordained them for the purpose of order."

On Colbert's show, the devout Catholic took Sessions' policy to task, referring to it as "evil" and exhorting his audience to fight the government's use of "cruelty as a deterrent."

As for Sessions' cherry-picked Bible passage, Colbert had this to say:

"I will give Sessions this. That is what Romans 13:1 says. You gotta have laws. But if he just read a little bit further into Romans 13:10, it says 'love your neighbor as yourself. Love does no harm to a neighbor. Therefore love is the fulfillment of the law.' But I'm not surprised Sessions didn't read the whole thing. After all, Jesus said 'suffer the children to come unto me,' but I'm pretty sure all Sessions saw was the words children and suffer and said 'I'm on it.'"

Colbert wants people to see this policy for what it is and to do something about it.

Colbert also urged his audience, "Call your elected representatives and demand they do something. Because I sincerely believe that it doesn't matter who you voted for. Because if we let this happen in our name, we are a feckless country."