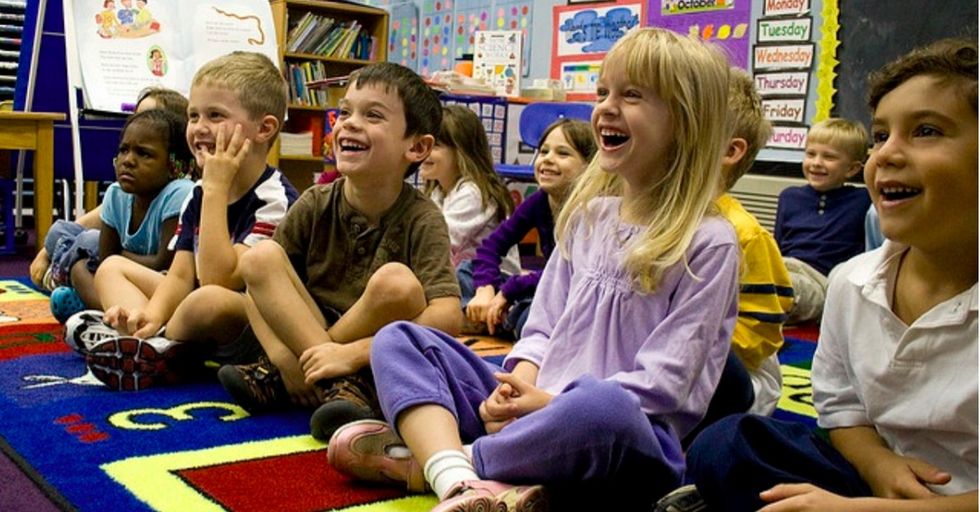 It can be a little stressful.

All GIFs from "Billy Madison."

But a new study shows that when children learn to interact effectively with their peers and control their emotions, it can have an enormous impact on how their adult lives take shape. And according to the study, kids should be spending more time on these skills in school.

Nope, it's not hippie nonsense. It's science.

Researchers measured the social skills of 800 kindergarteners in 1991. Two decades later, they looked them up to see how things turned out.

Kindergarten teachers evaluated the kids with a portion of something called the Social Competence Scale by rating statements like "The child is good at understanding other's feelings" on a handy "Not at all/A little/Moderately well/Well/Very well" scale.

The research team used these responses to give each kid a "social competency score," which they then stored in what I assume was a manila folder somewhere for 19 years, or until each kid was 25. At that point, they gathered some basic information about the now-grown-ups and did some fancy statistical stuff to see whether their early social skills held any predictive value.

Here's what they found.

1. Those good test scores we covet? They still matter, but maybe not for the reasons we thought.

Traditional thinking says that if a kid gets good grades and test scores, he or she must be really smart, right? After all, there is a proven correlation between having a better GPA in high school and making more money later in life.

But what that test score doesn't tell you is how many times a kid worked with a study partner to crack a tough problem, or went to the teacher for extra help, or resisted the urge to watch TV instead of preparing for a test.

The researchers behind this project wrote, "Success in school involves both social-emotional and cognitive skills, because social interactions, attention, and self-control affect readiness for learning."

That's a fancy way of saying that while some kids may just be flat-out brilliant, most of them need more than just smarts to succeed. Maybe it wouldn't hurt spending a little more time in school teaching kids about the social half of the equation.

2. Skills like sharing and cooperating pay off later in life.

We know we need to look beyond GPA and state-mandated testing to figure out which kids are on the right path. That's why the researchers zeroed in so heavily on that social competency score.

What they found probably isn't too surprising: Kids who related well to their peers, handled their emotions better, and were good at resolving problems went on to have more successful lives.

What's surprising is just how strong the correlation was.

An increase of a single point in social competency score showed a child would be 54% more likely to earn a high school diploma, twice as likely to graduate with a college degree, and 46% more likely to have a stable, full-time job at age 25.

The kids who were always stealing toys, breaking things, and having meltdowns? More likely to have run-ins with the law and substance abuse problems.

3. Social behaviors can be learned and unlearned — meaning it's never too late to change.

The researchers called some of these pro-social behaviors like sharing and cooperating "malleable," or changeable.

Let's face it: Some kids are just never going to be rocket scientists. Turns out there are physical differences in our brains that make learning easier for some people than others. But settling disputes with peers? That's something kids (and adults) can always continue to improve on.

And guess what? For a lot of kids, these behaviors come from their parents. The more you're able to demonstrate positive social traits like warmth and empathy, the better off your kids will be.

So can we all agree to stop yelling at people when they take the parking spot we wanted?

But what does it all mean?

This study has definite limitations, which its researchers happily admit. While it did its best to control for as many environmental factors as possible, it ultimately leans pretty heavily on whether a teacher thought a kid was just "good" or "very good" at a given trait.

Still, the 19-year study paints a pretty clear picture: Pro-social behavior matters, even at a young age. And because it can be learned, it's a great "target for prevention or intervention efforts."

The bottom line? We need to do more than just teach kids information. We need to invest in teaching them how to relate to others and how to handle the things they're feeling inside.

Ignoring social skills in our curricula could have huge ramifications for our kids down the road.

Overcoming fear: this nurse won’t let a pandemic get in the way of her work

Temwa Mzumara knows firsthand what it feels like to watch helplessly as a loved one fights to stay alive. In fact, experiencing that level of fear and vulnerability is what inspired her to become a nurse anesthetist. She wanted to be involved in the process of not only keeping critically ill people alive, but offering them peace in the midst of the unknown.

"I want to, in the minutes before taking the patient into surgery, develop a trusting and therapeutic relationship and help instill hope," said Mzumara. Especially now, with Covid restrictions, loved ones are unable to be at the side of a patient heading to surgery which makes the ability to understand and quiet her patients' fears such an important part of what she does.

Temwa | Heroes Behind the Masks presented by CeraVe www.youtube.com

Dedicated to making a difference in the lives of her patients, Nurse Mzumara is one of the four nurses featured in Heroes Behind the Masks, a digital content series by CeraVe® that honors nurses who go above and beyond to provide safe and quality care to their patients and communities.