Monica Puig is the perfect example of why our human brains love underdogs. 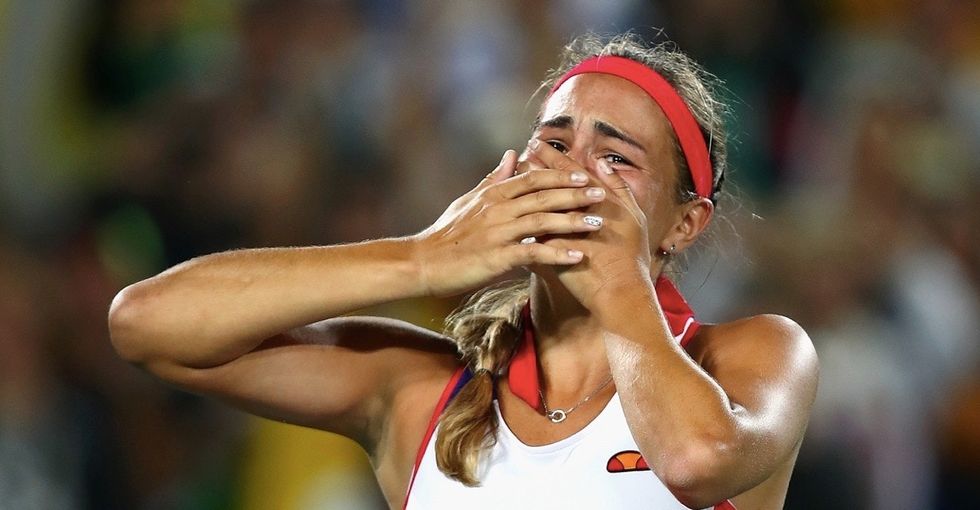 Puig represented Puerto Rico in women's tennis at the 2016 Rio Olympics. Before Rio, Puerto Rico hadn't won a gold medal in, well, any Olympic sport in more than 60 years. Puig was an unlikely bet to get one this year too. In the ranks of the top tennis champs in the world, Puig wasn't even in the top 20. Going into the Olympics, she was ranked 37th.

Ahead of her? A number of seriously intimidating opponents, including Garbine Muguruza, who won the 2016 French Open just a few months earlier.

Puig was, in short, the classic underdog.

Nevertheless, she entered the court and held her own. And she didn't just hold her own. She won, and kept on winning. Eventually, she ended up matched against Germany's Angelique Kerber — the tennis champ ranked second best in the world.

It'd be hard to look at that lineup and not feel a little spark of support for Puig starting to flare in your heart. The first game swung in Puig's favor, 6-4. In the second, Kerber came back 4-6.

It was down to the last game. The final game. Thousands of Puerto Ricans gathered together to watch. Even Catholic Masses were delayed as the entire island rooted for their underdog champion.

And what happened? Puig took it 6-1 and, with it, Puerto Rico's first gold medal.

Rooting for the underdogs is something humans love to do.

Maybe there's an alien species out there somewhere who hates "The Karate Kid." But if that's the case, they can stay on their own planet ... because here on Earth, we root for the little guy. It's what we do.

A lot of studies have confirmed this too. In their incredibly comprehensive 2007 paper, three researchers from the University of South Florida, led by professor Joseph Vandello, found that we truly do love underdogs, whether that's in sports, politics, or other areas.

Why? Maybe it's because we feel like underdogs have more heart.

Vandello and his colleagues found that when people sat down to watch a competition between a favored-winner and an underdog, they felt like the underdog tried harder.

Watching Puig go up against the odds-on favorite, we can't help but attribute some sort of Disney-esque, Oh-Captain-My-Captain pluck to her. And we can't help but like the person who tries harder and fights for what she thinks she deserves.

Plus, there's the fact that we just fundamentally want to live in a fair world.

So what do we do? We root for the underdog. Vandello suggests we might do this because it subconsciously feels like our support could level the odds, but it might also simply be our desire for an affirmation that the world really is fair, just, and true.

And then there's the emotional payoff.

We get more bang for our emotional buck by rooting for the underdog. After all, if we root for the favorite and they win, well, we kind of expected that, didn't we? Even if they had a huge chance of winning, Cobra Kai winning the tournament would have felt kind of ... boring, wouldn't it? (Also, what are you doing rooting for Cobra Kai?!)

On the other hand, it's a huge deal when the underdog wins. It's surprising! It's amazing! There'll be books about it! Public radio hosts will argue about how it happened! And in the middle of all that will be us — the true, die-hard fans, basking in the feeling of "I always knew they could do it."

And if we compare the two, it turns out that the emotional high of the underdog outweighs the higher odds of the top dogs. So, from an emotional perspective, investing in the underdog is just smart betting. And if they lose, well, it was a long shot anyway, so we can console ourselves with that.

Whatever the case, there's one thing that's undeniable: Seeing Puig claim gold this year was amazing.

Her opponents played well and they deserve accolades of their own — after all, you don't get to the Olympics without exceptional training and hard work. But there's still something amazing about seeing the little guy win.

Maybe that spark of underdog support is a weird quirk of human nature. Maybe. But my brain can't help but smile when I see Puig up there with that giant gold medal. Because really, truly, I believe she deserves it.