#MeToo creator answers 10 questions and perfectly explains what the movement is all about. 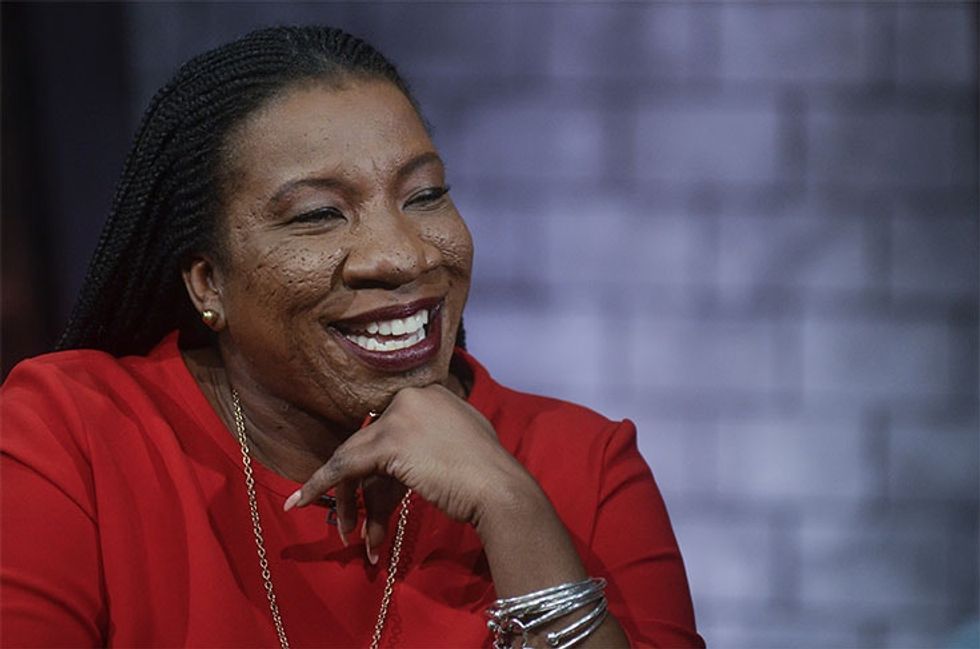 Tarana Burke has been working as an activist for years, but her work has become internationally recognized in recent months after #MeToo went viral.

A longtime advocate for sexual assault survivors, Burke has devoted her life to improving the lives of young girls from marginalized groups. Historically, women of color have often been left out or virtually ignored in conversations around sexual assault and abuse. Burke has made black and brown girls the center of her work and is a driving force in making the #MeToo movement intersectional.

Burke’s visible leadership points to an important shift in feminist causes: Women of color must participate and create, but also be elevated as leaders and innovators.

Burke talked with Upworthy about this need and the importance of intersectionality in the #MeToo movement.

Was there anything that affected your journey early on for working with survivors?

I'm a survivor of sexual assault and sexual violence multiple times, and that was a catalyst for sure. Seeing how much trauma there was in our community was also definitely a catalyst for wanting to use my organizing background to do something to confront this issue.

How has the public response to survivors of sexual assault changed since you began working with them?

In these last several months, it’s changed exponentially. You have to really fight to get people to pay attention to sexual violence as an issue, specifically as a social justice issue.

It’s changed exponentially since it’s become so public and there’s so much media attention to it. People now have the space and the capacity to talk about this in a different way, and those of us who do the work have been fond of taking advantage of the moment to support survivors.

How has social media impacted this huge change within the last few months?

Well, I mean, it’s the catalyst for the change, right? The message has been carried forward and ... has helped shape the public narrative. Mainstream media has done a lot to shape the general dialogue, but I think social media is a great tool for undoing what the mainstream media gets wrong.

When #MeToo gained traction online, many white feminists jumped on this and someone distorted the message and its origins. Social media resurrected your work on influence on this movement. Can you speak to how you felt during that experience and what your response was?

I felt concerned about what was going to happen to the body of work that I'd created, how it was going to be understood in this moment of pop culture meeting that work. But that was quickly dispelled within days ... I was able to insert myself into the conversation.

Intersectionality has been central to the movement's progression today. How do you think that your leadership as black woman visibly creating and leading this movement affects it as a whole?

I think that my position as a leader of this work will contribute to that tradition of black women in leadership. Hopefully, what we'll see is a shift in people’s response to leadership.

Why did you make the decision to work with black and brown girls specifically?

Because that’s the work that I do and I’ve always done it. I’ve always worked in my community, and I’ve put my people first. The work expanded over the years and has expanded to deal with all kinds of survivors, but I have always centered the most marginalized people.

How do you think making intersectionality so central to the movement impacts feminist causes overall?

Any work — social justice work, any kind of work that is involving justice — has to have an intersectional lens. I think people have learned a word, but I don’t know if they’ve learned a practice. I think the word is used abnormally at this point for people that are having conversations, sort of like white privilege. But understanding the word and being able to regurgitate the definition is very different from amplification and actual action happening. So that remains to be seen.

There’s a growing understanding around it, and I think the younger generation really has a stronger grasp of the need for that approach to doing the work than (possibly) people in my generation.

Why do you think that young people have that stronger grasp?

It’s not so much of what people are learning in school — it’s those people that are speaking out on how to do this work. They know have access to this work that other folks didn’t have access to. It’s starting to shift the way that people think and interact.

The #MeToo movement has grown quite a bit in the last few months. How do you feel about the state of the movement today?

I think that there are positives and negatives, like anything else. I think there are huge misconceptions about what this movement is about. And the biggest part of the work for those of us who are doing the work is to change the narrative. But it's also gives us an expanded platform to talk about sexual violence in ways that we have been determined to since the beginning. So we have to take advantage of that.

Some critics have insinuated (or plainly stated) that the movement has lost its way or has been diluted, even comparing it to a witch hunt. What would you say in response to that criticism?

I would say that they don’t know what this movement is.

First and foremost, not even including my body of work before this moment took place, Alyssa Milano’s tweet had nothing to do with anything but people making a declaration about what they experienced, so that the world could see the magnitude of it.

Everything else that has happened, every consequence, every fallout, has nothing to do with the work that we have to do to support survivors. And that’s all this movement is about. It’s about supporting survivors and doing the work to end sexual violence.

Burke is the founder of Just Be Inc. She has a forthcoming memoir on her life and the ways in which sexual violence impacts the lives of black and brown girls in America set for release in 2019.

Even before he became president, Donald Trump was known for his unhindered use of Twitter. He and his many press secretaries have lauded the president's frequently used and abused social media account as his way of connecting directly with the people, but if you scroll through his feed, it usually seems more like a venue for him to brag, bully people, and air his grievances. Oh, and lie a whole bunch.

Then there is Steak-umm, the anti-Trump Twitter account. And by "anti-Trump" I don't mean against Trump, but rather the opposite of Trump. Instead of griping and sharing falsehoods that constantly need fact-checking while being the single biggest source of coronavirus misinformation, Steak-umm use their account to share helpful tips for avoiding misinformation in the midst of a confusing pandemic, to explain psychological concepts like "cognitive dissonance" and "dualism," and to encourage people to really examine and think about things before sharing them.