Mayor Pete was given a sign language name. His response was perfect. 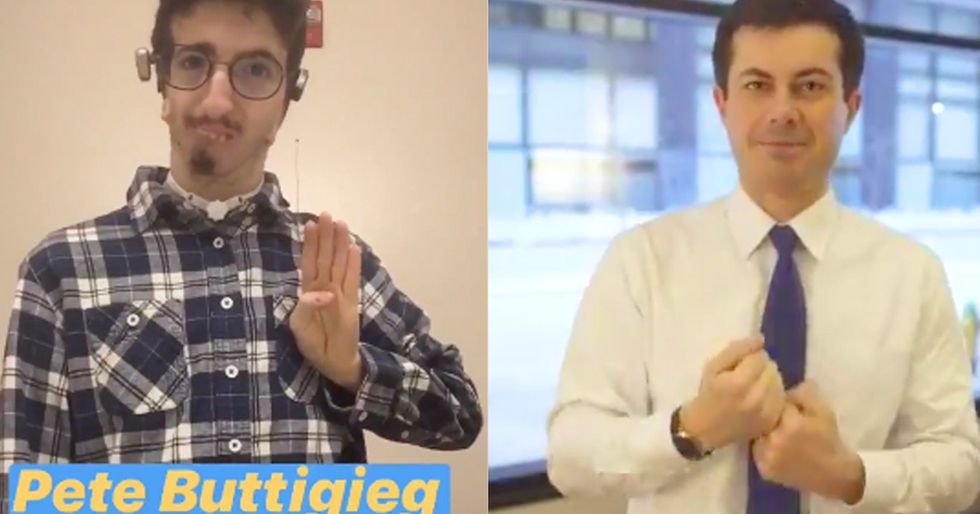 Receiving a sign name is a very special gift within the Deaf community. The name usually comes from a member within the community and often reflects the person’s character or unique qualities.

Buttgieg, the mayor of South Bend, Indiana, has ostensibly come out of nowhere to become a top-tier Democratic candidate in 2020.

Given his new logo includes the imagery of a bridge and “build bridges, not walls,” his sign name is P bridged across the chest to B.

Mayor Pete responded to the touching gift with a heartfelt video where he responded in American Sign Language (ASL). "Hi Andy, appreciate your support! Thank you," Buttigieg signed.

Peasants was “overwhelmed” by the response because he had never seen a presidential candidate speak to his community in ASL.

“Hey Pete, pleasure's all mine! Honestly, when I first saw this video I felt overwhelmed with emotion, I almost cried. I've never seen someone running for president use sign language before. A lot of politicians speak about inclusivity, but very few talk the talk and walk the walk or in this case, sign the sign and walk the walk.

To see you put in effort to try to start to learn and use a language that’s crucial to how I and many see others communicate, participate, and identify in this world, is just another example of why I'm thrilled to keep supporting and helping to spread your message. I hope you continue to learn about different cultures and communities, and include them in your vision."

He then shared his sign name with Mayor Pete and offered to help him learn ASL.

Mayor Pete’s understanding of the importance of language shouldn’t come as a shock to his supporters. Buttigieg is a Harvard and Oxford graduate who speaks eight different languages: English, Norwegian, Spanish, Italian, Maltese, Arabic, Dari, and French. He took up Norweigan just so he could read one of his favorite authors in their native tongue.

Buttigieg’s attempts to relate to the disabled community stand in stark contrast to the current president.

Donald Trump mocked a disabled reporter while on the campaign trail in 2016. He’s also proposed a policy that would monitor disabled people on social media for benefit fraud.