Man's anonymous open letter to the woman he followed to her car will give you chills. 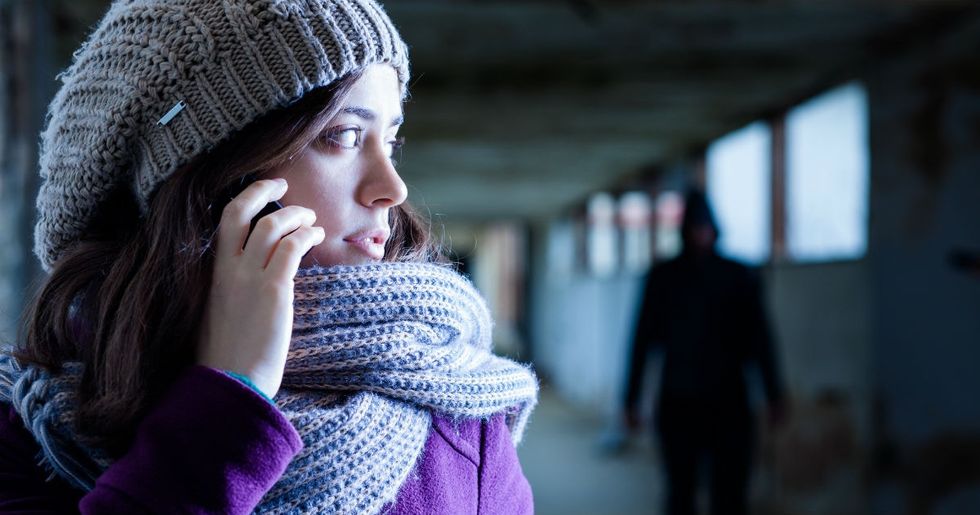 The feeling of being followed is scary for everyone, but when you're a woman, it's a special sort of nightmare.

We're told constantly we should spend money on cabs instead of public transportation after dark, we should always walk with a friend at night or jog with a friend in the morning, and we should turn our keys into weapons by white-knuckling them in our fists.

Out of all of the men I know, there isn't a single one who carries pepper spray, a whistle, or any other kind of protective device on their person at all times. That's why, when a man on Reddit posted a sort of "Missed Connections"-style letter about a woman he followed, people were quick to brace themselves.

The man, "u/Karlosmdq" posted the following:

We were walking in oposite directions near the new studient accomodations, you briefly looked at me and kept walking and a couple of seconds later I turned around and started following you, I notice the moment you realised that I was following you by how your pace changed, your shoulders squared and you grabbed your phone. That didn't stopped me, you just kept walking and I maintained the distance (some 50 feet behind you) pretending to talk on my phone, I thought a couple of times on closing the distance and introduce myself, talk to you, but I didn't, so you kept walking, throuwing glances to check where I was. I could also tell you that once you turned around the corner to the dead end street next to the motorway (the only one near the city centre were parking is not measured) were your car (and mine) was parked that if you had being wearing tennis shoes you would probably have started to run, but wisely you kept you pace in your high heel boots. I stopped by my car, yours was further down the street, and used my phone again, and I saw you taking a picture or video of my when you passed by my side in your car.

What you probably never noticed was the other two guys, the ones in the other sidewalk, the ones that pointed at you and started to follow you before we crossed the first time, you didn't notice how they looked at you or the fact that they seemed to be on drugs, or a bit drunk, or maybe both. You also didn't notice when you passed me in your car that they were in the corner of the dead end street, looking at you in your car passing by and then at me. You also missed the next ten minutes while I waited in my car for the police to arrive (that I called while you were getting into your car), the 15 minutes of questions that followed and me showing them the picture of the two guys that I took while I was following you.

I really sorry that I scared you, but to be completely honest, I was really scared myself, I'm no hero by any means and my instinct was telling me to get the f*** out of there, but you could have been my wife (she parks in the same street) or my daughter and I wouldn't fogived myself I something happened and I did nothing to stopped it.

1. I shared this because the situation scared me, and if a similar situation happened somewhere else I wish that the situation is not ignored or shrugged off. Do I have any advice? Dunno, probably just this: if you think that you are being followed or that something is wrong, don’t wait to see what happen, call the police, call a friend, a family member, knock on a door or get into a shop, worst case scenario you’ll look a bit paranoid.

2. She was carrying some sort of briefcase alongside her purse and was well dressed, I think that the briefcase was what called those guys attention .

3. They seemed to be waiting for an opportunity, that was the main reason why I didn’t approached, I was afraid that I would sort of trigger them and offer a second target (still, probably wrong on my side, but in the moment that's what I thought).

4. I called the police because if those guys were trying to assault her, more than likely it wasn’t the first time and / or they would go for another victim, if it was a mistake worst case scenario they spent 10 mins talking to the police (no idea if they caught them).

5. I parked my car in the dead end street and was walking towards the city centre, she was coming from the city centre, obviously I didn’t know where she was heading, if instead of turning to the dead end street she had continued walking I would had probably approach her, or she would had reach another street that has more traffic and there are more people walking around.

Many people were moved by the story:

My daughter is attending school in Belfast. She is an international student, out of her element, homesick, and going through some stuff, so being completely aware of her surroundings is probably not her strong suit right now. Hopefully not, but this could have been her. Thank you, even if she doesn't know.

That's a good deed, friend. I'm a woman with two daughters. I hope someone would do the same for them, or me. Wouldn't it be nice if we all looked out for one another like this? Well done.

That was NOT an ending that I expected. You are an amazing person, thank you for keeping an eye on that woman. You probably saved her life.

However, some people questioned his method, as "TemporaryBoyfriend," asked:

I would personally be okay with being approached gently, with non-threatening posture (hands at sides, not in pockets, arms and face relaxed, normal eye contact) and having a man tell me what's going on. In this case a greeting wouldn't be necessary, just something like, "Excuse me. I noticed those men start following you, and I got concerned. Would it be alright if I walked with you?" And take her answer as is. If she says no, tell her to be careful and alert her that you're going to call the police (if the situation warrants it), and then stop following her/walking with her.

Regardless of his method, we're all glad she got home safely

Can you figure out what this doodle is?