Leslie Knope would be proud of how this Parks and Rec team is handling a graffiti artist. 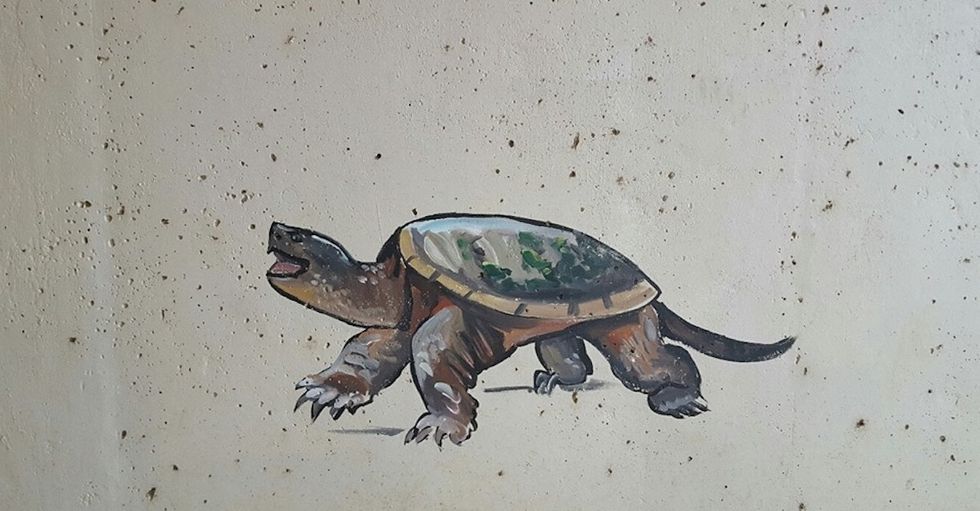 First there was the deer. Then came the armadillo.

The paintings popped up in the Bear Creek Parkway tunnel. No one took credit.

Thus, a small mystery began to excite the 42,000 residents of Keller, Texas.

Who left the graffiti? Why did they choose to paint these animals in particular? And what will become of these works of art?

What little information has comes from the City of Keller Government Facebook page, which has been sharing updates as the mystery unfolds. The Parks & Recreation Department first became aware of the deer painting on January 11, according to a Facebook post sharing the first image. Over the weekend, an armadillo appeared. A bird joined them a few days later.

Usually works of graffiti are painted over in short order, but this is where the plot thickens. Was parks manager Gary Davis angry? Not at all. In fact, the post noted he doesn’t have the heart to paint over it.

The animals were there to stay.

From the start, it’s been clear the city wants to know the artist’s identity. But the whodunnit isn’t going to end in an arrest.

The city isn't looking to reprimand the artist. They're looking to help them.

Cody Maberry, the director of community cervices for Keller's Parks & Recreation Department, says he wants to find the artist to “give them the credit that they deserve for their talent.”

That’s not all. Maberry is also hopeful that the artist will be interested in working together.

“We've got a public arts board and we would love to work together to maybe help them,” he says. “We want to create a mural under there. What do we want? What do they need? How can we make it the best it can be?"

This hope that the city will get to work with the person (or persons!) responsible is no secret. The game is afoot, and they’re enjoying every minute of it: “We're not sure who is more excited: the Parks folks or the Public Arts Board,” they wrote on Facebook.

Although the artist has yet to come forward, they're still hard at work. On the morning of Jan. 26, a turtle was added to the artist's creative menagerie.

Did Banksy make a trip down to Texas? Will the artist or artists ever come forward? Is the turtle the last of the series? At this time, the mystery remains unsolved.

As for the paintings, the city doesn't have plans to remove them any time soon — unless someone comes in and defaces them.

For now, the deer, armadillo, bird, and turtle have found a safe place to call home in Keller, Texas.