Lamar Odom is tragic proof that reality TV is not reality at all. 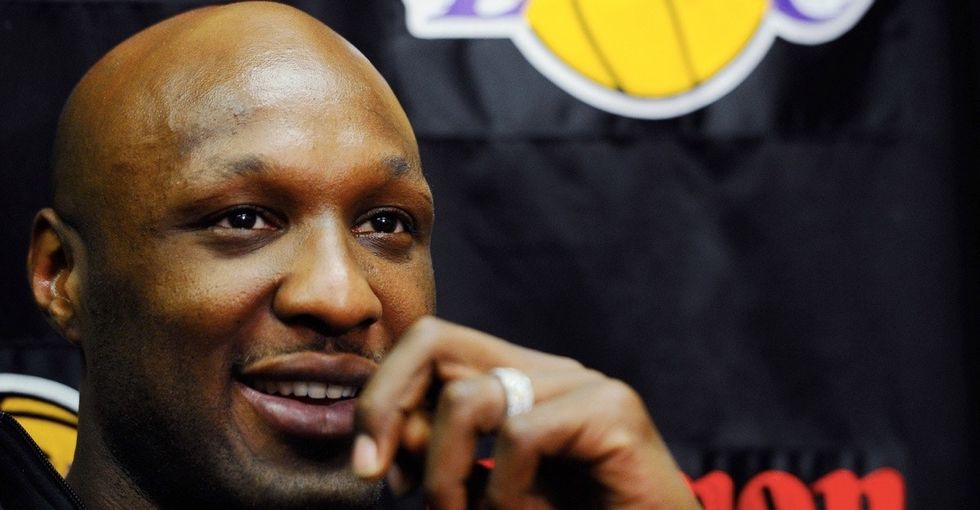 According to numerous sources, 35-year-old former NBA star Lamar Odom is fighting for his life.

The free agent who has played for a handful of highly ranked teams over the course of his career, including the Los Angeles Clippers and the Miami Heat, helped the Los Angeles Lakers win two NBA championships in 2010 and 2011 and has long been well loved by his teammates and millions of sports fans across the globe.

Today it's reported that he is lying in a hospital bed, in critical condition, unable to breathe on his own after being found unconscious, due as E! News announced to a drug overdose. What happened?

Despite his celebrity status, Lamar's life was anything but charmed.

His mother died of cancer when he was 12 years old. His father was a heroin addict for most of his life. His infant son died of SIDS in 2006. And just this summer, two of his good friends died of complications due to drug abuse just days apart. Yet, despite these hardships, and his reputation within the basketball world as "troubled" since his days as a highly ranked college player, the well liked, big-hearted team player and father of three had created a life that, from afar, looked like the quintessential success story.

Then, in 2009, he met and married Khloe Kardashian of "Keeping Up With The Kardashians" fame. He was immediately thrust into the very unreal world of reality television.

Thanks to the Kardashians, millions of people who would otherwise never have paid any attention to Odom and who had no appreciation for him as an athlete, let alone as a survivor with very real personal triumphs and struggles, knew him as just another side character in the Kardashian universe.

His whirlwind romance with Khloe, their marriage, their still-pending divorce, and his long-rumored battle with substance abuse was highlighted on "Kardashians" long after he was no longer appearing on it. As recently as last week, viewers saw Khloe answer a call from him as he shared the news of his best friend's sudden death. She expressed concern to the cameras that anything could send him "spiraling." That sad moment however, like all others, was followed by a commercial break, a whistling theme song, and another quirky storyline. Because that's reality TV.

But with Odom in the hospital, in the off-camera and unscripted world that we all inhabit, things have gotten just a little too real.

Reports that Odom has suffered brain damage and a stroke don't sound like how an entertaining, lighthearted storyline is supposed to go. If Lamar and Khloe's story was scripted for TV, she would rush to his bedside, and Lamar would wake up any minute with no lingering health effects, learn his lesson, and never do drugs again, just like that.

But in reality, addiction is defined as a chronic, relapsing brain disease — meaning that only about a third of people who are sober less than a year will remain sober. And according to the National Institute on Drug Abuse, relapse rates for addiction are similar to "flare up" rates for any other chronic illness like diabetes or asthma when medication isn't taken. Drug addicts bounce in and out of rehab, and recovery is messy.

If this were made for reality TV, Lamar would return to the NBA, call off his divorce, and have the romantic reunion Khloe has longed for, celebrated in a Very Special Episode ("About Lamar"?) next season. But in reality, many addicts end up losing their battle with drugs — and their lives — before ever experiencing prolonged recovery despite the wishes and support of their loved ones.

Khloe, Lamar, and his children. Photo by Jason Merritt/Getty Images.

In real life, most of our struggles and hardships are private. We do our best to control what of our lives is shared with the world and what secrets we keep behind closed doors. Exposure can wreak havoc on one's personal and professional life, as we saw in an angry paparazzi video filmed last year where Odom railed against how he had been treated by the media and how the negative attention around his drug use and marriage had affected his life.

If all we know of Lamar is what we see on reality TV, we see him as a high-maintenance ex, who, while deeply loved, was just too troubled for our main character; he is a voice on the other end of the telephone that won't stop calling. In reality, he is a whole person — a father, a son, and a friend. He is a generous guy who bought fancy new suits for rookie players and financially supported his friends and family. And he is an imperfect man dealing with the side effects of a life filled with heartache and pain.

As he lies in a hospital bed in Nevada fighting for his life, the world is remembering what real, unedited life looks like.

America likes its reality TV served with much of the reality removed. We appreciate watching a version of life that is scripted to sound perfectly unscripted, a natural, no-makeup look that takes a ton of makeup to achieve, an endearing family with "normal problems" that can conveniently be solved in half-hour episodes and with millions of dollars.

In other words, we love reality TV because it looks a little bit like life but offers an escape from the one that most of us are living.

It provides refuge from a life that is hard and full of complicated, complex challenges like the legacy of poverty or the clutches of addiction and depression — problems that Lamar was all too familiar with.

So what happens when "characters" like Lamar have their struggles exposed, and we suddenly see them as just as fragile and real as we are?

We are reminded that despite our desire to escape it, real life is beautiful and wonderful but never easy. It is messy and painful but also precious. And it is worth living.

His struggles, all too common for millions of Americans, should remind us that no matter what illusions our pop culture has created, from the gated communities of Beverly Hills to the housing projects of New Orleans, life at its essence boils down to two simple mandates for us all:

1. We must take care of ourselves.

2. We must take care of each other.

That is really all there is. The privileges and the responsibilities of dealing with our issues and helping others deal with theirs make up the reality of off-camera life. Lamar Odom is in need of care, and his journey is so much more than a reality TV plotline. It is, just like each of our lives, very very real.