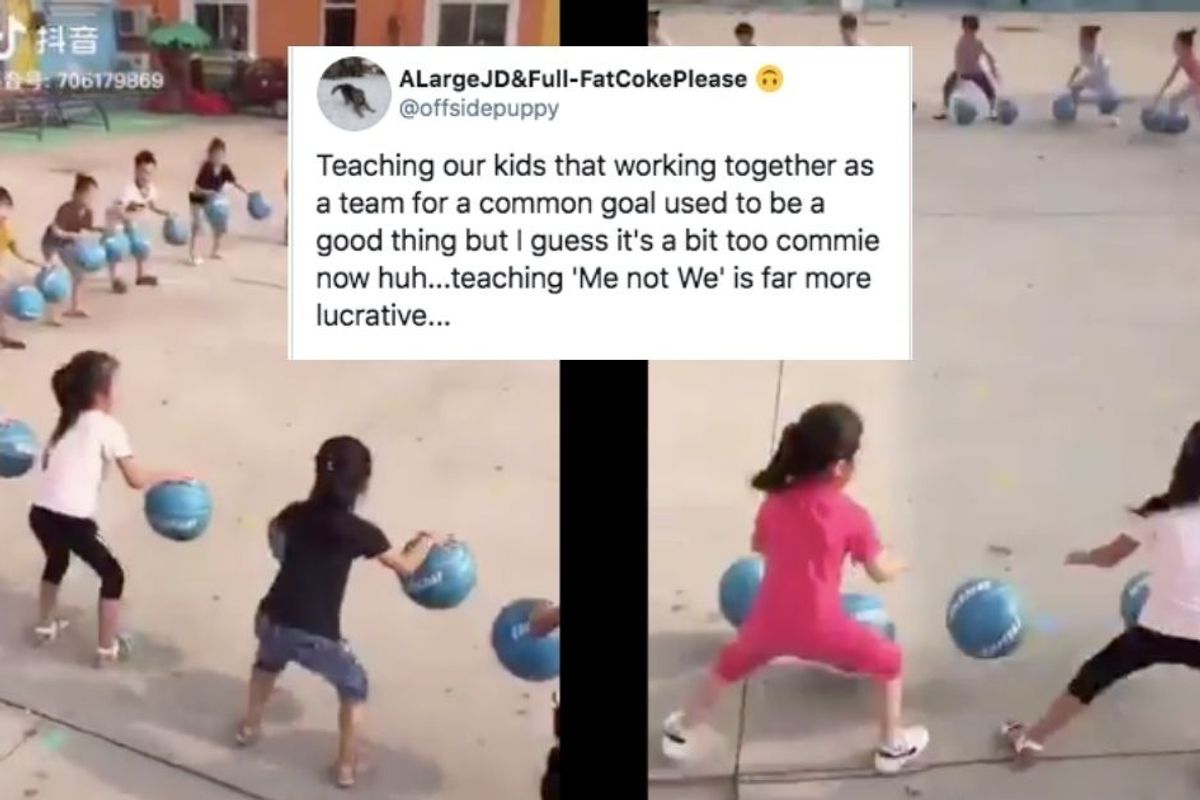 It's been nearly 100 years since Hermann Rorschach introduced the well-known inkblot test used by psychologists to analyze personality characteristics and emotional processing. Where one person sees a bat, another may see a butterfly. One person might find an inkblot shape soothing while another finds it unnerving.

Whether the test truly tells psychologists anything definitive, there's no doubt that our perceptions are colored by our thoughts, emotions, and experiences. And that's quite clear in people's reactions to this video from a school in China.

The video, shared by ShanghaiPanda on Twitter, shows a large circle of children bouncing dozens of balls in unison and moving around the circle in a rhythmic pattern. "China's kindergarten game: Cooperation," the post reads.

Responses to the post reveal a wide range of perceptions of the purpose and value of the activity. As a former teacher, I see kids learning and practicing excellent hand-eye coordination and spatial awareness. I also see them working together, cooperating to keep the balls moving in unison. To me, it's a really cool example of using the whole body to perform a task and focusing one's attention on what's in front of them while preparing for what's to come. It also builds trust, as you have to trust that your neighbor is going to perform their task of bouncing the ball at the right time, and your other neighbor has to trust that you will do the same. (A far better lesson than, say, the cut-through terror and individual dominance most of us remember from playing dodgeball in school.)

From my perspective, this is a valuable group activity for young kids that teaches multiple skills at the same time.

But for others, it's a creepy example of group-think indoctrination, molding kids to accept uniformity and train them into obedience.

@thinking_panda Doesn't look like a game to me. Seems more like training in automatism and obedience. Just the kin… https://t.co/LnaRghwsDI
— Liberal Furibundo (@Liberal Furibundo)1598228256.0

If the first thing you think of when you think of Chinese culture is communist indoctrination, then I can see why this video would elicit that response. But that doesn't make it correct or okay.

Thankfully, most of those responses were met with rebuttals that showed the hypocrisy and xenophobia inherent in them.

Considering how we have kids recite the pledge of allegiance to the U.S. flag every morning in unison, the "indoctrination" argument falls a bit flat.

It's not hard to imagine very different responses if this were a group of American kids coordinating to do the same thing. They would be hailed as impressive kids who worked toward a goal, not communists.

Not to mention, nearly anything can be twisted into something dark or sinister simply by describing it that way, as evidenced by this description of "musical chairs."

The video also ignited some interesting conversations about competition vs. coordination.

Ultimately, the idea that working together in unison to build skills and create a cool effect is somehow "communist indoctrination" is purely a product of people's perceptions about China and its people. After all, our marching bands and cheer squads do the same thing.

If our first impression or reaction to a video of kids doing something educational in another country is "that's creepy" or "ew, communism" we may want to check ourselves. Replace those kids faces with ones who look American to you and be honest about what your reaction would be to see it. Our prejudices can color our perceptions, and it's important for all of us to acknowledge and challenge our own thoughts.

From Your Site Articles
Related Articles Around the Web
education
Design