I'm a queer black woman. This is how you can help me feel safe in Trump's America.

'Let your whispering become a violent roar. Let us know that you won’t leave us to fight alone.' 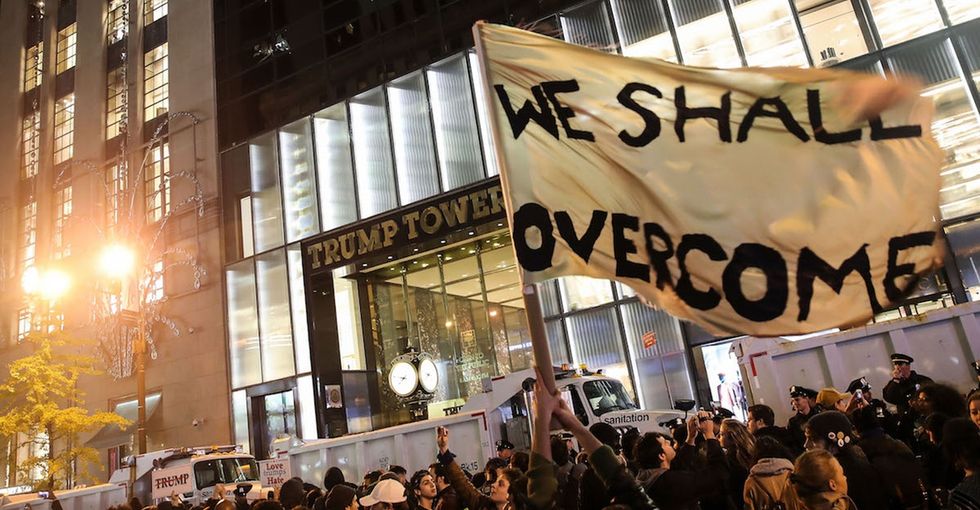 I am a black, queer woman.

And on election night in America, I was made perfectly aware of just how much many Americans are not ready for me.

In all honesty, I am not truly surprised by this election's outcome — hatred has always been embedded in the fabric of this country's design. America has never been the one to admit its faults. I often feel like we believe that if we don’t talk about a problem, then there won’t be a problem. As George Santayana, a Spanish philosopher, once said, “Those who do not learn from history are doomed to repeat it.”

Never owning up to our hatred and intolerance of anyone not white, rich, Christian, or male, is exactly what Trump tapped into to win this election.

Trump played on the fear of the unknown, and America allowed it.

Now, many of us, minorities specifically, must be prepared for whatever monstrosities are thrown our way. We must prepare for warfare. Mental warfare. Psychological warfare. Physical warfare. We must keep our heads up and faith high.

So, allies, what do I need from you this week?

Minorities might be strong, but we’ll need you too. I know that you might not know how you could help us. I know that you might feel guilty. But I need you to not allow this to deter your activism. Get involved. Help us fight the fight. If you are deterred, fight harder — this is what we are used to. Look out for us. Continue to go to protests. Continue to defend us. Have our backs.

Let your whispering become a violent roar. Let us know that you won’t leave us to fight alone.

In these trying times, we need to unify more than ever before.

We need to collect ourselves and focus on how we will overcome. The country has made a mistake, but we can brave the oncoming storm. We may be in America, but we are not of it. America has allowed hate to consume it, but we will not allow hate to consume us.