His 5-yr-old was bullied for wearing nail polish. The internet showed up with mad support. 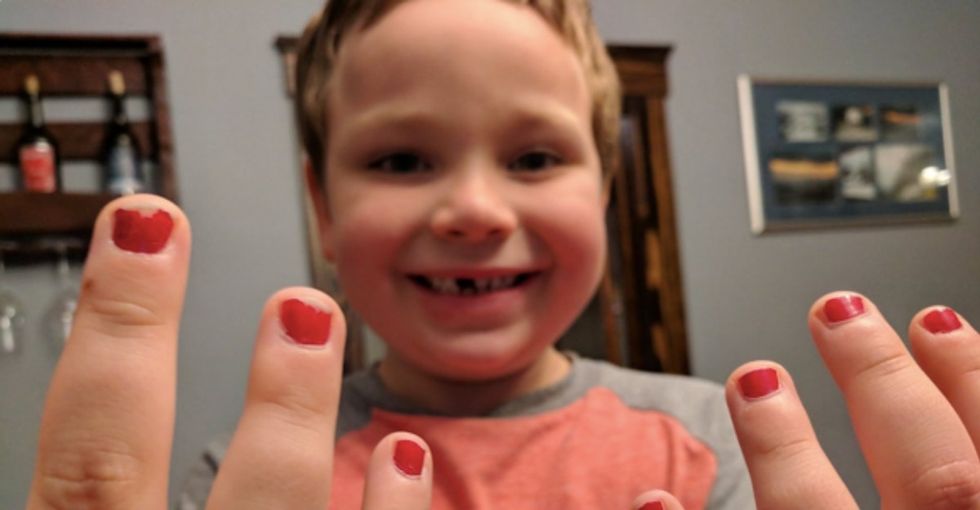 Aaron Gouveia is raising his three boys to reject toxic masculinity. But unfortunately, that garbage is everywhere.

Gouveia is the dad behind the website The Daddy Files, and his Twitter thread about what happened when his 5-year-old wore fingernail polish to kindergarten has gone viral.

It starts off as a sad story, but don't worry—it gets better.

Gouveia's son, Sam, is 5 years old. Dad says that Sam is what many would refer to as a "boy's boy"—rough and tumble, loud, always dirty, loves trucks and sports. etc.

Sam also loves a lot of "girl" things. He carries purses and loves to paint his nails bright colors because he thinks they "look beautiful."

Sam has a collection of purses because he likes to carry things around. And he also loves to have his nails painted… https://t.co/obPAsAHkF1
— Daddy Files (@Daddy Files)1540254002.0

When Sam wore red nail polish to school, his kindergarten peers bullied him.

Gouveia tries not to reinforce unnecessary gender norms and says, "Sam has absolutely no concept of nail polish only being for girls or reason to think anyone would possibly have a problem with beautiful nails."

Unfortunately, that's not true for many of his classmates. When he wore nail polish to school, kids called him names and told him to take the polish off all day long.

These are 5-year-olds. Even at this young age, they are not only receiving the message that nail polish is only for girls, but also that it's acceptable to bully someone who defies that arbitrary "norm."

But his classmates did have a problem. A big one. Sam was ridiculed for being a boy with nail polish. They called h… https://t.co/wPApNigEs0
— Daddy Files (@Daddy Files)1540254058.0

When Gouveia's wife picked Sam up from school, he burst into tears, devastated at how kids had responded to his nails.

Only one kid stood up for him.

When Sam called his dad at work, Gouveia reassured him that his nails were "BADASS!" and that the only thing that mattered was whether he likes them. Then Sam said something that broke his dad's heart: "Daddy, I want mommy to take off the nail polish so they don't make fun of me."

This is one of those moments as a parent that destroys you, when you feel torn between wanting your child to not face any more suffering, but also teach them to stand up for themselves and for what's right.

Gouveia was clear on how wrong this experience was for his son, and who was ultimately responsible for it: parents.

I know these kids are only in kindergarten but this toxic masculinity bullshit is LEARNED. Learned most of the time… https://t.co/faQREXnS4v
— Daddy Files (@Daddy Files)1540254148.0

We teach our kids what's right and wrong, what's kind and cruel. And we teach them what it means when someone does something we consider "different."

My wife and I spent five years successfully preaching tolerance, acceptance, and the importance of expression and y… https://t.co/4H6ykxjmOS
— Daddy Files (@Daddy Files)1540254178.0

But Gouveia encouraged his son to be himself and to show those kids that nail polish can be awesome on anyone.

I can feel the Papa Bear—and the aware male in a toxic society—in Gouveia's tweets. How refreshing to see a man dad of three sons take on the "restrictive bullshit that's been choking boys forever" and teaching them a different way.

Gorveia pointed out that lots of guys wear nail polish, even some of Sam's heroes like Thor and Capt. Jack Sparrow. But he told him that, more importantly, it didn't matter what anyone else does.

But more importantly I told him it doesn’t matter what anyone else does because what you wear and how you look shou… https://t.co/OkKrqWtp6h
— Daddy Files (@Daddy Files)1540254256.0

Sam decided to keep wearing his nail polish, and the better side of Twitter rallied right behind him.

The best part of this story is people's responses to it. No 5-year-old should be bullied for any reason, but the fact that a boy is bullied for something seen as feminine is a problem in and of itself.

Thankfully, the internet showed Sam that he was not alone.

First, Sam's dad and brother showed their support by painting their own nails.

Then the supportive tweets started rolling in. The best one may have been from NFL player Martellus Bennett:

@MartysaurusRex Hey man, huge fan here. Thanks for being a voice for involved dads and those pink nails are 🔥!
— Daddy Files (@Daddy Files)1540261448.0

Nail polish brand OPI offered to send Sam some nail polish so he could show off his unique style:

And someone created an initiative to get all of Sam's town of Franklin, Massachusetts to paint their nails on Friday in solidarity with Sam.

Some beautiful, wonderful person made this and apparently everyone is going to paint their nails in Sam's town on F… https://t.co/3bIak3AfMb
— Daddy Files (@Daddy Files)1540322367.0

Kudos to this dad for helping his sons reject outdated notions of masculinity and kudos to the good people of Twitter for restoring our faith in humanity.