Her grandma left her a voicemail before she died. Now, this tattoo lets her hear it. 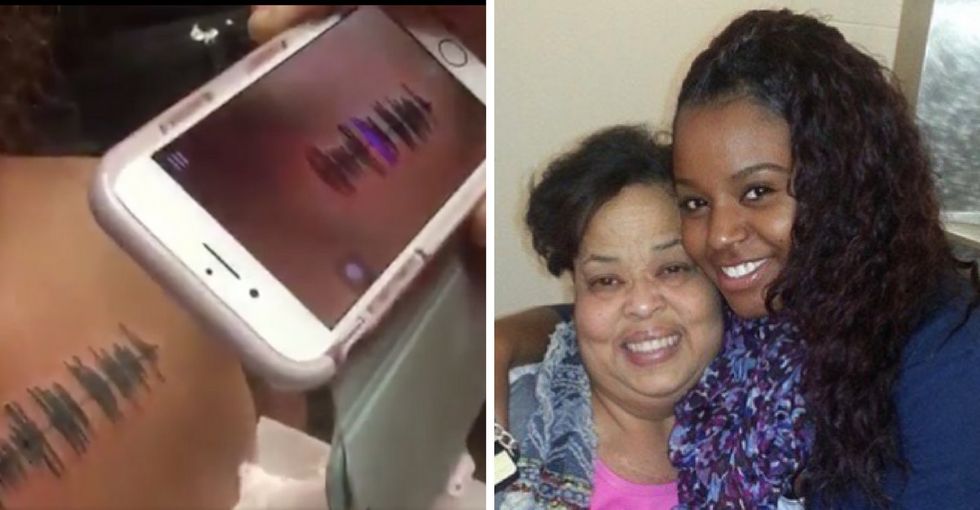 About three years ago, Sakyrah Morris' grandma left her a voicemail wishing her a happy birthday at midnight. For some reason, Morris held onto it.

Good thing she did. A month later, her grandmother passed away: "Words can’t explain how much I miss her."

Morris, a junior in high school at the time, was deeply affected by the loss — though she was relieved to know she could still listen to her grandmother's voice any time she wanted.

"I’ve been holding on to this voicemail for almost three years now, not knowing what I would do with it," she expressed on Instagram.

The now-19-year-old knew she wanted to do something with her grandma's voicemail to keep her memory alive.

So she got a tattoo. A very unique one.

Morris decided to get an inked design that allows her to hear her grandma's "happy birthday" voicemail whenever she wants.

"Today I got that exact waveform [from the voicemail] tattooed across my heart," Morris wrote on Twitter along with a video showing how it works. "I am able to play it just by holding my camera over it."

The technology involved might seem near-miraculous, but it's actually pretty simple. The app Skin Motion, which Morris used for her tattoo, can scan an image and play a stored audio file that matches the visual. The app isn't reading sound waves tattooed on Morris' skin, as many Twitter users pointed out. Instead, it's recognizing that graphic of the tattoo and then playing back the audio associated with it. (Think of it like reading a QR code.)

Regardless of the technology involved in memorializing her grandma in such a powerful way, the tattoo means she'll stay with Morris for a lifetime.

"I just want to take this time to thank my grandma, my everything," Morris wrote after her tattoo and video went viral.

"Every blessing that is being sent my way right now is because of her. I know that she orchestrated all of this for me. I will do nothing but continue to make her proud." ❤️