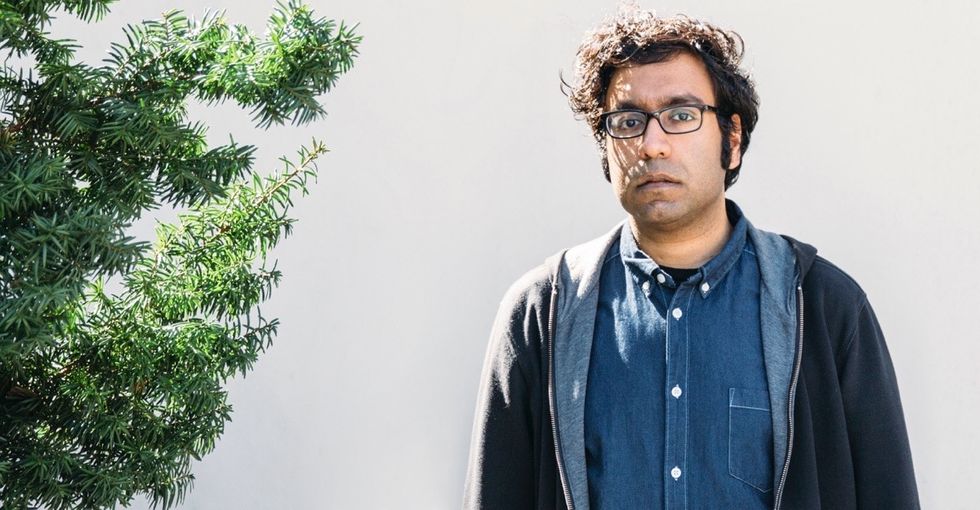 If you've been anywhere near a TV in the last three decades or so, it's likely that you've seen an episode or two of "The Simpsons." Whether you're a fan or casual observer, you're no doubt familiar with Kwik-E-Mart clerk and Indian immigrant Apu Nahasapeemapetilon (voiced by Hank Azaria).

Comedian Hari Kondabolu is a longtime fan of "The Simpsons." But he has a bone to pick with Apu, whose one-dimensional, hackneyed stereotype of Indian immigrants has antagonized his personal and professional lives since he was a child.

In his new documentary, "The Problem With Apu," Kondabolu lays out a case against the cliché-driven character and tries to chart a path forward for better, more accurate representation in the media.

Apu isn't an especially accurate portrayal of an Indian immigrant, relying on tired tropes and offensive stereotypes. GIF from "The Simpsons"/YouTube.

To start, it's a problem that extends far beyond Kondabolu himself. Early in the documentary, Kondabolu assembles a group of other Indian and South Asian actors and comics and asks how many have ever been called "Apu" as an insult. Every single person raises a hand.

For example, many of the actors mentioned being expected to more or less mimic Apu's voice (unaffectionately called "patanking"), something Kondabolu describes as being like "a white guy doing an impression of a white guy making fun of [his] father."

Audiences then only hear Indian and South Asian actors talking with the same accent, when in reality there are hundreds of different dialects, accents, and languages among people actually living in India. As it turns out, there's far more cultural and linguistic diversity in a country of more than 1.3 billion people than pop culture gives them credit for.

"If you're a South Asian-American and you dream of being an actor, your choices are pretty limited," Kondabolu says in the documentary.

"You either portray your community as one-dimensional with hopes of better work, or you let somebody else do it," he says, referencing Hollywood's unfortunate history of casting white actors to play Indian roles."It begs the question: Is it better to be clowned or to clown yourself?"

"'The Simpsons' stereotypes all races," Ambudkar says in the film. "The problem is we didn't have any other representation."

This is precisely why the "equal opportunity offender" argument so often falls flat. Sure, a character like Homer Simpson is a dopey representation of a white (though he's technically yellow) middle-class father and husband.

Because Homer is far from the only example of white middle-class fathers and husbands we see in the media, in real life, and in the 1,000-plus character universe of "The Simpsons," however, his portrayal doesn't come with as much of a sting as Apu's does as one of few Indian characters that audiences see on screen.

Kondabolu has always hated the "equal opportunity offense" excuse, he says in a phone interview, especially when it's being used to defend stereotypical characters. "Equal opportunities" don't exist in real life, he explains. "Whether that's economically, whether that's in terms of education, or whether it's just in terms of representation," he says.

"If you only have a handful of images, and that's what defines a large group of people," he adds, "then each time you have a negative image or you go after that particular group, that's a big thing."

Stereotypical characters like Apu are influential offscreen, and that's the really big problem.

"The media ends up shaping our perceptions, and to pretend it doesn't is foolish," Kondabolu says, responding to the common argument that viewers can tell the difference between fictional portrayals and reality. "The idea that the media shapes us is the fundamental aspect of advertising. ... So if we're saying that's not true, then why do we buy things based on commercials? Why do people spend millions of dollars trying to influence us? Clearly there's impact."

"If you only have a handful of images, and that's what defines a large group of people, then each time you have a negative image or you go after that particular group, that's a big thing." — Hari Kondabolu

When you take that principle and apply it to how people of different races are portrayed in the media, the results can be deadly. As an example, Kondabolu points to media portrayals of black men as violent or predatory, touching on how the media we consume contributes to unconscious bias.

"Let's say if you're a cop, you're scared, you have a gun, and you see a black man in front of you. You don't know exactly who this person is, you're going to go back to that muscle memory shaped from years of being told by your peers, by your parents, and by the media that this person is a threat."

Is Kondabolu just a big liberal snowflake? Only if you ignore what he actually has to say. Image from "The Problem With Apu"/YouTube.

The best way to fight inaccurate portrayals is to fight for more authentic representation in media — and progress is being made.

In recent years, the number of Indian-American actors landing breakthrough roles has seen a big boost with the likes of Penn, Jaffrey, and Ansari all landing spots on critically acclaimed shows as well as people such as Mindy Kaling, Aasif Mandvi, and Kondabolu finding major success too. That's just a drop in the bucket, according to Kondabolu, who calls on creatives from marginalized groups to tell their stories, whether funded or not.

"We just have to control our stories to the best of our ability," he says, urging writers and actors to "present the counter-argument" for a more clear and accurate portrayal. "That part's on us. I think that we need to call out portrayals when they are inaccurate, when they are homophobic, when they are transphobic, when they're racist and sexist, and when there's fundamental things about them that are not true about an experience."

"When I see [Apu on screen], it's like, 'Oh, this is how they see us,'" Kondabolu laments. "I think it's important to call those things out."

The question of what to do with the character of Apu is a gateway to a much larger conversation.

Throughout the film, Kondabolu tries to land an on-camera interview with Azaria to discuss the character — not to yell at him or tell him that he's wrong for giving voice to something he finds so personally grating, but to find a mutual understanding of different experiences.

Hank Azaria voices Apu and a number of other Simpsons characters. Photo by Matt Winkelmeyer/Getty Images.

He hopes that his documentary can serve as an entry point to those harder conversations that seem doubly difficult in the current political landscape.

"I just want us talking to each other," Kondabolu says, his voice tinged with cautious optimism. "If this leads us to have longer conversations from this very simple point forward, that's what's important. We don't listen to each other, we don't talk to each other. One hope I had by interviewing Hank Azaria was that we could show people that this is how you can talk through something that might be awkward. This is how adults behave. This is how we can actually deal with things."

Watch the trailer for "The Problem With Apu" below.