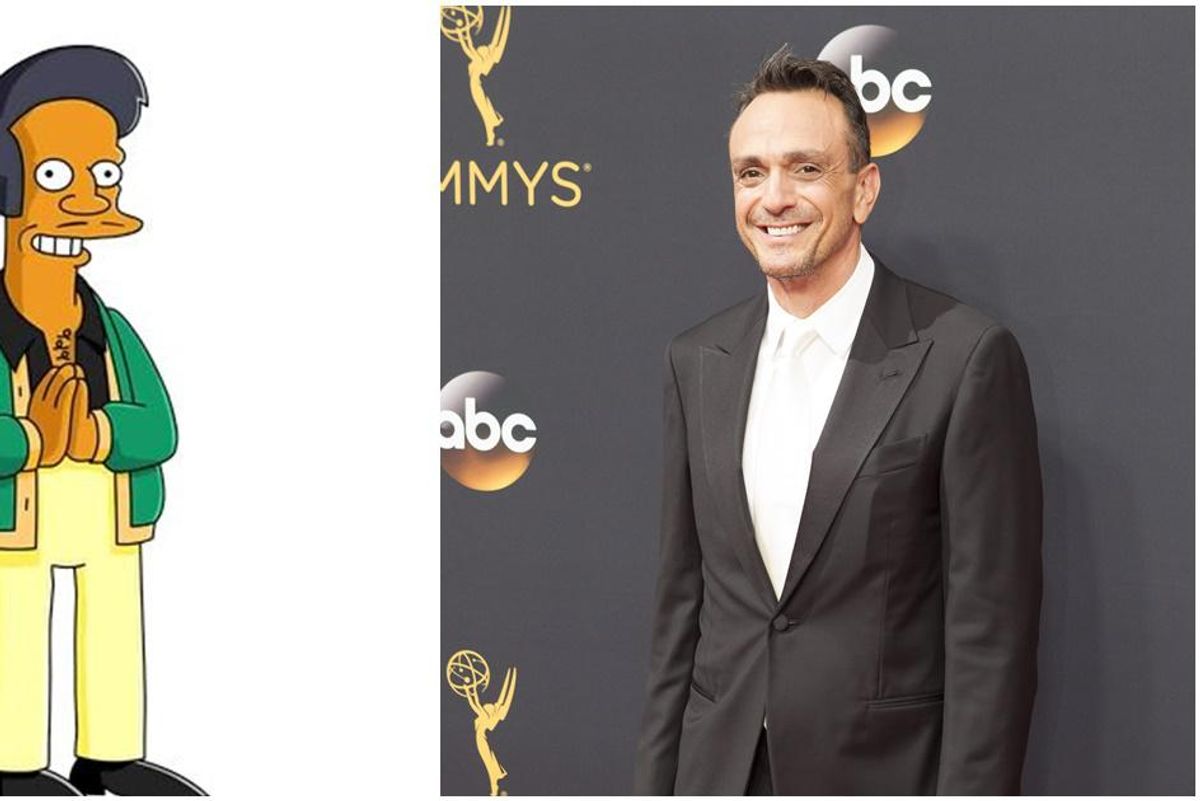 via Walt Disney Television / Flickr and The Simpsons Wiki

Actor Hank Azaria's relationship with "The Simpsons" character Apu Nahasapeemapetilon holds a mirror up to how America has progressed as a society on the issue of race over the past three decades. Last year, he announced he'd no longer be performing the character, but that came after a long, slow journey of understanding.

"It's 1988, and somebody says to me, 'Hey, can you do an Indian accent?' It was, like, one line. I said, 'Yeah, I think so.' And Apu comes out. We're like 'OK, that was funny' and we all laugh. So that keeps going from there, and over the years it develops," he revealed on Dax Shepard and Monica Padman's "Armchair Expert" podcast.

"When I saw that movie, there was no difference between how funny Peter Sellers is as a French guy [in "The Pink Panther" movies] or a German guy in "Dr. Strangelove" or as Hrundi V. Bakshi in "The Party," he said. "It's just funny. I'm an aspiring voice guy, and I can do the accent, so there's no difference to me either. What I'm not realizing, of course, is that I can feel that way as a white guy, because I'm not living with the consequences of those things at all."

However, there is a difference between when a white actor does a cartoonish voice of someone European versus a South Asian. At the time, Apu was little more than a vehicle for stereotypical jokes.

Sure, "The Simpsons" had plenty of other stereotypes on the show, whether its Groundskeeper Willie the Scotsman or Cletus the Slack-Jawed Yokel.

However, Forbes explains there is a clear difference:

"Apu was one of the few Indian American characters on tv at the time 'The Simpsons' aired, and was way more influential than any animated side-character should ever be. Thus, his portrayal should have been more sensitive, especially considering that the character's dodgy accent and Kwik-E-Mart catchphrase has been used as a racial slur against folks of Indian heritage for decades."

At first, Azaria thought the criticism was a slippery slope that was dangerous to even consider.

"My first defense was, 'Should I stop doing Cletus as a Southern guy, or Luigi who is an Italian guy?' Where does it end, right?" the actor said. "I even hear the argument: 'Do you have to be a bartender to play Moe?' And 'You're not a cop, so you shouldn't play Wiggum.' I mean, that's just ridiculous."

Azaria realized that it was time to stop being defensive and to listen to what people in the South Asian community were saying after watching Hari Kondabolu's 2017 documentary, "The Problem With Apu." This kicked off a three-year learning process where he attended seminars and spoke with many Indian-American colleagues.

One notable moment was when a 17-year-old broke down in tears while explaining the power that Hollywood has to shape perceptions of his community.

"With tears in his eyes, he said to me, 'Will you please tell the writers in Hollywood that what they do and what they come up with really matters in people's lives, and it has consequences?' I was like, 'Yes, my friend — I will tell them that,'" Azaria admitted.

He attributes his ability to listen to the work he's done in Alcoholics Anonymous.

"I needed to shut up ... and listen and learn. And that took a while. This was not a two-week process: I needed to educate myself a lot. If I had not gotten sober, I promise you it wouldn't have taken much wine for me to be in my feelings one night and fire off a Tweet that I felt justified in firing off," he said. "Some kind of defensive, white-fragile tweet. Boy, was I glad I had a system in place where I could look at this thing."

Azaria also believes that white actors should also stop playing other ethnicities due to the lack of work in Hollywood for people of color.

"Here's the thing: if it's a character of color in particular, there's not the same level of opportunity there. So if it's an Indian character or a Latinx character or a Black character, please let's have that person voice the character," he said. "It's more authentic, they'll bring their experience of their culturalization to it, and let's not take jobs away from people who don't have enough."

The actor apologized to the show's host, Padman, the daughter of Indian immigrants for any harm the character might have caused them.

"I know you weren't asking for that, but it's important. I apologize for my part in creating that and participating in that," he said. "Part of me feels like I need to go around to every single Indian person in this country and personally apologize. And sometimes I do when it comes up."

Azaria's journey to understanding may have taken a few decades too long, but it's a great example of how we can help people learn about social justice without having to use the ham-fisted tactics of cancel culture.

People can change when given the opportunity. Azaria is the perfect example of someone who has gone from doing work that harmed a community to someone who has become an advocate for expanding the characterizations and opportunities for people of color in entertainment.

From Your Site Articles
Related Articles Around the Web
inclusivity
Heroes