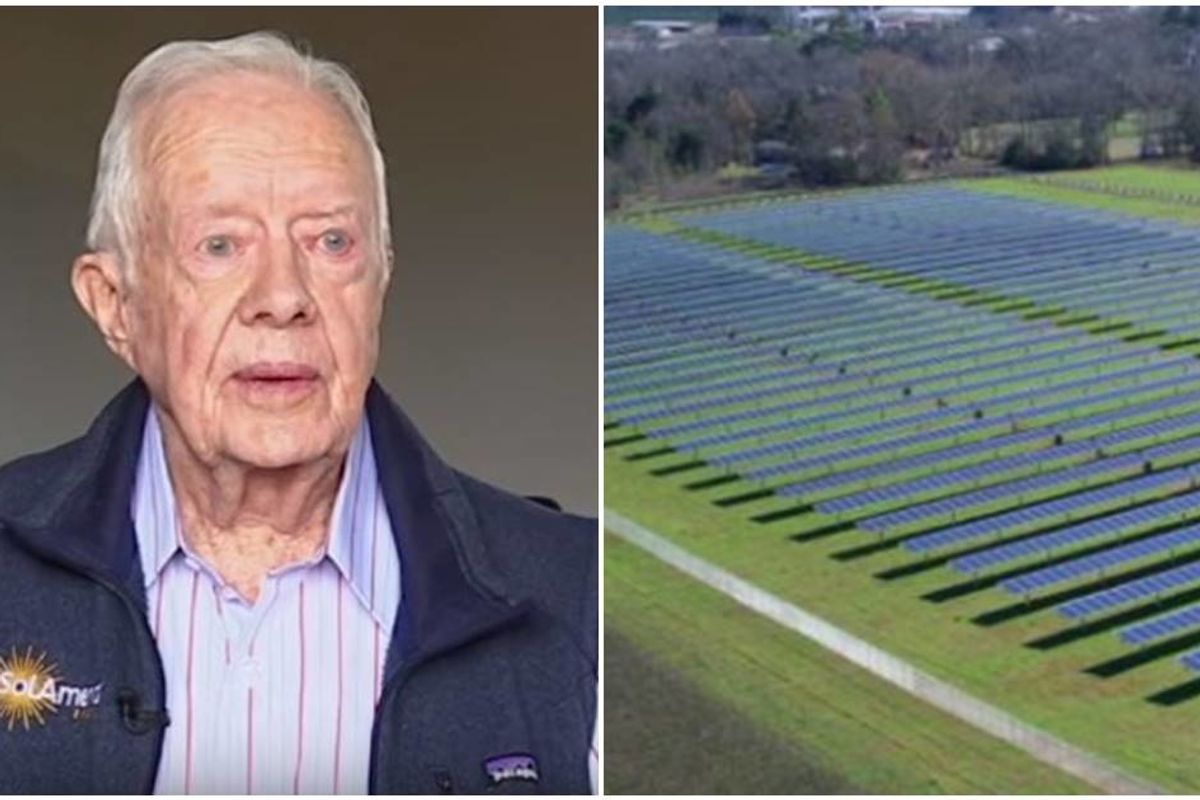 Jimmy Carter was way ahead of the rest of America when he put solar panels on the White House. On June 20, 1979, he made a proud proclamation:

In the year 2000 this solar water heater behind me, which is being dedicated today, will still be here supplying cheap, efficient energy…. A generation from now, this solar heater can either be a curiosity, a museum piece, an example of a road not taken or it can be just a small part of one of the greatest and most exciting adventures ever undertaken by the American people.

The 32-panel system was designed to heat water throughout the presidential residence.

"President Carter saw [solar] as a really valid energy resource, and he understood it. I mean, it is a domestic resource and it is huge," Fred Morse, director of Carter's solar energy program, told Scientific American.

"It was the symbolism of the president wanting to bring solar energy immediately into his administration," he continued.

Unfortunately, Ronald Reagan, who was no fan of alternative energy took the panels down form the White House when he took office a few years later.

RELATED: Four more years! The case for Jimmy Carter in 2020.

Carter was right about two things he said in that dedication. First, his panels are currently on display at The Smithsonian Institute, the Carter Library, and the Solar Science and Technology Museum in Dezhou, China.

Second, renewable energy has become one of the most important American endeavors of the new millennium.

There's no doubt that President Carter was way ahead of his time.

Carter has always been a man of action, evidenced by his hands-on approach to building homes with Habitat for Humanity. So in 2017, he leased ten acres of land near his home in Plains, Georgia, to be used as a solar farm with 3,852 panels.

The 94-year-old Carter still lives in his hometown of Plains with his wife in a two-bedroom home that's assessed at about $167,000.

The system is state-of-the-art with panels that turn towards the sun throughout the day so they generate the maximum amount of power.

"Distributed, clean energy generation is critical to meeting growing energy needs around the world while fighting the effects of climate change," Carter said in a SolAmerica press release. "I am encouraged by the tremendous progress that solar and other clean energy solutions have made in recent years and expect those trends to continue."

"There remains a great deal of untapped potential in renewable energy in Georgia and elsewhere in the U.S. We believe distributed solar projects like the Plains project will play a big role in fueling the energy needs of generations to come," SolAmerica executive vice president George Mori said in a statement.