Even this Confederate general thought monuments were a bad idea. His reasons make sense.

He thought they would continue to divide the country. He was right. 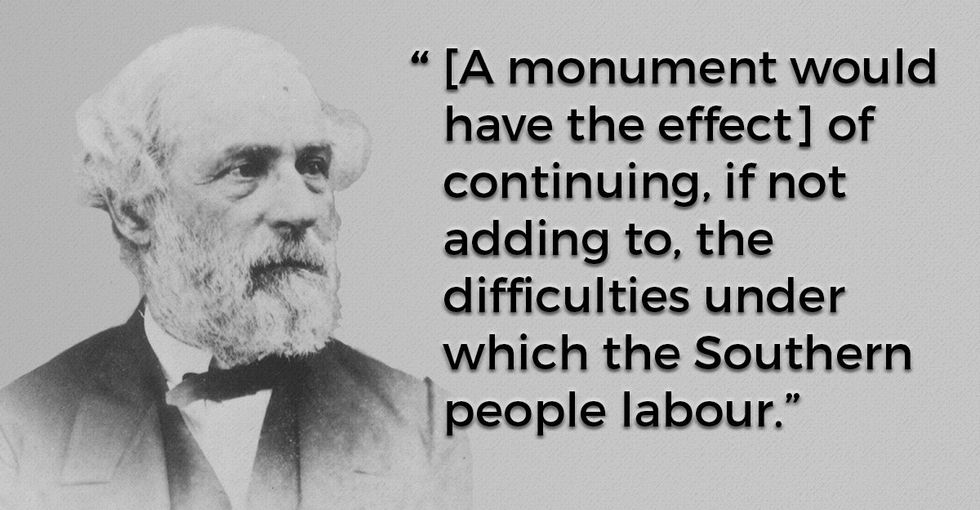 On Aug. 17, Donald Trump started the day as only he could: with a full-throated defense of the Confederacy.

Responding to renewed calls to remove Confederate monuments around the country, Trump decried action, defending them on aesthetic (yes, the man who plates everything in gold and slaps his name on it has thoughts on style) and historical grounds. Sigh.

Sad to see the history and culture of our great country being ripped apart with the removal of our beautiful statues and monuments. You.....
— Donald J. Trump (@Donald J. Trump)1502975248.0

...the beauty that is being taken out of our cities, towns and parks will be greatly missed and never able to be comparably replaced!
— Donald J. Trump (@Donald J. Trump)1502976105.0

While Trump might not take advice from those in the #FakeNewsMedia, there's one person he should hear on this issue: Robert E. Lee.

As it turns out, he had some thoughts on whether these monuments should be built in the first place. In short, he was against it.

In a December 1868 letter, Lee addressed a proposal to build a monument in his honor:

"As regards the erection of such a monument as is contemplated; my conviction is, that however grateful it would be to the feelings of the South, the attempt in the present condition of the Country, would have the effect of retarding, instead of accelerating its accomplishment; & of continuing, if not adding to, the difficulties under which the Southern people labour. All I think that can now be done, is to aid our noble & generous women in their efforts to protect the graves & mark the last resting places of those who have fallen, & wait for better times."

In other words, monuments celebrating the Confederacy would only serve to further divide the newly-united United States and slow down any progress that had been made. Given that we're still arguing about monuments and flags more than 150 years since the war ended, Lee seems to have been absolutely right.

We don't need monuments celebrating the Confederacy to remember the Civil War, and nobody is erasing history by suggesting they be removed.

Some may argue that monuments glorifying Confederate soldiers are necessary if we want to avoid making the same mistakes and going to war with ourselves once again. That simply doesn't make sense.

Germany has managed to remember the Nazis without erecting statues of Hitler throughout the country. In fact, the country made a concentrated effort to eliminate anything that could become the center of a neo-Nazi pilgrimage. They went so far as to turn the place where Hitler died into a parking lot.

Moreover, it's worth noting that the monuments themselves are not historical artifacts. Many are relatively recent creations. In fact, 32 Confederate monuments in the U.S. were build in just the past 17 years, several of which were in Union states. Going back further, many of these monuments were built as anti-black backlash to the civil rights movement. The same goes for Southern affinity toward the Confederate battle flag, which only rose in the 1950s and 1960s, again, in protest of the civil rights movement.

Confederate monuments and the Confederate flag have less to do with the actual Civil War and much more to do with opposition to civil rights.

A 1969 photo of the carving at Stone Mountain, featuring Jefferson Davis, Robert E Lee, and Stonewall Jackson. Stone Mountain was the birthplace of the second Ku Klux Klan in 1915. The carving wasn't completed until 1972. Photo by Fox Photos/Getty Images.

If the goal truly is to avoid another Civil War, the answer isn't to pepper the country with statues, but to stop teaching a sanitized version of history.

The Civil War was fought over slavery. Period.

Take it from Confederate Vice President Alexander H. Stephens, who in March 1861, said slavery and "the proper status of the negro in our form of civilization" was "the immediate cause of the late rupture and present revolution," referring to the war. He added, "[T]he negro is not equal to the white man; that slavery, subordination to the superior race is his natural and normal condition."

It seems straightforward, and yet a 2015 Marist poll found that just 53% of Americans agree that slavery was the driving force behind the Civil War, with 41% disagreeing with that statement. Some may argue that it was really about "states' rights," but "states' rights" to do what exactly? To own slaves.

We do need to stop sanitizing our history, and that must begin with acknowledging that our country has an ugly past. Lee doesn't need your monuments, and he will never, ever be forgotten.

Let’s put this argument to rest and commit to better education, not ahistorical glorification.