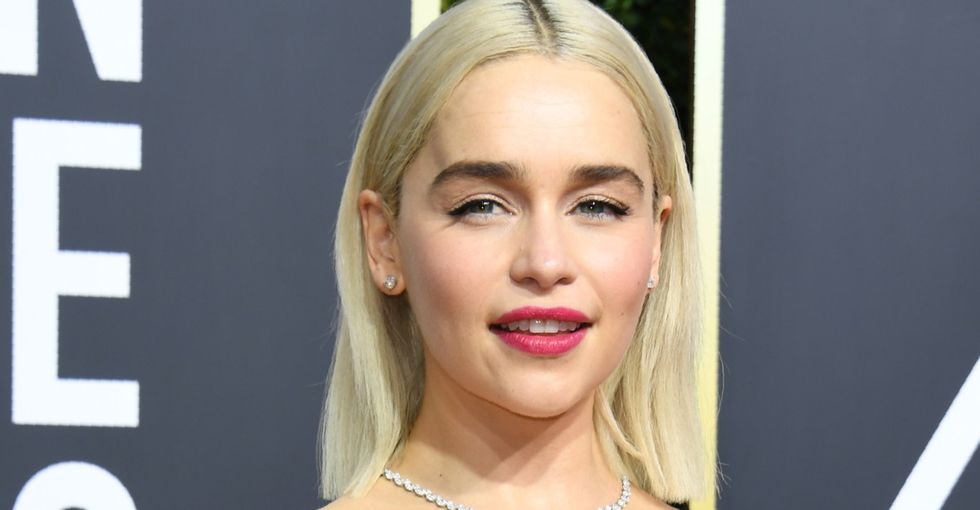 Let's be real: Daenerys Targaryen is the best character on "Game of Thrones."

She's walked through fire. She's the mother of dragons. She inspires undying loyalty in others. And most of all: She's not afraid to take charge when she needs to. (Did I mention the dragons?)

A character who can literally call upon the power of scaly, fire-breathing helpers at any time ain't someone to mess with. Oh, and she's kind too!

Photo via "Game of Thrones"/HBO.

Daenerys is a total BAMF — but don't call her a "strong female character."

She's much more than that. She's brave; she's honorable; she's venerated; she doesn't give up. And Emilia Clarke, the actor who plays her, wants everyone to stop viewing female characters in a "weak/strong" binary.

"Take the 'strong' out of it. Find another adjective, dammit. I'm just playing women," Clarke said. "If it’s not strong, what is it? Are you telling me there’s another option, that there’s a weak option? You think a lead in a movie is going to be a weak woman?"

Clarke went on to point out that such questions aren't posed to male actors, whose characters' are thought of as strong regardless of whether they're toting rocket launchers through the tundra or fighting emotional demons. You'd find it weird if Netflix had a category for "Strong Male Leads," so why is the opposite OK?

Clarke's right. And she's not alone.

The "strong female character" descriptor is being taken to task in Hollywood. After decades of being seen as a compliment, more and more actors, producers, and directors are making it clear that explicitly stating a female character is strong is making the assumption that other female characters, and women in general, somehow aren't.

In early 2018, Shonda Rhimes got real about the fact that "women are women." Stop with the compartmentalizing.

"There are no Dumb Weak Women," she wrote. "A smart strong woman is just a WOMAN. Also? 'Women' are not a TV trend — we're half the planet."

Academy Award nominee Jessica Chastain quickly backed her up, pointing out that she's often told to go for "strong characters" when the reality is that Hollywood should be focused on "well written women" instead.

Clarke also has some ideas for better questions to ask.

"'What does it feel like to play someone with power?' or 'How does it feel to play a female lead in a big blockbuster movie?'" Clarke suggested. These types of questions are far more interesting anyway.

The questions asked in interviews affect the way women, and women characters are seen. Viewing women only in the context of "strong or weak" perpetuates the idea that these are the only ways to describe them. Reporters aren't the only ones who need to be more aware that female characters should be conceptualized outside their gender. We've got to do better.