Danes have the best work-life balance in the world thanks to these 3 important beliefs. 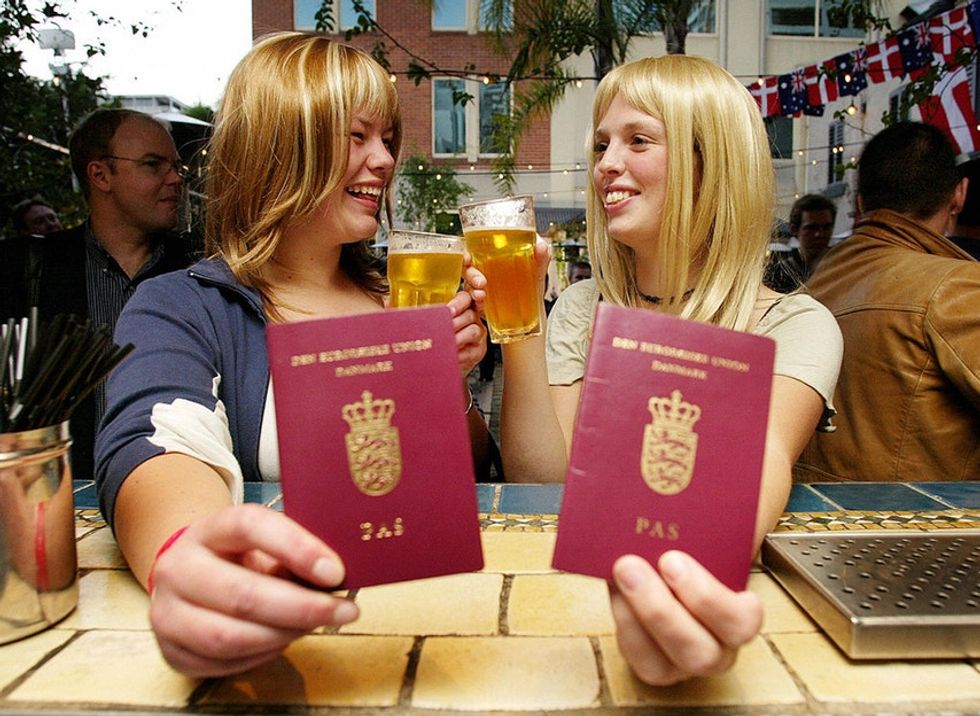 This article originally appeared on November 23, 2016

By the end of her first week living in Denmark, Helen Russell was worried about her husband's brand-new job.

She explained in an article she wrote for Stylist that she was sure Lego had fired him already because he kept coming home early.

Originally from the U.K., Russell was used to her home country's work customs, where late nights and long hours were worn as a badge of honor. She felt surprised and embarrassed when her husband first came home from work in the early afternoon — she'd hardly started her own day of freelance writing.

The trend continued, she said, and by Friday, her husband was strolling through the door as early as 2:30 p.m. But it wasn't a reflection of his work ethic. It turns out, in Denmark, working fewer hours is ... just what people do.

This healthy work-life balance is such a crucial part of Danish culture that they even boast about it on the country's official website.

It's a major point of pride for Denmark, which has a reputation for being the happiest country in the world. The government encourages a 37-hour workweek, a designated lunch break, a minimum five weeks of paid vacation, extended and paid parental leave, and flexible schedules with the option to work from home as well as incentives for child care. On average, Danes spend less than one-third of their time working — and yet, they're still more productive than most of the European Union or the United States.

You might be thinking, "What's the catch?" But the truth is that Danish values and national attitudes are behind the country's commitment to work-life balance.

1. Workers in Denmark are trusted to deliver on whatever their job is.

By and large, people want to work. They want to do a good job. But many people wrongly assume that others are inherentlylazy, that work is a reflection of our moral values, and that time equals productivity. (But, in fact, a lot of jobs that exist today aren't even measurably productive.)

So what if, instead of finding ways to pass the time until the clock hits 5 p.m., we just did what we had to do for work and then called it a day? What if you were actually empowered to take personal responsibility into your own hands rather than relying on the threats of a manager lurking in the corner making sure you put in the physical time at a desk?

That's what Denmark does. As Russell writes that one of her Danish friends explained to her, "Come Cinderella hour — home time — everyone from the receptionist to the CEO goes. We're trusted to do a good job; do our work; then leave." Maybe that's how they get so much stuff done?

2. Family is obviously important, but in Danish culture, people are actually encouraged to value their families — and everyone else respects it.

According to Russell's experience, it's totally normal for people in Denmark to list their child care pickups and other family business in their digital calendars for others to see. There shouldn't be any shame in prioritizing family. (And if you don't have a family? You deserve the same freedom.) Also in Denmark, child care is tax-deductible, and the state provides maid services and pensions for the elderly.

This emphasis on family extends to the country's educational approach as well. Rather than using an exam-based schooling system, Denmark is "hugely child-centered and this leads to well-rounded and enthusiastic children," according to teacher Stephanie Lambert, another transplant from Britain.

The country's focus on fewer working hours frees up educators to invest in the personalized needs of students as individuals rather than stressing about uniform success. And as a result, Danish children have these same values instilled in them from a young age. It's ingrained in them by the time they join the workforce, and they'll pass these same values down.

3. Danes also recognize work and play shouldn't be at odds with one another. Everyone benefits from a little R and R — workers and bosses.

More work means more stress, which means more health problems and less getting done. Maybe that's one reason why the Danes spend so much less on health care?

Studies have shown vacations make our brains more creative, which is why vacation days should not be treated as some rare commodity, hoarded like gold for some far-future payoff, or used to cover for other personal matters. People in Denmark receive a minimum five weeks of paid vacation time, and they actually use it — without any fear of shame or social stigma.

It's a simple truth that many Danes recognize, from day laborers to high-end executives: Happier workers are better workers. "We think everyone has a right to be respected, from a CEO to a janitor," Danish psychotherapist Iben Sandahl told The Local. "We try to teach our children to focus on the good in themselves and others rather than on status or labels."

Denmark's model of work-life balance is proof that time is not the same as productivity, and treating people well is actually better for everyone.

Granted, there are some people who think the Danish secret to happiness is actually just lowered expectations. Yet, being humble, realistic, and appreciative isn't such a bad thing.

Either way, the Danes have proven a healthy moderation of labor and leisure is not only possible, but it's measurably preferable to forcing people to live to work and work themselves to death. Maybe it's time the rest of us followed their example.

From Your Site Articles
Identity