A Christian man got a real Bible lesson after asking if she should exclude his kids from gay sister's wedding. 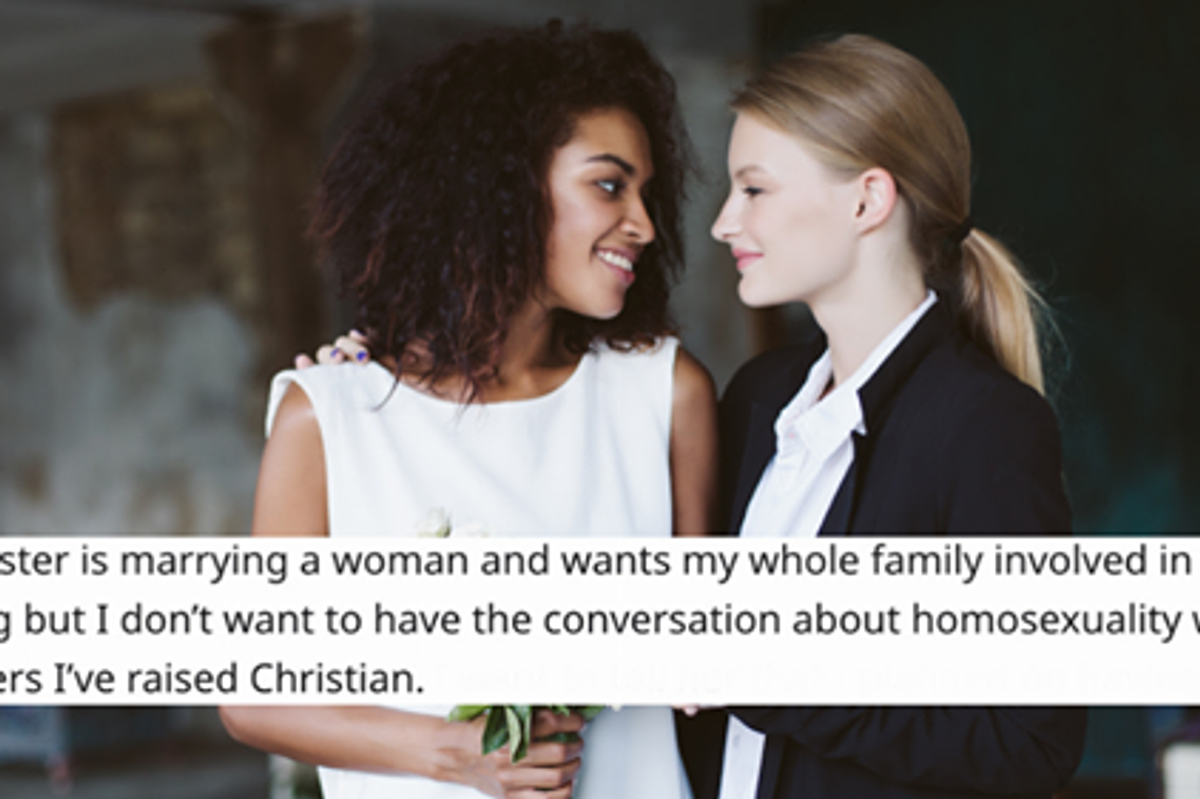 Not all religions are homophobic, but a sizable number of religious people still abide by homophobic interpretations of their text of choice. Having a devotion to that text, while still navigating a world full of diverse people you love can create some fairly clear contradictions. For example, if you love her sister and she's gay, then the logical step for most people would be to support that relationship and stand up for your sister's rights.

However, for someone who genuinely believes the Bible prohibits and discourages LGBTQ relationships, then a certain level of cognitive dissonance arises.

In a recent post on the subreddit Am I The Asshole a man asked if he's an asshole for not wanting his daughters to be in his sister's "gay wedding."

"AITA for not wanting my young daughters in my sister's gay wedding?"

"Throwaway for pretty clear reason.
I am a brother to a pretty awesome little sister (24) and also a dad of three beautiful little girls (2, 5, 9). My sister dated men throughout her teenage years and I'd always assumed that's how it'd stay. However she is now engaged to be married to a woman. Her soon to be wife is a really cool person and my own wife and I have enjoyed having her over and the kids enjoy her company. We haven't told them they are dating."

OP kicked off the post by clarifying that him and his wife really do enjoy his sister's fiance, but they haven't told the kids the women are romantically involved.

"My sister came to me recently as the wedding planning has begun and she wants my wife and I in the wedding party and also wants our oldest daughter as a bridesmaid with the two younger ones as flower girls."

OP's sister recently told him she wants him and his wife in the wedding party, as well as their three daughters.

"Here is my dilemma.. I have a very Christian family. My wife and I take our girls to church every Sunday and to me, homosexuality isn't in gods word. I feel that having my daughters go to church and then be a part of a gay wedding is only going to create confusion and questions for them. I have yet to discuss this with my wife. It's not that I intended for any of our family to miss my sisters wedding, but I hadn't even thought that far up until she told me she wants us to be a part of it."

While he fully intends on attending the wedding, OP wrote that he feels uncomfortable having the kids in the wedding since he hasn't told them their aunt is gay yet, and "homosexuality isn't in God's word."

"I spoke with our mother who is completely against the wedding happening at all. She says I should tell her no, in hopes she won't go through with the wedding. That's fucked up and I told her absolutely not. Like I said previously, I never made plans to not attend the wedding. I was hoping to maybe have the girls be babysat but I also struggle with that as they adore their aunt. Now that she wants them in the wedding, I can't get a babysitter and decline her offer. That would break her heart."

OP's mom doesn't support the wedding at all, and thinks he should tell her no in hopes it'll cause her to cancel the wedding.

While OP has no plans on doing that, he still doesn't want to have a conversation about gay marriage with his children.

"But again this wasn't a conversation I wanted to have with my girls. I don't want to give them the wrong idea.
I'm so torn here. WIBTA to tell my sister I don't want the trouble of small kids at her wedding even though it's a lie?"

Now, OP is considering avoiding telling the truth to both his sister and daughters by creating a lie about not wanting small children at the wedding.

"TLDR: sister is marrying a woman and wants my whole family involved in the wedding but I don't want to have the conversation about homosexuality with the daughters I've raised Christian. I want to tell her that I planned on having them babysat as I don't like bringing them to weddings despite it being a lie."

Since he feels generally conflicted all around, OP brought the situation to people on the internet, most of whom think he's an asshole for lying about his sister's sexuality.

Rabid-Sqrl got straight to the point with their assessment of the situation.

"YTA. Don't teach your kids to treat gays differently, no matter how your pastor interprets the Bible.
"Be careful who you hate, it could turn out to be someone you love"

Wuellig pointed out how the Bible itself doesn't actually condemn LGBTQ relationships, so OP's supposed excuse of faith doesn't even properly apply.

"YTA Not ignoring the irony of "should I bear false witness because I'm too Christian to be okay with the gays?" to begin with. Secondly, lots of passages in the bible often used to justify the viewpoint you espouse here don't hold up to scrutiny when considered in the larger context of the stories they are within. If you're on a journey of discovery, please take time to consider the points raised in the article and video here. https://www.upworthy.com/homosexuality-in-the-bible-here-s-what-six-passages-say-and-how-to-interpret-them"

Songofwaterandheat pointed out that no Christian follows the Bible perfectly, so why pretend to now?

"YWBTA. Let's not pretend you follow every one of "God's" words. You can ignore this one for one evening too.
You may want to find a more tolerant church."

AnimalLover38 gave OP advice on how to have the talk with his daughters.

"When ever I see people asking for advice on how to tell their young children about the LGBT+ and such it reminds me of what my parents said I asked about after they gave lil' ol' 5 yr old me that talk."
"They explained how sometimes a man loves a man and a woman loves a woman just like they love each other, and that's ok, there's nothing wrong with that."

And that sometimes little boys are born little boys, but they feel like they should have been born as little girls and when they grown up the can get surgery to become girls . And vise versa.
Apperantly I sat there thinking long and hard and finally asked "so does that mean if I feel like I shouldn't have been born as a little girl... I can get surgery?"

My parents had "oh fuck she's only 5" moment and panicked because they thought I was too young to have those thoughts, but being the awesome parents they are they just went "yes, of course you can"

"Um sweetheart, I'm so sorry but doctors can't do that yet, but maybe when you're older they will have the technology to be able to do that! Or maybe you can become a doctor and figure out how to do that yourself!"
I stopped crying and said ok. 12 yrs later and I have no desire to convert to a bunny"

fruskydekke pointed out that children have far less hangups than adults in general, so it shouldn't be that complicated.

"Unless you've already taught your daughters that homosexuality is wrong, which I sincerely hope you have not, they have no preconceived notions. Just dress them up nicely, take them to the wedding, and if they have questions, just tell them that your sister and her girlfriend love each other and are getting married."

"Present it as natural and unremarkable, because, you know, it actually is. Humans can love each other in all gender constellations, and the sooner your daughters learn that, the sooner they can learn to be loving and accepting towards all people. I'm not a Christian, but isn't charity the greatest of all virtues among you lot?"

This article originally appeared on SomeeCards. You can read it here.
From Your Site Articles
Related Articles Around the Web
popular