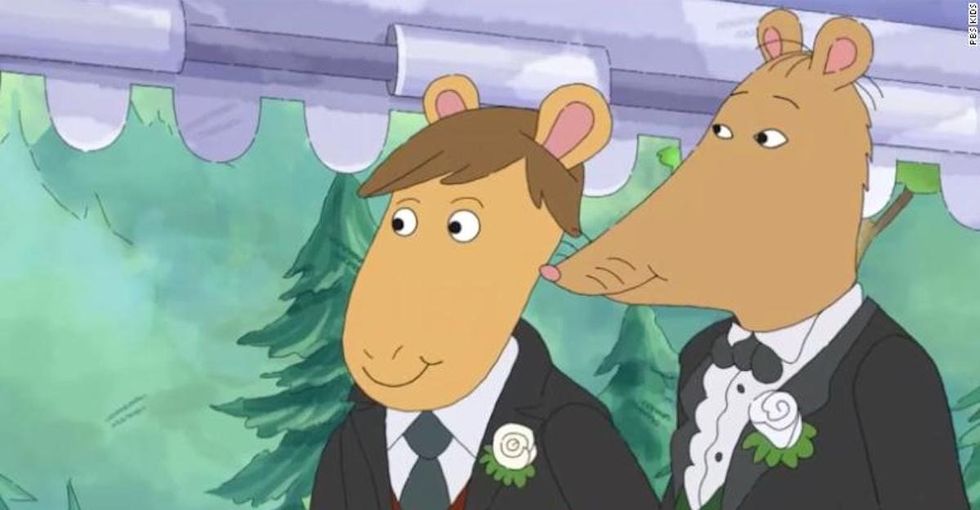 UPDATE: Last week, the world learned that Mr. Ratburn, the shady, big-hearted teacher from "Arthur" was gay. And the world's collective response? "Uh, I didn't even know 'Arthur' was still a thing."

You know what we call that? Progress! Because it's [jubilant swear words bleeped out] awesome that there's more representation on TV and that people are cool with it (although, it's sometimes tiring that you have to celebrate that the high bar of acceptance is "people aren't freaking out about it!")  and that the 58 moms who make up "One Million Mom" aren't out here crying and screeching about the sanctity of traditional marriage. (Or, if they are, we just aren't paying attention to them!) (At least I'm not. You shouldn't be either.)

No story is perfect, however, and, today, Alabama, the great state that once attempted to elect an alleged pedophile to power and just signed "the most stringent abortion law in the nation" (it's being fought hard!) is trying to put its foot down on LGBT+ representation, too.

The state's public television channel is refusing to show the episode, referring to it as a "violation of trust" to air the wedding ep — the central messages of which are: 1. Marry whoever you want as long as they're consenting and kind; 2. Just because a rat is gay doesn't mean he's going to be fabulous on the dance floor.

If you're wondering why that's considered and, I quote again, "a violation of public trust," the short answer is that "the vast majority of parents will not have heard about the content," according to Mike McKenzie, the president of Alabama's Public Television.

“Parents have trusted Alabama Public Television for more than 50 years to provide children’s programs that entertain, educate and inspire,” read a statement from McKenzie.

“More importantly — although we strongly encourage parents to watch television with their children and talk about what they have learned afterwards — parents trust that their children can watch APT without their supervision. We also know that children who are younger than the ‘target’ audience for 'Arthur' also watch the program.”

This is not the first time that Alabama's public television network has pulled an programming featuring gay characters.  In 2005, they pulled an episode of "Postcards From Buster" (an "Arthur spin-off), because the show featured a lesbian couple.

Though some may applaud McKenzie's stance, his argument is really weak and also really ignorant (if not outright bigoted). Homosexuality is not an "adult" concept. The same way that heterosexuality isn't. No one's showing the inner working of the straight parents' relationships on a kid's show and it's not going to happen with gay relationships either.

The only thing this "Arthur" is trying to give voice to? That homosexual people exist and they're no different and deserve no less respect than anyone else. That's only adult in that more of us should be on that same page when we grow up. It's certainly not a breach of trust. Kids can learn gay people exist without adult supervision! They learn about straight people existing literally 24/7 and they're totally fine!

Parents are already contacting the network to protest the episode's omission. Misty Souder, an Alabamian substitute teacher and mom told AL.com that she's using this opportunity to teach her daughter about the importance of standing up for marginalized groups.

“There’s too much going on not to stand up for stuff, even if it’s Arthur," Souder said. "I never thought I’d be going to battle for a gay rat wedding, but here we are.”

This is only the first sentence of my post and you can probably feel that I'm a little annoyed. A little miffed. A little snubbed. I couldn't sleep at all last night. And it's all because Mr. Ratburn from "Arthur" came out as gay, had himself a big old wedding, and didn't invite any of us. (Or even advertise that it was happening.)

On one hand, it's too bad that (due to the lack of aforementioned advertising) I wasn't able to call up my old childhood friends so we could watch the happy sight of two anthropomorphized and consenting rats tying the knot.

On the other it's just as great that pretty much nothing was said about Mr. Ratburn's sexual orientation until he shared the fact that he was getting married (to a dude-rat) with Arthur and Friends during the premiere of the show's 22nd season. Because it's literally not that big a deal! Gay people exist! And some of them are friendly, talking animals who can teach you a thing or two about not skipping school, Francine!

I was thinking of explaining why that's great in just two reasons but I realize that I have a lot to say about a cartoon rat getting hitched, so here's a brief list of reasons why Mr. Ratburn's wedding is great for all of us:

Of course, the biggest surprise for many people isn't that Mr. Ratburn is gay; it's that "Arthur" is still airing new episodes in 2019.

I think the biggest surprise about Mr. Ratburn from Arthur being gay is that I'm just now finding out that Arthur i… https://t.co/iBoX8aEVpz
— Erica Mendez (@Erica Mendez) 1557793917.0

Today, Mr. Ratburn's marriage is news because he's gay, but the overwhelmingly positive response the episode's gotten shows that we're moving in a new direction. That representation matters. And that more and more LGBT+ characters are becoming people (and rats) rather than just tropes. I just wish they'd invite us all to their weddings.

From Your Site Articles
Love Stories

She made him act out his reaction to seeing the photo, saying he was "speechless," and when she looked at the photo she started crying. McLeodd recognized her mother because of the pictures Menzies keeps in her room. Cue the "awws," because this is so cute, I'm kvelling.
From Your Site Articles
Health

A simple idea with big impact.

A simple solution for all ages, really.

School should feel like a safe space. But after the tragic news of yet another mass shooting, many children are scared to death. As a parent or a teacher, it can be an arduous task helping young minds to unpack such unthinkable monstrosities. Especially when, in all honesty, the adults are also terrified.

Katelyn Campbell, a clinical psychologist in South Carolina, worked with elementary school children in the aftermath of the Sandy Hook shooting. She recently shared a simple idea that helped then, in hopes that it might help now.

The psychologist tweeted, “We had our kids draw pictures of scenery that made them feel calm—we then hung them up around the school—to make the ‘other kids who were scared’ have something calm to look at.”

For Teachers/Therapists: I worked in a CT elementary school when Sandy Hook happened.

What helped: We had our kids draw pictures of scenery that made them feel calm—we then hung them up around the school—to make the “other kids who were scared” have something calm to look at.
— Dr. K8 PsyD (@psych_k8) May 25, 2022

“Kids, like adults, want to feel helpful when they feel helpless,” she continued, saying that drawing gave them something useful to do.