Ibtihaj Muhammad, who made history at the Rio Olympics, is the newest Barbie doll. 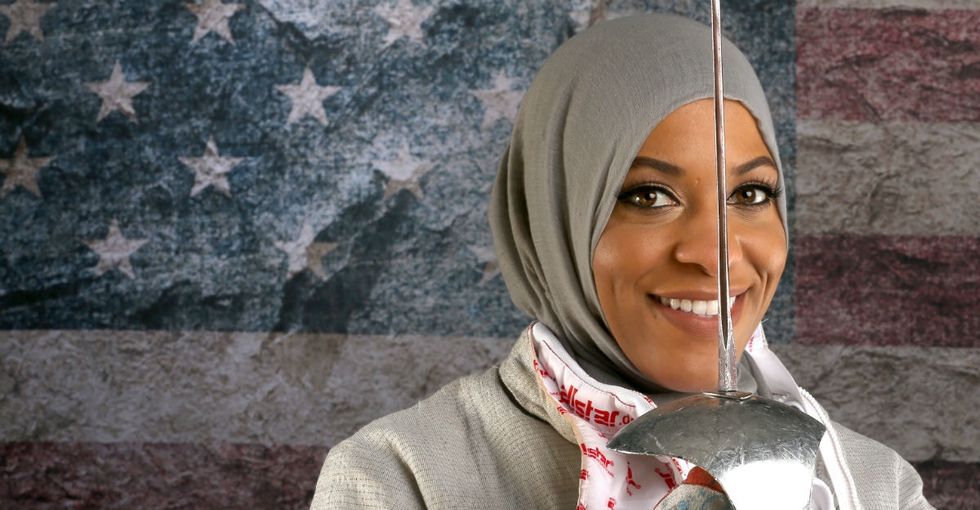 If the name Ibtihaj Muhammad doesn't ring a bell, it definitely should.

Muhammad represented Team USA at the Rio Olympics last year in fencing. She wore a hijab while competing — the first time an American athlete had done so.

On Nov. 13, Mattel unveiled a new Barbie doll inspired by the champion fencer at Glamour's Women of the Year summit.

And it's pretty darn cool.

This is the very first time Barbie is rocking a hijab, which many Muslim women choose to wear in recognition of their faith.

"When I think about my own journey, me being a Muslim girl involved in the sport of fencing, there were people who made me feel like I didn’t belong," Muhammad said at the summit.

"For all those people who didn’t believe in me, this Barbie doll is for you."

The groundbreaking new Barbie marks another step forward for Mattel, which has focused on creating dolls that are more inclusive and positive for girls and boys.

Throughout the decades, Mattel has (understandably) been hammered by many parents who've seen the Barbie brand as promoting unhealthy messages on body image and self-worth as well as suggesting beauty is linked to a certain, discriminatory look  (I mean, how many blonde-haired, blue-eyed Barbies does a kid really need?).

More recently, however, Mattel has made efforts to feature dolls that represent girls and women of color and a variety of body types. In November 2015, Mattel launched a campaign featuring a boy playing with a Barbie doll with his friends — "So fierce!" he exclaims in the ad. A month before that, it released a clever commercial (seen below) that encourages girls to dream big when it comes to their futures.

"When a girl plays with Barbie, she imagines everything she can become," the ad tells viewers in its conclusion.

It's an inspiring message Muhammad hopes her new Barbie doll will help spread.

"Today I’m proud to know that little girls who wear hijab — and, just as powerfully, those who don’t — can play with a Barbie who chooses to wear a headscarf," Muhammad said at the summit. "She’s a Barbie who is strong enough to wield a giant sabre and dedicated enough to spend years working her way to an Olympic medal."

More of this please, Mattel.