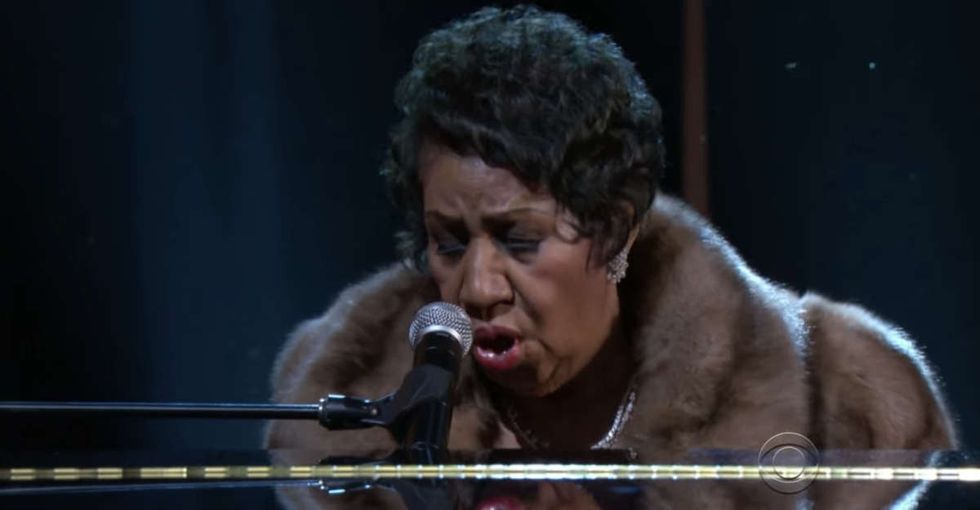 More specifically, there are performances that you walk away from thinking, "Yeah, cool. Cool concert."

Then there are the kind of performances that people talk about for years. The kind that makes them run home immediately to kiss their children and pets and tell all their friends how much they truly love them. The kind that makes grown men weep, babies talk, and cats and dogs put away their differences forever.

Aretha Franklin just gave one of those performances.

It happened at the Kennedy Center Honors in Washington, D.C., where dozens of artists, politicians, and general bigwigs had gathered to pay tribute to songwriter Carole King — among others.

The ceremony was humming along pretty much pleasantly, when the 73-year-old Franklin stepped up to the mic and busted out a jaw-dropping rendition of "(You Make Me Feel Like) A Natural Woman," which King wrote for the singer in 1967.

There once was a time where performances like these were once-in-a-lifetime occurrences, never to be experienced again like they were that very first time. (Yes, Aunt Cindy, I do wish I had been alive to see Country Joe and the Fish at Woodstock. I'm extremely sorry I wasn't.)

The performance inspired a lot of feelings among the assembled guests, including...

...and later pumping his fist in triumph.

An entire crowd of fancy, tuxedo people leaping to their feet.

Yep, that's everything. Everything anybody could want out of anything.

It's a true must-watch.

I won't blame you if you don't watch it. But you'll be cheating yourself. And Aunt Cindy will never let you live it down. (Yes, yes! I know, Aunt Cindy. My generation will never experience such a sublime a moment of peace and togetherness.)

Please do yourself a favor and go watch it. It's my New Year's gift to you and yours.