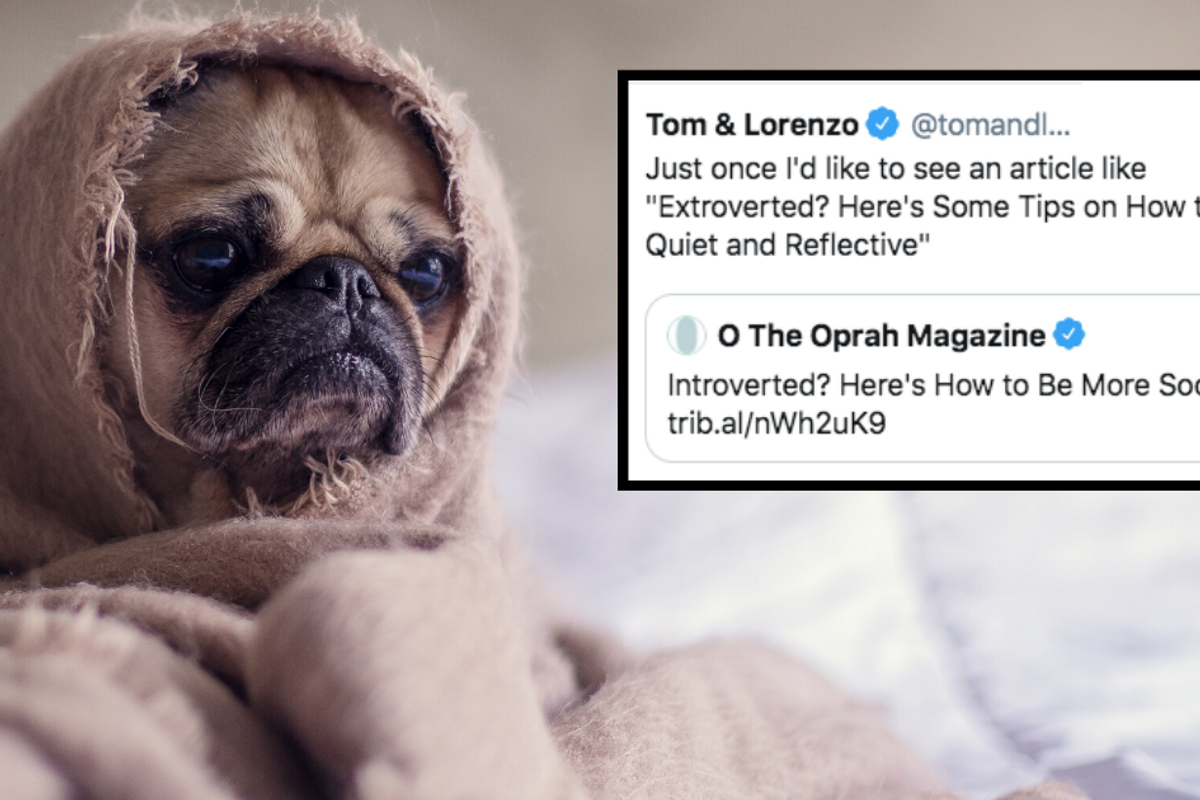 Photo by Matthew Henry on Unsplash

As we all know, there's a wide range of personalities out there. Some of us have tons of friends and acquaintances and love to spend our free time socializing. Some of us have a cadre of companions, but prefer cuddling up on the couch with a cup of tea and our own company. Many of us find ourselves somewhere in between, enjoying spending time with other humans and also needing our alone time.

We've come up with labels for these different personalities—the social butterflies are extroverts, the social hermit crabs are introverts, and those who flip back and forth are ambiverts. Extroverts get their energy from being around other people. Introverts charge their batteries in solitude. Ambiverts need both.

There's nothing inherently wrong with any of these personality traits, of course. People are who they are. Where we run into trouble is when extroverts are portrayed as the default or ideal, and introverts are seen as defective.

This is what happens. All. The. Time.

Let's say your friends invite you to go out on Friday night, but you're wiped out from a week of people-ing. You don't want to disappoint anyone, but you'd honestly rather sit at home and watch a movie by yourself. You might be open to inviting one good friend who you know won't talk during the film, but that's it. Going out to socialize with a bunch of people—even people you know and love and enjoy spending time with—just sounds draining.

RELATED: 10 comics explain what it's really like to be an introvert.

That's a pretty standard introvert scenario, but it can cause consternation in extroverts who don't understand why going out isn't a stress release for everyone. Responses from "Is everything okay?" to "What's wrong with you?" get tossed at the person who feels fine but just needs some down time. No, I'm not depressed. No, I'm not mad at anyone. No, I don't hate people. I just need to be alone for a while to let my batteries recharge.

Part of the reason society automatically views introverted habits as problematic is because there is some overlap with habits of people experiencing depression or other mental health struggles. Isolating oneself can be a sign of something wrong, but that doesn't mean it automatically is.

And what's interesting is that we almost never see extroverted habits as signaling something wrong. Someone who goes out and socializes regularly is simply seen as fun and outgoing. Rarely do you see anyone say, "What's wrong with you that you don't want to be alone?" or "What feelings are you avoiding if you have to be around people all the time?" Our society values sociability and rewards extroverts—not only with opportunity (extroverts have a clear leg up when it comes to job interviews), but also with the emotional benefit of the doubt. Wanting to be around people is seen as healthy. Wanting to be alone is a seen as a warning sign.

And then there's the emphasis—or overemphasis, perhaps—on talking in our society. Westerners value "speaking your mind" and the public sharing and debating of opinions has been a hallmark of Western civilization since ancient times. If you go out to any public place in the U.S., you'll see people talking—a lot.

People converse everywhere, of course, but a year of living in Japan showed me that being with other people doesn't automatically mean constant talking. In our culture, silence feels awkward and people feel the need to fill the empty space. In Japan, friends chat, but there's no weirdness in silence and no expectation of small talk with strangers or acquaintances.

Small is very much a part of American culture, but that doesn't mean it comes natural to all of us. For introverts, small talk is often painful, and can make us feel like we don't fit in within our own culture. But again, making small talk is valued as the norm and people who struggle with it are seen as defective. Nevermind that perfectly healthy people from other countries have to learn the art of American small talk, especially those who come from countries where it's not only uncommon, but inappropriate to chit chat about unimportant things.

RELATED: We Can't All Be Extroverts. Just Ask This Once Painfully Shy, Famous, Talented Introvert.

My introverted husband once took an Uber after a long day of working with people. He got a negative review from the driver, who simply wrote, "Not much of a conversationalist." This was a person my husband paid to drive him someplace—why the expectation of chattiness? I have no doubt that my husband was courteous—he's never not courteous—but he was quiet. And for wanting to sit in silence and think instead of shooting the breeze with a stranger he'd likely never see again, he was seen in a negative light.

Thankfully, awareness of the value introverts bring to society is slowly growing. There's no shortage of quippy memes and comics and tweets about #IntrovertLife. We have articles explaining how some habits of introverts can serve as healthy examples for everyone, as well as books like Susan Cain's "Quiet: The Power of Introverts in a World That Can't Stop Talking." But we still have a ways to go in changing societal perceptions of extroverted vs. introverted tendencies.

Let's embrace the positive aspects of all personalities and honor what each individual brings to the table—even when that means a table for one.