An education for the guys I overheard talking about their 'teacher friend.'

If you think teaching is easy, you're wrong. 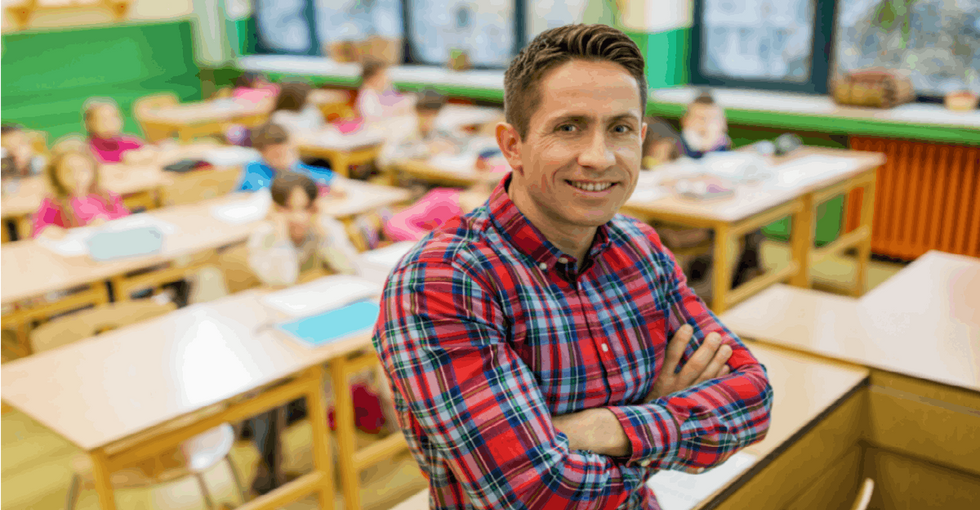 Dear guys on the train,

I must apologize for starters. It’s all my fault. I was eavesdropping. I tend to do that on the Red Line. Unlike most folks who keep their earbuds in and their music up loud, I don’t want to miss anything. I’m a chronic people-watcher. And lately, I’ve found that paying attention can be a ministry in itself. So, that’s really all I was trying to do.

Anyway, enough about me. Let’s talk about you guys.

“Dude, he never goes out anymore. Ever. He’s like a hermit.”

“God, I wish he knew what it was like in the real world for a day. He thinks his job is so hard.”

“Yeah, and he’s been a cheapskate ever since we left Ann Arbor.”

“Seriously. Try living with him. But he can’t expect to make as much as we do when we work our asses off year-round. It’s only October and, I mean, he’s got fall break coming up and he’ll be off for Thanksgiving and he gets several weeks off at Christmas time, yet he thinks he’s got it rough.”

Then you guys got off at the stop before mine and left me thinking. The more I thought about it and replayed your conversation in my mind, I knew I had to write you.

I don’t know your other friend Josh, but he’s clearly not as cool as you guys, going out on a Wednesday night at 10 for beers with Taylor.

From what I gathered, you guys are sick of your teacher friend. You’re annoyed at how frugal he is, how early he goes to sleep, and how much time off he gets.

The thing is, I wanted to speak up so badly, but I suppressed my inner thoughts, which were bursting at the seams, and withheld from butting into your conversation.

You see, I wanted to inform you I was a public school teacher for several years. I taught high school, sixth grade, and first grade. I resigned after this past school year ended because I couldn’t take it anymore. I wasn’t cut out for it.

I wanted to ask you if you’ve ever had to run on a treadmill for eight hours straight on a speed that’s just a tad too fast. That's the only way I could describe the physical exhaustion of being a teacher.

I wanted to correct your assumption that Josh’s workday ends at 3 p.m.

As a former teacher, I can’t help but offer you a mini-lesson: Teachers arrive before school begins and stay long after it ends. They spend countless hours in the evenings, on weekends, and especially during their “long breaks” completing lesson plans, grading assignments, filling out behavior charts, calling parents, scheduling meetings, updating individualized education programs, preparing for standardized tests, writing out goals, changing the theme on the bulletin board, buying supplies for a science experiment (in an effort to make learning fun in hopes that the kids will love it), coaching sports, tutoring, entering grades, cleaning the classroom, filing paperwork, communicating with necessary colleagues about specific student needs, etc. I guess it’s not a mini-lesson after all. Oops.

I wanted to challenge you to work all day without using the restroom once, to eat your brown-bagged lunch in less than seven minutes, and to stay patient when you have 20-something students in desperate need for your attention and you just want to reply to an email.

I wanted to break it down for you so you could better understand why Josh is frugal — why, aside from being utterly exhausted, he doesn’t go out as much anymore. For pennies each hour per student, he’s busting his butt to ensure they are not only educated but taught to be kind and courageous, and are safe and loved.

I wanted to reminisce on my time in the classroom and share with you about the students whose home lives kept me up at night and the emotional toll this took on me and my marriage.

I wanted to make you ponder the differences between your jobs and his, but I’m afraid we would’ve run out of time. I’ll just throw this one out there: You can probably get away with being tired (or even hungover), whereas Josh has to be on from the minute those kids arrive in the morning.

I wanted to tell you that, in case you weren’t aware, teachers don’t fill out expense reports at the end of each week. It all comes out of their pocket. And only a guy like Josh would be cool enough to sacrifice a beer in order to buy scissors for his third-graders.

I wanted to give you a hundred ideas for how you could be supportive of Josh and the selfless job he’s chosen.

I wanted to acknowledge your jobs are probably hard, too, but gently remind you that you’re probably at least respected and compensated. Teachers can’t earn bonuses or raises. The incentive to be the best boils down to the heart and a strong dose of integrity.

Look, I know I don't know you. And I can't possibly know the whole context of your conversation. But I used to be a teacher, and I know how your friend Josh might be feeling. I know what it's like to have friends who don't get that feeling. I couldn't say these things to them at the time, but hearing your conversation reminded me of the things I wish I had.

I wanted to let you know I now work in “the real world” and it’s only reaffirmed my once-biased belief that teachers have one of the hardest, most important, undervalued, and underpaid jobs in the world.