An artist saw hundreds of plastic bags stuck on a barbed wire fence. It gave him an idea. 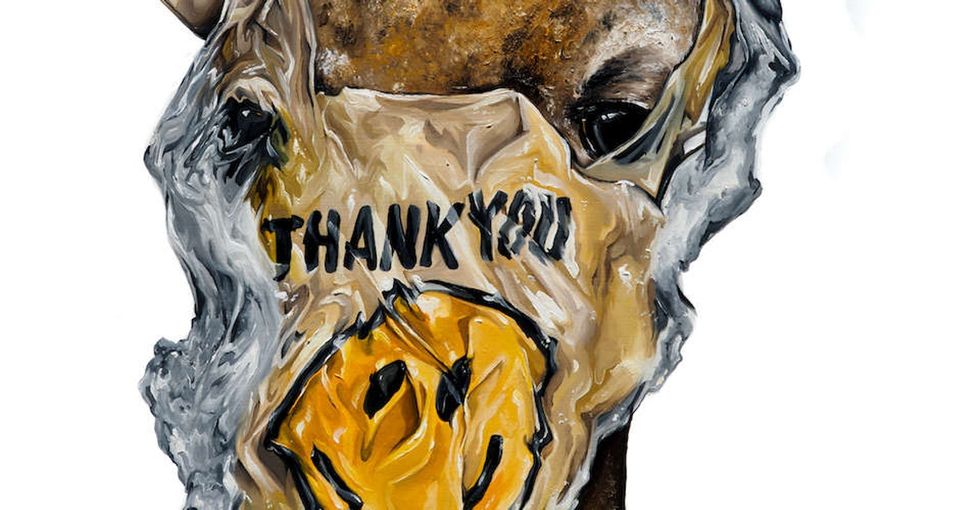 Corban Lundborg has tagged old rail yards in Minneapolis, drawn tattoos in South Korea, and traveled to over 50 countries taking photos for the U.S. military.

In all of Lundborg's adventures, there's been one constant: plastic litter.

The reality hit the artist hard during a stint in Cape Town, South Africa, where he shared a home with his girlfriend, two roommates, and a small mini-fridge. On frequent trips to the supermarket, he noticed clerks would often bag each item individually, resulting in an explosion of plastic.

Much of it wound up on the sidewalks and streets.

"The wind picks it up and blows the plastic all into the barbed wire fences," he recalls. "And then it just blows in the wind and you have these like plastic barbed wire flags just waving everywhere you look around the city."

Back home in Los Angeles, he set about incorporating that stark, disquieting image into his art.

Originally conceived as a physical installation, he ultimately settled on a painting project. With a series of colorful brushstrokes, the pieces depict wild animals, their faces melding into the plastic as it consumes them.

All images by Corban Lundborg.

The images are playful, but the implications are serious.

He hopes his art helps call attention to the proliferation of plastic waste, much of which, ultimately, winds up in our oceans.

"Single-use" packaging, like shopping bags, is the largest category of such trash found in or around bodies of water, according to an April 27, 2017 Huffington Post report.

Lundborg believes everyone has the capacity to contribute something to the clean-up effort — particularly governments and businesses.

He's been encouraged by the proliferation of plastic bag bans, though he'd like to see more investing in alternatives to plastic.

For individuals, it may be as simple as bringing reusable bags to the supermarket, as he and his girlfriend started doing in Cape Town.

"If we could just start small, I think we could see progress," he says.

You can check out more of Lundborg's art and photography here.