America, we're better than this. And these moments prove it. 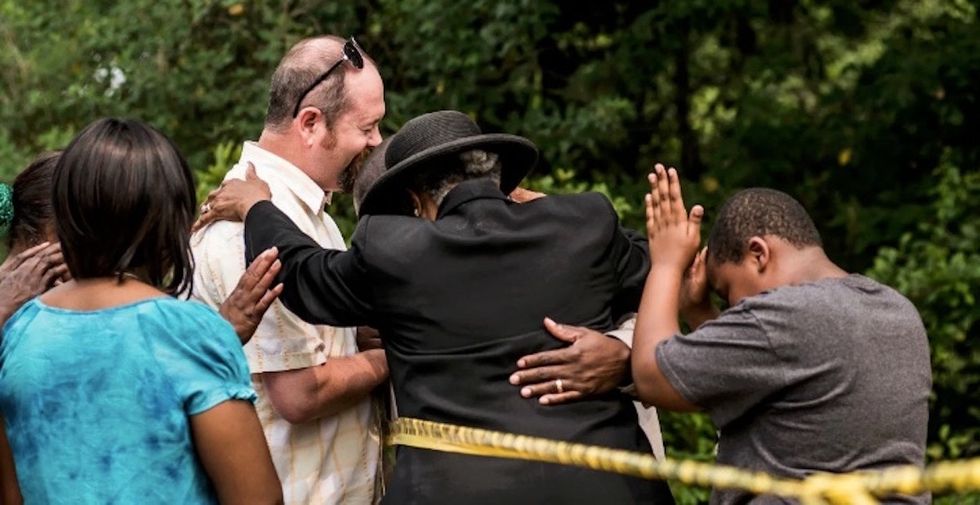 The internet is plastered with headlines about how our country is falling apart.

But I believe we're better than that.

There are so many tiny reminders every day that there's a silent majority of great Americans doing important, kind, beautiful things — from Muslims supporting parishioners from burned Christian churches to a Baptist church embracing refugees to a Broadway cast celebrating peeing wherever you please.

While it might seem like we're on the wrong track, humans show us every day that there's still hope. Let's take a closer look at seven ways America is better than we know:

1. Bigotry. We're better than that!

Some guy with weird hair who I'm TOTALLY NOT WORRIED ABOUT sent out a campaign press release saying this about Muslims:

"Donald J. Trump is calling for a total and complete shutdown of Muslims entering the United States until our country's representatives can figure out what is going on."

But tell that to the group of Muslim activists and organizations that raised over $100,000 to help black churches in South Carolina rebuild after they were burned in the wake of the Charleston shooting.

These Muslim activists are a reflection of good people helping one another, but their generosity also embodies the Muslim principle of neighborliness. The Prophet Muhammad said, “He is not a believer whose stomach is filled while the neighbor to his side goes hungry."

In a previous interview with Upworthy, religious scholar Najeeba Syeed explained it poignantly: "In Ramadan you give to one's neighbor no matter who that neighbor is. You don't ask if that neighbor is Muslim, you just give."

However you feel about the subject, Roe v. Wade legalized abortion in America. American women's right to an abortion was affirmed on the day of that ruling, and that's great.

But despite that Supreme Court ruling, tiny laws have been making abortion less and less available. According to Planned Parenthood:

Cecile Richards, president of Planned Parenthood, said, "Rights aren't worth a damn if you can't access them." It's true.

Image via Library of Congress/Flickr.

Plus, the Supreme Court recently ruled against limitations on access to abortion in the case of Whole Woman's Health v. Hellerstedt. Justice Stephen Breyer wrote in his majority opinion: "In the face of no threat to women's health, Texas seeks to force women to travel long distances to get abortions in crammed-to-capacity superfacilities."

See? We're better than that.

But we're not showing it.

We have a LONG WAY TO GO.

In a recent statement on police brutality, President Obama said, "To admit we've got a serious problem in no way contradicts our respect and appreciation for the vast majority of police officers who put their lives on the line to protect us every single day. It is to say that, as a nation, we can and must do better to institute the best practices that reduce the appearance or reality of racial bias in law enforcement."

Projects like The Guardian US's "The Counted" give me hope, though, that we're trying to be better than this. The project counts the number of people killed by police in America each year and pushes these stories to the forefront of conversation.

4. Not believing in our effect on the environment? We're also better than that ... and there's proof.

Over half of congressional Republicans reject climate change science. In response to a question from the Cincinnati Enquirer about what it would take for the Senate majority leader to take climate change seriously, Mitch McConnell of Kentucky said: "I’m not a scientist. I am interested in protecting Kentucky’s economy, I’m interested in having low cost electricity."

But guess what? We're better than this, too!

President Obama, in his State of the Union Address, seemed to respond directly to this comment: “Well, I’m not a scientist, either. But you know what? I know a lot of really good scientists at NASA, and at NOAA, and at our major universities ... and the best scientists in the world are all telling us that our activities are changing the climate.”

And check this: According to a study in Science, the giant hole in the ozone is getting smaller.

According to Vox, this depletion is due to humans working together to save their planet:

"Under the Montreal Protocol of 1987, the world's nations agreed to phase out the use of CFCs in refrigerators, spray cans, insulation foam, and fire suppression. By and large, countries complied. Atmospheric concentrations of chlorine have stabilized and have been declining slowly over time."

5. That whole North Carolina "stay-in-the-right-bathroom" thing? We're so much better than that.

North Carolina's legislature passed a bill that prevents local governments from allowing folks to choose a bathroom based on the gender they identify as, and it was not great.

But instead of running with this law, here's what's happening in the world: The Tony Award-winning Broadway show "Kinky Boots" (which just happens to feature a main character who is a drag queen) made a video titled "Just Pee."

It's been viewed over 9.3 million times on Facebook alone. The population of North Carolina is 9.9 million. And people are speaking out about this issue everywhere, in every state.

But we have a long way to go here too.

But then people tried to get him off his show, "Grey's Anatomy," for being a truthful person who says truth!

But ABC cares about diversity. How? Well, Shonda Rhimes works there. And its new president is an African-American woman. And it has a whole series of fellowships dedicated to making sure its writers and directors (among others) come from diverse backgrounds.

So, in response to that backward petition came ABC's forward-thinking policies, already in effect:

7. Finally, Christian intolerance. We're better than this, too.

Many folks know the Southern Baptist Church for its intolerance. A devout Baptist, President Jimmy Carter even announced that he was leaving the church because of its intolerance.

But as Samantha Bee recently pointed out in her piece on the Brexit, many Evangelicals (she says there are 15 million in America) are rebelling against the GOP and welcoming refugees in to their homes and churches.

When you dig just a little deeper and look beyond the news — when you look at what real humans are up to in the real world — you might be surprised at what you see.

Here's to MORE stories about that, and to making changes together that show how much better we can be.